Ctrip.com (TCOM -3.51%) showed robust growth across all of its lines in its quarterly earnings report on Wednesday and showed impressive leverage. The stock was down 3% at 3 p.m. on Thursday.

Concerns about slowing growth at China's leading online travel agency (OTA) make sense given the company's torrid past rates. But two things should stand out from the report: Ctrip continues to grab market share, and this is increasingly becoming a winner-takes-all field, as growing margins show the company's operational leverage. 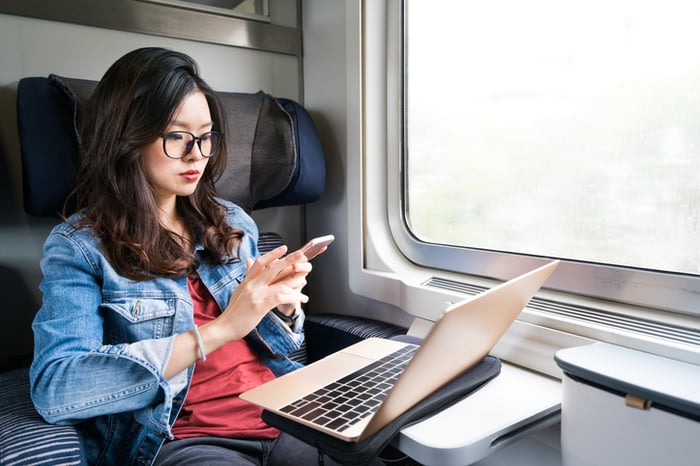 While I'll dive into the details below, here are the headline numbers from the company's release:

Heading into the quarter, management had expected revenue to jump between 40% and 45%; results came in ahead of expectations. The recent addition of the Skyscanner businesses added meaningfully to results as well.

More importantly, gross profit expanded 763 basis points to 80.44%. This means Ctrip is spending less on its inventory of air, bus, train, and hotel accommodations. Three years ago, this would have been unthinkable, as the industry was caught in a race to the bottom on price.

Since the effective merger with rival Qunar, though, that has all changed. Ctrip is now the de facto OTA in China, and that gives the company leverage over airlines and hotels -- instead of the other way around.

Operating profit margins -- after backing out share-based compensation -- also expanded meaningfully: 1,525 basis points to 15.37%. Last year was full of costs associated with integrating Qunar and Ctrip. This year, those are in place, and it showed as non-GAAP operating expenses jumped just 31% against the backdrop of a 46% increase in revenue.

Ctrip has four main segments that report. As you can see, the first two make up the lion's share of sales. But all four continued to show strong growth.

Accommodations grew mostly through increased organic volume. Transportation was juiced both from strong growth in the core of air travel, additions from Skyscanner, and the small but booming base of business emerging out of bus and train tickets in China.

Perhaps some of the reason for the market's tepid reaction has to do with skepticism of the company's ability to grow organically. But these same concerns surfaced after the addition of Qunar, and the increase in profitability more than made up for top-line growth concerns.

Founder and Chairman James Liang made it clear that the company will continue to focus not only on travel within China, but outside of it as well:

By leveraging Skyscanner and other strategic overseas investments, we expect to further strengthen our international product offerings and improve user experiences for both Chinese and international travelers.

CEO Jane Jie Sun said Ctrip has "also been making great strides in penetrating into lower-tier cities." That, combined with the aforementioned push for international travels out of China, appears to be the company's focus moving forward.

The good news for investors is that these investments are unlikely to cost as much as those from years past.

After factoring in this quarter's results, shares of Ctrip now trade for 80 times non-GAAP trailing earnings. For the current quarter, management is expecting revenue to continue growing between 40% and 45%.