Toyota Motor Corporation (NYSE:TM) said on May 10 that its net income in the quarter that ended on March 31 fell 6.6% to 398.4 billion yen ($3.5 billion), as unfavorable exchange rate moves more than offset a 6.8% increase in revenue.

Toyota's shares opened about 2% lower in New York after the news was released. 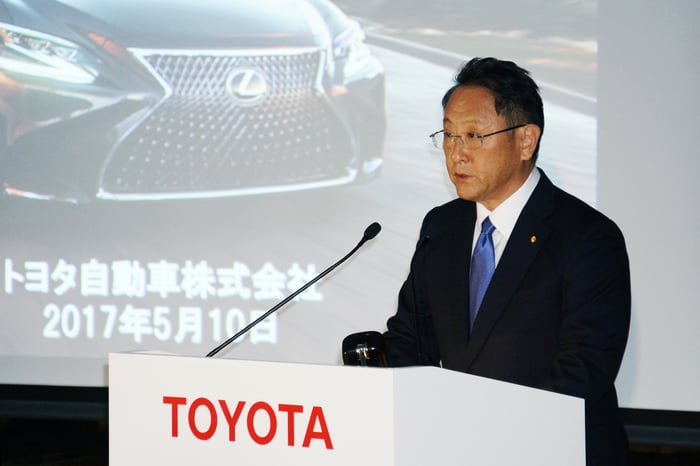 Why Toyota's full-year profit fell from a year ago

Toyota's 21% drop in full-year net income was its first year-over-year drop in five years (though its operating profit was down year over year in 2016). But CEO Akio Toyoda said, that drop was largely a result of the strengthening of the yen against other currencies, particularly the U.S. dollar, and didn't accurately reflect the underlying state of the business.

Toyota's ongoing global cost-reduction effort was able to save the company about 440 billion yen versus the year prior, and improved sales and a better "mix" of models sold gave results an additional boost of about 210 billion yen.

Those gains, however, were offset by increased expenses, largely related to Toyota's introduction of a new modular vehicle architecture, called Toyota New Global Architecture, or TNGA. TNGA is expected to reduce Toyota's new-product development and manufacturing costs significantly over time, but it has required significant up-front investments. Overall expenses were up about 530 billion yen from the year prior.

What Toyota's CEO had to say

During Toyota's earnings press conference, Toyoda said that he thinks the company's latest products are on the right track -- but there's still work to be done on the manufacturing side:

Until now, there were times when Toyota's cars were called "boring" or were said to be lacking in character. But I now feel that, in terms of driving and design, our customers have begun to favorably evaluate our cars.

On the other hand, when it comes to making ever-better cars in a smart way, it is becoming apparent that there is still room for improvement.

For example, might it not be the case that an over-enthusiastic desire to make ever-better cars is putting priority on improving our competitiveness in terms of performance and quality, while leaving issues of cost and lead time for later?

Or, is the way we work capable of thoroughly implementing the basic principle of "appropriate sales price minus appropriate profit equals ideal cost"?

In other words, I feel a strong sense of crisis about whether or not we are actually executing car-making from the perspective of the customer in all Toyota workplaces -- from development, production, procurement and sales, all the way to administrative divisions.

Looking ahead: Toyota's guidance for fiscal 2018

As mentioned above, Toyota's guidance for the upcoming fiscal year ending March 31, 2018, is somewhat pessimistic.  The company expects: