The venerable media company recorded its highest number of new digital subscriptions ever in the first quarter of 2017.

The New York Times Company (NYT 0.14%) reported credible first-quarter earnings on May 5, as digital revenue offset continued declines in the company's print media business. Excuse the pun, but after we review the "headline" numbers, we'll delve into the quarter's details, as well as the Times' subscription and revenue outlook. 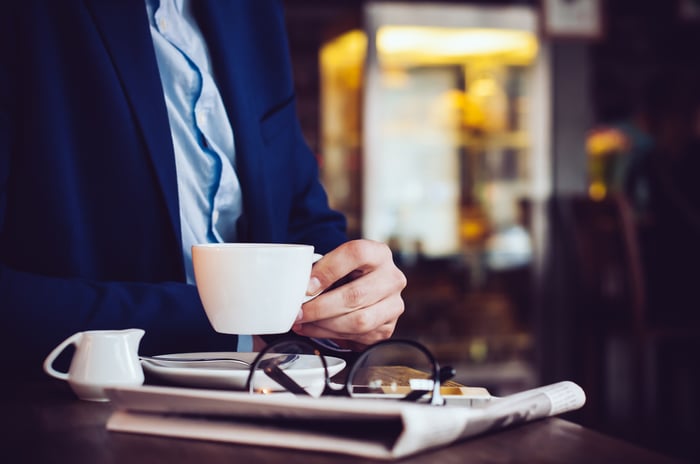 As in the last sequential quarter, a portion of the huge ramp-up in digital subscriptions is seen as an effect of the 2016 election and current news cycle, in which attention to the evolving Donald Trump presidency appears to correlate with higher interest in The New York Times content.

Given this event-driven boost, investors are naturally concerned with the retention of new subscribers. CEO Mark Thompson treated this topic in detail during the company's earnings call with analysts, stating the following:

We've seen an overall picture of an improvement in churn, which has been pretty consistent now for many quarters. Although it is too early to be certain that, that will continue with the very large number of new subscribers that we've had essentially around 1/4 of the whole that arrived in recent months.

I think it's fair to say the early indications about retention in the early months are very encouraging relative to the previous cohorts coming in. These are subscribers, the overwhelming majority who are on introductory offers. We moved to longer introductory offers some time ago. And that is a, we think, is a significant factor in improved churn numbers. Because it turns out the long introductory offers, where people get habituated to Times, come to value it, are better at retaining subscribers.

While the Times doesn't provide quarterly financial guidance, it does provide a rough overview of revenue outlook trends. In the second quarter of 2017, the organization sees total circulation revenues increasing at a "similar rate" to Q1 2017, while the rate of new digital-only subscriptions is expected to slow versus the last two sequential quarters. Total advertising revenues are expected to dip in the low- to mid-single digits against Q2 2016, which is roughly similar to the current quarter's decline. In sum, performance may not be quite as sterling as the first quarter, but the Times hopes to maintain its digital subscriber momentum through the rest of 2017.

The New York Times Calls It Quits With Apple News
401%