Brian Withers
(TMFBwithbike)
Author Bio
Brian Withers has been a Fool since 2004 and loves to invest in companies that are disrupting the status quo. His best investment was to get his kids into Foolish stocks at the young ages of 5 & 7. Prior to starting his contract writer role with The Fool, he spent 30 years between IBM, Dell, and Allergan helping make their operations run better. When he's not writing, you can find Brian riding his bike around the Research Triangle Area in North Carolina. Feel free to reach Brian via email: bwithbike@gmail.com.
Follow @bwithbike
When the number one company in comfort-casual footwear, Skechers (NYSE:SKX) announced earnings last month, the headlines highlighted the first ever $1 billion quarter for the company. It seems investors weren't impressed, though, as the stock continues to lag behind the market and has missed a nice run up over the past year. 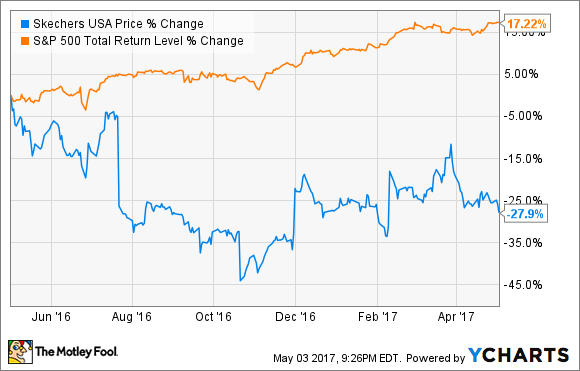 Management is working to get the company back to a consistent growth path. There were a number of key facts from the latest earnings call that you might have missed that are important building blocks for continued long-term growth for the company. Skechers is quietly building its domestic e-commerce business, continuing to open stores across the globe, and now getting a majority of its revenue from international sources.

Here are the details on what you may have missed. 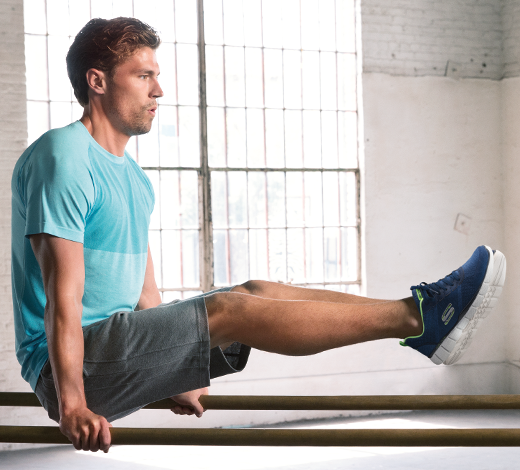 One sentence from the earnings call wasn't elaborated on, nor were there any analyst questions about it. David Weinberg, Skechers chief operating officer and chief financial officer, mentioned it in the middle of his introduction of the business results for the quarter.

Adding to the growth in the quarter was our domestic e-commerce business, which grew by 23.5%.

The same statement shows up from the Q4 earnings report, indicating growth of 36.3%, and in the Q3 report with 13% growth. The last mention before that was in 2014, where domestic e-commerce was called out as negative 4.5% for the fourth quarter and only 1.1% of overall revenue.

In 2015, Skechers combined the e-commerce results into the retail segment numbers, and the performance hasn't been reported separately until recently. With the overall growth trend of web commerce, it's good to see that Skechers is able to provide a convenient way to buy online that is catching on with its customers.

While domestic e-commerce for Skechers is still small, it's certainly something to watch for in upcoming earnings releases. Success with the company's dot-com business is exciting, but the company remains heavily reliant on its brick-and-mortar stores.

Skechers has 59 more company-owned stores than last year, an 11% increase in its store base. Fourteen of these stores opened in the first quarter, and slightly over half of the new stores opened outside of the U.S. in the last year.

Skechers management continues to open stores despite the difficulties in the retail space. David Weinberg stated on the call that, "...while the domestic retail environment remains challenging, we believe our product is unique and will appeal to those seeking style and value." These new stores have paid off for Skechers, and helped deliver 12.8% growth in its retail segment.

Skechers is continuing to open stores in key global markets to "further build the brand and meet consumer demand." The company has already opened six stores in the current quarter on the way to an additional 55 to 70 stores for the remainder of the year.

As I've covered in this article, Skechers branded stores are a competitive advantage for the company, providing critical supply chain data, superior gross profit, and the ability to limit product markdowns. Concept stores, a subset of the company-owned stores, are especially important for driving growth and brand awareness in international countries. Skechers has already opened eight of these concept stores in 2017. These new stores further enhance the Skechers brand, and should drive additional revenue growth for the company, especially outside the U.S.

Skechers is now an international company

We expect this number to continue to grow as we increase our presence in these markets that have transitioned to subsidiaries and joint ventures and as we introduce new lines worldwide later this year. -- David Weinberg, COO and CFO

China remains a bright spot for the company with a significant 39.6% growth in the most recent quarter and 2,110 points of sale across the country. It wasn't all positive around the globe, though, as the U.K. struggled with currency headwinds and store closings, leading to negative growth for the country. Even so, international growth was a healthy 16.8% overall.

Now that Skechers domestic revenue accounts for less than half of revenue overall, this international company is in a stronger position to weather weakness in the domestic market.

A growing domestic e-commerce business, continued store openings, and healthy international growth are three reasons to continue to watch as this company tries to get its stock moving in the positive direction.