Please ensure Javascript is enabled for purposes of website accessibility
Log In Help Join The Motley Fool
Free Article Join Over 1 Million Premium Members And Get More In-Depth Stock Guidance and Research
By Daniel B. Kline - Updated May 12, 2017 at 2:01PM

It's a new record, and one category is leading the way.

While many Americans have cut back on how often they eat out at restaurants and what they spend on other discretionary purchases, they will not be cutting back when it comes to showing mom what she means to them.

In fact, 2017 Mother's Day spending will reach an all-time high, topping last year's splurge, which had also set a record, according to a report from the National Retail Federation (NRF) that was conducted by Prosper Insights & Analytics. Shoppers for the holiday honoring mothers are expected to spend an average of $186.39 each, an increase from last year's $172.22. Total spending will hit $23.6 billion, up from $21.4 billion in 2016, for the holiday that 85% of consumers say they will celebrate, according to the survey.

To put that number into perspective, the NRF forecast that U.S. consumers would spend an average of $136.57 on this past Valentine's Day, dropping total spending from $19.7 billion in 2016 to $18.2 billion this year. Of course, all holidays pale in comparison to the Christmas season when the average American was estimated to spend $935.58 in 2016 on everything including, but not limited to, gifts for others, spending on items for themselves, food, flowers, decorations, and greeting cards.

"With spring in full bloom, many Americans are looking forward to splurging on their mothers this Mother's Day," NRF CEO Matthew Shay said in a press release. "Retailers will be ready with a wide range of gift options and a variety of promotions for their customers." 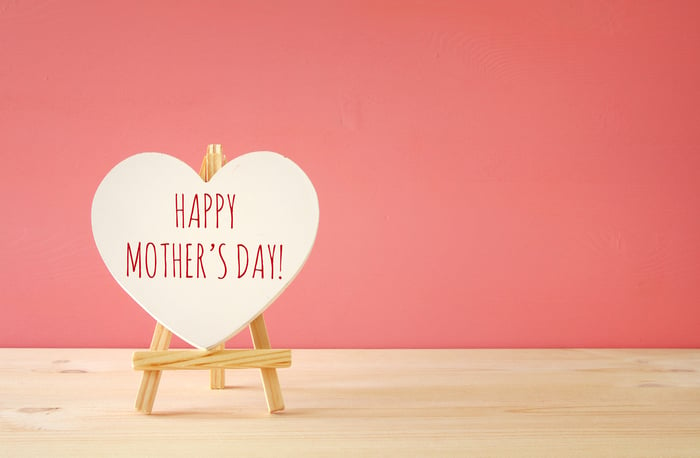 What are Americans buying?

The increase in spending will, according to NRF, be driven by a 19% increase in jewelry purchases, and a 15% rise in the personal services category such as a trip to the spa. American consumers say they plan to spend $5 billion on jewelry, which will be bought by 36% of shoppers, and $4.2 billion on special outings such as dinner or brunch, which over half (56%) of respondents said they will spend money on.

Those categories will be followed by the $2.6 billion spent on flowers and purchased by 69% of the American shopping public and $2.5 billion spent on gift cards, which 45% will buy. After that 37% of consumers will spend a total of $2.1 billion on clothing while $2 billion will be spent on consumer electronics and $1.9 billion will go to personal services (24%), NRF reported.

"Consumers are planning to open up their wallets a little bit more to celebrate the women with the most important jobs in the world on Mother's Day," Prosper Principal Analyst Pam Goodfellow said in a press release. "We will see older Millennials (25-34) spend the most, and younger consumers are putting their online shopping skills to good use to purchase their moms the perfect gift."

Any increase in spending should benefit struggling retailers, restaurants, and service businesses. NRF does not break down how much money is spent online versus in brick-and-mortar retailers, but jewelry, clothing, cards, and experience-based gifts lend themselves to in-store purchases; the study reflects that on a percentage basis.

The most shoppers (35%) plan  to get their gifts at department stores while 31%  "will shop at specialty stores such as florists, jewelers or electronics stores." Meanwhile, "24% plan to shop at a local small business," according to the press release. Just under a third of consumers (30%) plan to shop online, an increase from 27% in 2016, while 34% of smartphone owners plan to use their phones for research and 19% plan to make a purchase on them.

That shows that while overall spending on the internet has grown, Americans are still willing to buy certain things in stores. It also suggests that Americans are generally confident enough to spend more than ever before on a holiday where for many of us a homemade gift once was sufficient.