Please ensure Javascript is enabled for purposes of website accessibility
Log In Help Join The Motley Fool
Free Article Join Over 1 Million Premium Members And Get More In-Depth Stock Guidance and Research
By Travis Hoium – May 13, 2017 at 8:37AM

The solar roof is now on sale, and it may wow or disappoint you depending on what you were looking for.

Tesla (TSLA -1.10%) finally announced solar roof sales on Wednesday, bringing the solar product the Elon Musk has been touting a little closer to the market. Reactions from observers ranged from shock over how costly it was to shock over how cheap it was. And depending on what you were looking for, either reaction is understandable.

We still don't have all of the details about the roof, like technical specs, or how it will integrate with a regular roof, but here's what we know so far. 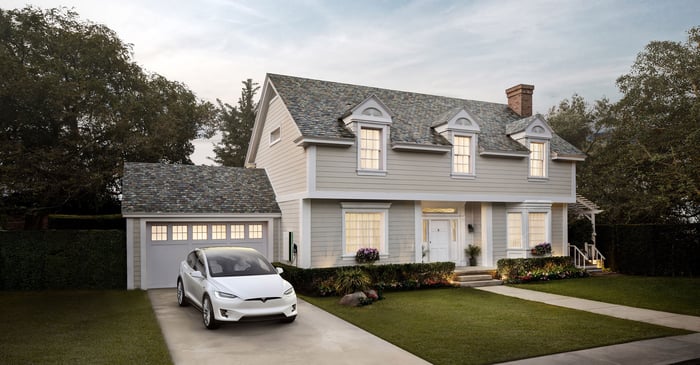 How much it costs

Cost has always been a big question mark for the solar roof. Elon Musk has said it would be a similar cost to a "normal" roof, but never really defined what he meant by that. The number everyone is quoting is the $21.85 per square foot pointed out in Tesla's blog post. But that cost was based on 35% of tiles being solar and 65% being non-solar tiles.

In quotes, Tesla projects solar energy production and the value of that energy over the next 30 years as part of its value. But make no mistake, the cost of installing the actual solar roof before the cost of energy will be much higher than a "normal" roof as most people would define it. And it'll be more costly than even the most expensive tile or slate options currently on the market.

Even if the solar roof isn't cheaper than other roofing options, it is still a viable option for some consumers. But it's not a simple retrofit or repair job, like replacing asphalt shingles or tiles. It's more of a complete roof product, which will make it better for new home construction than repairs. It'll be interesting to see how much success Tesla has selling into different markets given that a bill of $30,000 to $60,000 for a roof repair is out of reach for most people.

It's also not the cheapest way to go solar. Solar panels are now less than $3 per watt to install, and payback times are now as little as 7-10 years, compared to 20-30 years for the solar roof. But aesthetics and the "cool" factor will probably be a bigger initial selling point for solar roof customers than strict economics. 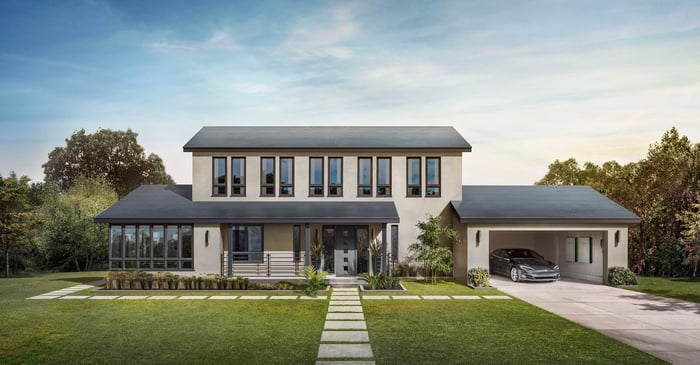 Musk has said that the solar roof will be available everywhere soon, but it could be some time before that happens. First, the product will be rolled out in California, where Tesla has SolarCity's network of installers to help do installations.

Form there, it's unclear how the channel will work. Someone needs to get permits and install the solar roof, including demolition of the old roof, and that includes both mechanical and electrical work that would normally fall to different contractors. Presumably, Tesla will work with local contractors to do that work, but it's uncertain how that will roll out because Tesla doesn't have a natural network of contractors it deals with. And I don't think it'll be easy for a contractor to take on just one solar roof customer, which would involve learning how to do the installation and training workers on a new product that includes both mechanical and electrical installation. Tesla doesn't have the network it needs for national or global installations today, so eventually, it will need to build out that channel. And it's not clear what the strategy will be beyond California.

There are still questions to be answered

Right now, Tesla will essentially custom-design every solar roof, and it's unclear how that process will go. The quotes customers can get on Tesla's website today are preliminary, and it's not clear if Tesla will have to reconfigure many roofs to make the solar roof work. Remember that the homes with the solar roofs on them at Tesla's demo last fall had their roofs entirely rebuilt, which may be required in most cases given the unforgivable nature of glass tiles.

People I've talked to in the industry are also worried about cooling, something Telsa must have thought of but didn't spend any time discussing. Solar cells get hot when collecting solar energy, and the electricity running through cells and their connections to an inverter will need to be cooled in some way so fires don't break out in the roof.

It's also unclear if Tesla can make any money on this high-profile product. $60,000 for a roof is expensive, but Tesla's manufacturing will be costly, demoing a roof is expensive, and if each project needs specific engineering, it's going to cost a lot to get the product off the ground.

The solar roof is moving closer to market, and we're starting to get some needed answers. But investors should be wary of expecting too much from this new product. Tesla is making a product that will likely only be attractive to a small subset of the market, and it doesn't yet have a clear strategy for growing it profitably beyond California. For now, it's likely to be a niche product for Tesla, despite how revolutionary it seems.