Please ensure Javascript is enabled for purposes of website accessibility
Log In Help Join The Motley Fool
Free Article Join Over 1 Million Premium Members And Get More In-Depth Stock Guidance and Research
By Todd Campbell – May 14, 2017 at 6:42AM

Pro-pot advocates have enjoyed a tidal wave of support among voters in the United States and Canada, and as laws approving the use of medical marijuana and recreational marijuana have become common, shares in top marijuana stocks shot considerably higher in 2016. 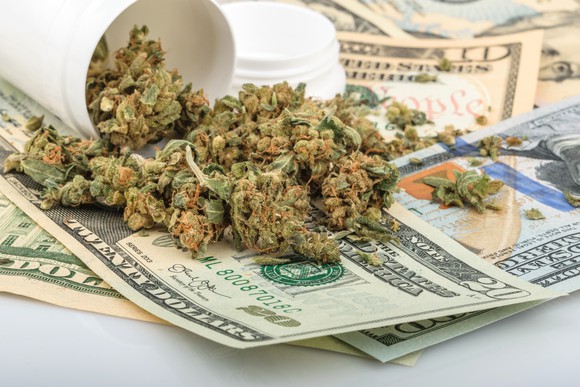 For example, Scotts Miracle-Gro -- best known for its fertilizer products -- has been making a big push into hydroponics so that it can ride the wave of rising demand from marijuana grow facilities. As a result, Scotts Miracle-Gro shares increased 52% in 2016.

GW Pharmaceuticals has invested big money researching marijuana cannabinoids use as medicine since the 1990s. Last year, it reported positive results from trials evaluating a drug based on the marijuana cannabinoid CBD. In these trials, epilepsy patients were given the company's purified CBD drug, Epidiolex, and they saw 40% fewer seizures per month following treatment. Excitement over these results, plus optimism Epidiolex could receive a speedy FDA thumbs-up, caused GW Pharma's shares to surge 61% in 2016.

Marijuana legalization still has significant momentum, but investors in these marijuana stocks appear to have priced in a lot of the near-term sales growth for these companies.

In April, Scott's Miracle-Gro updated investors on the progress its making serving the hydroponic market, and while sales of those products continue to grow, weakness in other parts of its business offset that growth. Hydroponics revenue grew 22% year over year last quarter, and sales are up 13% year to date, but weak sales of the company's other products caused overall revenue to fall 3% from a year ago in the quarter. Unsurprisingly, that news didn't ignite shareholder optimism, and year to date, Scotts Miracle-Gro's stock is down 5.3%.

GW Pharma also updated investors on its first-quarter progress recently. However, since the company is still preparing its FDA filing for Epidiolex, there was little new news reported that could send shares to new highs. As a result, investors remain in watchful-waiting mode ahead of an eventual FDA decision, and its shares have fallen by more than 5% this year.

Investors have also lost some of their appetite for Canopy Growth's stock this year. The company's recent quarterly performance shows its continuing to win customers and grow revenue, but shares have taken a hit following industry recalls tied to the use of banned pesticides. Canadian regulators have since announced a shift to mandatory testing for pesticides, but the overhang has still contributed to a 16.4% decline in Canopy Growth's shares in 2017.

Undeniably, this market is growing very quickly, but it still faces hurdles. For instance, Donald Trump's election as U.S. president has sent shock waves through the industry because his past comments haven't been overly supportive of marijuana legalization. Those worries increased further when Trump picked marijuana foe Jeff Sessions to be his attorney general.

Overall, risks from marijuana-industry growth pains suggest all but the most risk-tolerant investors ought to concentrate on other investment ideas, at least until this industry matures a bit more.