Virtual reality could prove to be the next growth driver for the PC market and for Intel (NASDAQ:INTC). TechNavio estimates that PCs accounted for 43% of the VR content market in 2015, valued at roughly $95 million in 2015 and estimated to grow at a compound annual growth rate of 127% by 2020.

This could be a big deal for the industry, but in order to create more VR content, PCs will need better hardware.

This is where Intel comes in with its eighth-generation central processing units (CPUs), though it's not the only one eyeing this opportunity. Rival Advanced Micro Devices (NASDAQ:AMD) is also pulling out all stops to capitalize on the VR boom.

Intel recently threw some light on its upcoming eighth-generation processors, which are expected to be launched later in the year. The company expects the new processors to deliver performance gains of at least 15% over the previous generation.

Fellow Fool contributor Ashraf Eassa tweeted in Febuary that he had confirmed with Intel that the eighth-generation CPU will be based on the 14-nanometer fabrication technology, as compared with the rumored 10nm technology. But, will a 15% bump in performance be enough to satisfy the needs of the power-hungry workstations that create VR content?

It's still early days and PCs don't need a huge amount of power to create VR content. In fact, Intel has already launched more powerful versions of its i7 processors that are tailored to address VR content creation. In May last year it launched an Extreme Edition Core i7 Broadwell-E processor to target VR content-creation professionals based on the 14nm process. Intel claimed at that time that this chip was 35% faster at 3D rendering for ultra-high-definition (commonly known as 4K) videos as compared with the previous generation chip.

This gives Intel a leg up in this market as VR content requires video rendering in at least 4K resolution in most cases as the video is stretched 180 degrees vertically and 360 degrees horizontally to provide an immersive experience. A lower resolution doesn't provide a good VR experience because it leads to video pixelization.

Not surprisingly, Intel's chips are rated highly when it comes to building high-end PCs for video rendering given the already powerful processors that it has on the market. Therefore, a power bump in Intel's next-gen CPUs should help it extend its lead in this market, though one of its rivals is trying to catching up with its offerings. 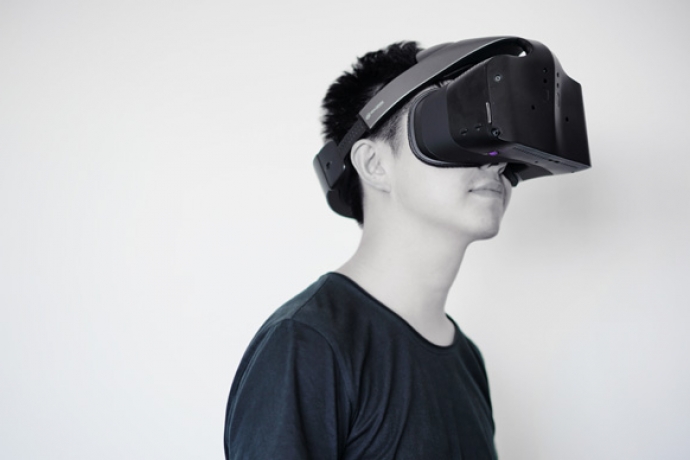 AMD intends to leapfrog Intel in terms of performance with its Ryzen architecture that was unveiled at the Las Vegas Consumer Electronics Show in January. A Forbes article indicates that AMD's Ryzen 5 1600X CPU is reportedly performing better than the Intel Core i7-6850K in a benchmark test, while consuming less power.

More importantly, the Core i7-6850K sells for around $610, while AMD's Ryzen 5 1600X is expected to sell for just $259. AMD could give Intel trouble by offering a better performance at a lower price.

The launch of Intel's seventh-gen i7-7700K processor should tilt the balance in its favor, though, as it will sell for $350 at most and could trump AMD's offering in some areas. The Intel processor, for instance, will reportedly consume 91 watts of power, as compared with Ryzen's estimated 95 watts. It also has a higher maximum turbo frequency of up to 4.5 GHz, compared with Ryzen 5 1600X's 3.7GHz, which gives Intel the upper hand in the key single-thread benchmark test.

A higher turbo frequency means that users can "overclock" the processor. In simpler terms, content creators can extract more power out of the processor by bumping up the power to the specified limit in case they need more juice. Evidently, Intel's chip can achieve a higher speed as compared to AMD's Ryzen, making it the CPU of choice for high-end systems in search of more power, possibly translating into more sales.

Therefore, when Intel releases its next-gen processors later this year, it can get into a stronger position as compared with AMD's Ryzen. So the incremental improvements in Intel's processors could help it stay ahead of AMD in performance terms and help it gain a stronger foothold in the VR PC hardware market.