Procter & Gamble (NYSE:PG) controls one of the biggest portfolios of consumer product franchises in the world. Its brands span core industry segments like grooming, baby care, and household cleaning -- covering products that millions of consumers use every day.

Below, we'll take a closer look at where most of this blue-chip giant's profits come from. 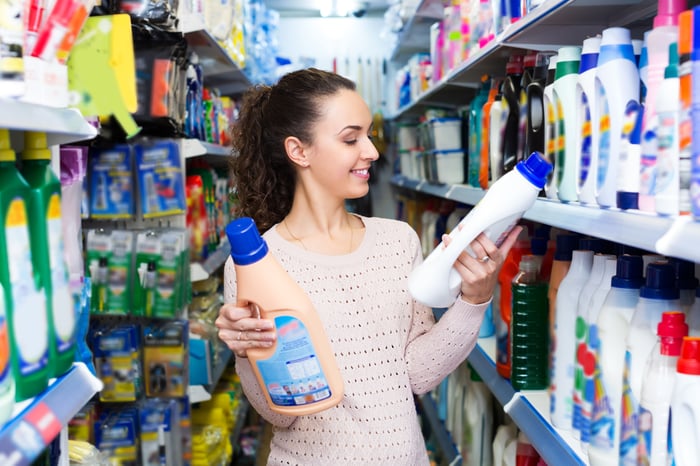 Fabric care is its single biggest division, responsible for just under one-third of sales and 27% of profits last year. Thanks to the Tide, Ariel, and Downy brands, the company is the global market share leader in laundry, with 30% of the industry under its thumb.

P&G also dominates the grooming segment, where its Gillette franchise delivers an incredible 65% of the global market for razors and blades. That's down from 70% a few years ago, though, thanks to rising competition from value-based brands and online subscription services.

Pampers is P&G's single biggest brand. The diaper franchise was worth $9 billion, or 14%, of revenue last year and is the category leader in the U.S. market. Rival Kimberly-Clark (NYSE:KMB) sits in second place with the Huggies brand.

Procter & Gamble has operations in 70 countries and its products are sold in over 180 countries and territories. Yet most of its revenue -- 44%, to be exact -- is generated in the United States. That proportion is growing, too. In fiscal 2014, the figure stood at 39%.

The heavy reliance on developed economies helps keep P&G more profitable, but also slower-growing, than peers. Unilever (NYSE:UL) gets 60% of its business from emerging markets in places like Latin America and Southeast Asia. It enjoyed 4% organic sales gains last year, compared to P&G's 1% uptick. Procter & Gamble's 21% operating margin is well ahead of Unilever's 15%, and Kimberly-Clark's 18%. 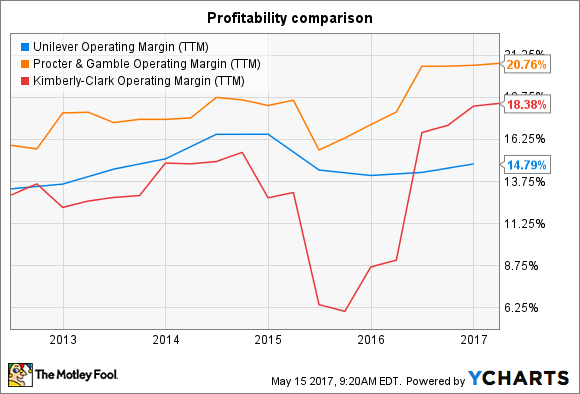 Like its rivals, P&G's global business exposes it to currency swings and to economic disruptions outside of the U.S. In fiscal 2016, for example, exchange rate swings lopped 6 percentage points off reported sales. In the prior year, the company had to take a nearly $2 billion hit in its profits from exiting the Venezuelan market amid economic turmoil.

P&G gets 15% of its revenue, or about $10 billion, from Wal-Mart (NYSE:WMT). That's slightly more than Kimberly-Clark, which counted 14% of its business from the world's biggest retailer last year.

The relationship between P&G and Wal-Mart has grown more complicated lately. In response to declining customer traffic, the retailing giant made three strategic changes that have pinched P&G's top and bottom lines. First, it has whittled down its selection of brands on display in a bid to create a more streamlined, cleaner shopping experience for customers. That's left less room on shelves for P&G to show off improvements in its core brands. Wal-Mart has also pressured its partner to lower prices so that it can better compete against rival supermarket chains. And third, the retailer is pouring resources into in-store brands that in some cases directly challenge P&G's dominance in categories like laundry, home care, and paper goods.

The changes appear to be working, as they've helped deliver increasing customer traffic for Wal-Mart over the past year. For P&G, though, they've added urgency to its e-commerce initiative. Last quarter's 30% spike in that channel was a bright spot in an overall weak report. But the gain still left the digital segment at 5% of P&G's overall business. That number will need to rise significantly over the next few years for the company to maintain market share as customers do more of their shopping online.