Analyst Ming-Chi Kuo with KGI Securities is reporting (by way of MacRumors) that Apple (NASDAQ:AAPL) could announce the oft-rumored 10.5-inch iPad Pro at the June 5-9 World Wide Developers Conference.

The analyst reportedly said that there's a "greater than 70% chance" the new iPad Pro will be announced at the event. 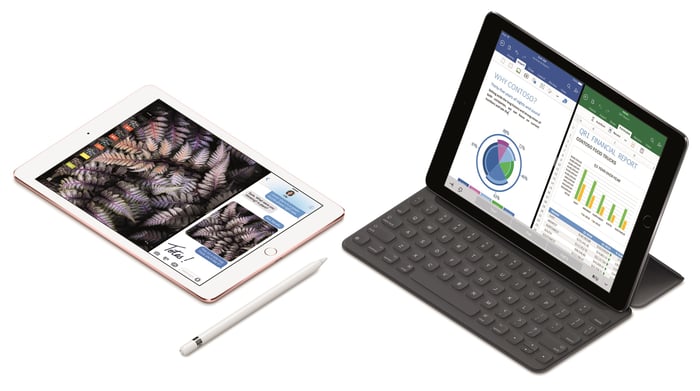 This new iPad Pro, Kuo said, will "have a similar form factor to the [9.7-inch] model but will feature a larger display thanks to narrow bezels." He also argues that the new device "should improve the user experience and help gain traction in the corporate/commercial sectors."

Here's what this could mean for Apple's business.

Last quarter, Apple reported yet another set of dismal results for its iPad business. iPad unit shipments were down 13% year over year, with iPad revenue contracting 12% during the quarter, implying a small boost to iPad average selling prices, probably because of a richer product mix.

What's interesting to note, however, is that Apple CFO Luca Maestri did say the company was "pleased to see iPad growth in the U.S. during the March quarter and revenue growth worldwide for our 9.7-inch and larger iPads over the last four quarters."

This suggests, then, that a drop-off in iPad Mini sales is the key driver of Apple's poor iPad sales, rather than, say, customer rejection of the company's entire iPad lineup.

To help give its overall iPad sales a boost given the apparent structural headwinds associated with the iPad Mini, it makes sense for Apple to keep its large iPad lineup fresh.

Apple began the process when it released a low-cost 9.7-inch iPad with updated internals a couple of months ago, but the company's higher-end iPad Pro models, both the 9.7-inch and 12.9-inch, are quite stale, as each is over a year old as of this writing.

Will iPad ever return to growth?

If the long-term trend in the iPad is that sales of the iPad Mini are on the decline while sales of larger-screen models are on the upswing, then at some point it'd be reasonable to expect the iPad business to return to growth.

But that growth can only return in this scenario once Apple's iPad Mini shipments bottom out, either at some low figure or within a rounding error of zero.

I suspect that Apple's long-term plan is to outright kill the iPad Mini. Notice how, when Apple launched the low-cost 9.7-inch iPad models, the company "updated" its iPad Mini line by simply removing all configurations besides the iPad Mini 4 with 128GB of storage?

And to further degrade the value proposition of the iPad Mini 4, the low-cost 9.7-inch iPad with 128GB of storage sells for $429 -- just $30 more than the iPad Mini 4 with comparable storage space.

Apple introduced the iPad Mini 4 all the way back in September 2015, almost two years ago. If Apple doesn't offer a substantial upgrade to its iPad Mini lineup by the end of this year, I think it'll be reasonably safe to conclude that the product category will be more or less dead.