The effect of a traumatic event can last for quite some time. Witness the relative underperformance of American Express (NYSE:AXP) stock since it announced that it lost a sweet exclusivity deal with Costco Wholesale (NASDAQ:COST). 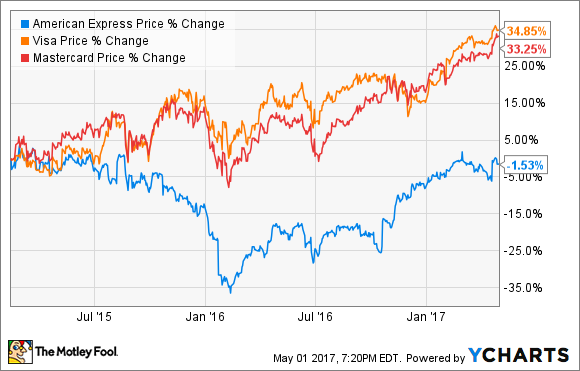 To no one's surprise, AmEx's stock has since been a laggard compared with its monster credit card rivals Visa (NYSE:V) and MasterCard (NYSE:MA). But the company's prospects are quite good, and its future looks solid. Here's why.

There's no sugar-coating that the Costco divorce was certainly a bitter and expensive one for AmEx. At a stroke, AmEx lost one of the best retailer-credit card issuer arrangements in history.

That's why expectations for the company have been relatively muted of late. For its recently reported Q1 2017, the average analyst estimate for per-share earnings was $1.28 -- underneath the expected $1.35 in the same quarter one year previously. Anticipations for revenue were also comparatively modest, at $7.74 billion compared with the $8 billion expected in Q1 2016. 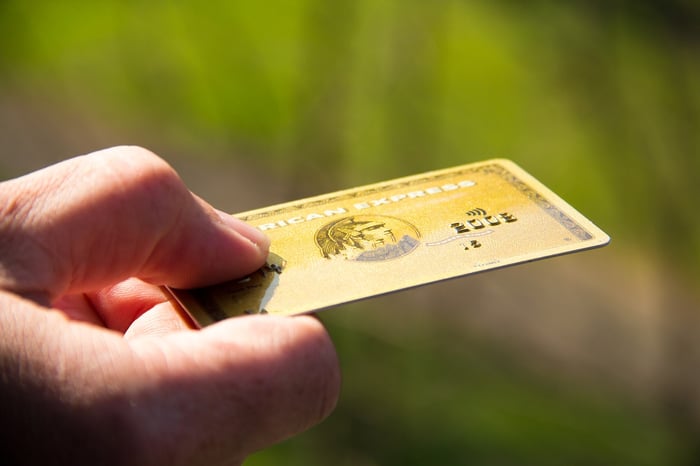 The higher 2016 projections were due, of course, to Costco. At this time last year, AmEx was a few weeks shy of losing its exalted position as the exclusive credit card accepted at the retailer's registers, and as the co-branding partner of the Costco credit card. When Costco made the switch (to Visa as the exclusive card brand, and Citigroup as the co-branding issuer), both line items slumped.

But not as much as some believed they would. For Q1 2017, AmEx handily beat on both figures, delivering EPS of $1.34 (shaking out to a total profit of $1.2 billion) and a top line of $7.89 billion. Stripping Costco-related monies out of the equation, the top line rose by 7% during the quarter.

That's because several critical metrics for AmEx are heading north. One of these is the company's amount of total loans outstanding, which increased a robust 11% on a year-over-year basis. Another is basic card member spending, which rose 8% when adjusted for the Costco abandonment.

AmEx's recent performance isn't as splashy as that of Visa and MasterCard, neither of which has had a Costco-sized partner bail on them. In its most recently reported quarter, Visa managed to lift its net operating revenue by a meaty 23%, to nearly $4.48 billion, and its adjusted net income by 21% to almost $2.07 billion. MasterCard's numbers also rose impressively. Both companies beat top- and bottom-line expectations.

Deservedly, the share prices of both have risen nicely so far this year, with Visa stock advancing by almost 19%, and MasterCard rising 14%. AmEx, meanwhile, is trudging behind at 5%.

This popularity, though, has made Visa and MasterCard stock expensive as far as several key valuations are concerned. Both trade at forward P/Es of over 23, while AmEx's ratio is a much cheaper 12.4. The latter is also considerably less expensive on a price-to-book basis, coming in at 3.3 compared with Visa's 8.5 and MasterCard's 22.5. This discrepancy should support the "buy quality at a discount" argument for AmEx shares.

Also, the "don't leave home without it" company has the more generous dividend by far. Its payout currently yields 1.6%, exceeding the somewhat token dividends of its competitors -- at the moment, Visa is miserly at 0.7%, and MasterCard's yield is similarly thin at 0.8%.

Although American Express hasn't been the market's darling out of the three companies, investors are coming back to its shares. For the most part, the stock has risen slowly but steadily since Costco made the switch to Visa/Citigroup in June 2016.

EPS beats tend to have that effect -- AmEx has trumped estimates in three of its past four quarters -- but I think that's not the only story.

Very encouragingly, the Q1 revenue and earnings beats come in the face of ever-stronger competition in the company's wheelhouse of high-end cards. To fight the competition, AmEx has boosted rewards for its cardholders, yet even with that higher spend it's managing to improve its business.

So while some investors might consider AmEx to be The Company That Lost Costco and Won't Get Over It, the card giant is posting gains in the core areas where it really counts. Nobody expected the Costco recovery would be quick or easy, but it's clearly well in force. AmEx's improvements aren't flukes, and the company should continue to do well. Let's not fret about its future.