Earlier this year, Enbridge (NYSE:ENB) completed its $28 billion merger with Spectra Energy to create North America's largest energy infrastructure enterprise. This quarter, we got to see what the merger meant for Enbridge's income statement. As you might expect, the results were a tad messy thanks to transaction-related costs and certain timing issues.

Here's a look at the pipeline giant's most recent earnings report and what investors should be looking for in the coming quarters as Enbridge completes the rest of its transaction-related restructuring. 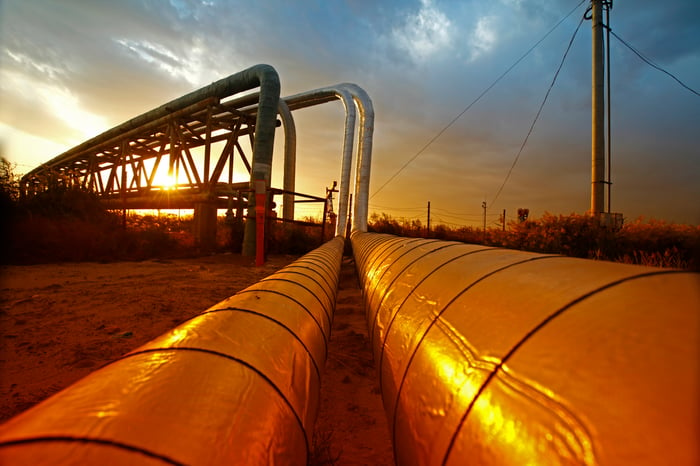 With Spectra Energy's assets now under Enbridge's roof, the company's quarterly earnings release is a long read. The distilled version of the report is that revenue and available cash from operations increased thanks to the inclusion of Spectra's assets even though there were some headwinds. The biggest impacts were warmer-than-normal winter that reduced natural gas distribution demand and some foreign currency effects. Management also noted that the timing of the Spectra Energy acquisition was critical to results as the first two months of the year are when its gas distribution business generates the bulk of its earnings for the year.

The other notable difference between this quarter and the prior year's results is the near-50% decline in earnings. Much of that drop was attributed to changes in realized and unrealized derivative fair value gains and costs related to the Spectra Energy transaction and the subsequent restructuring. Most of these charges are supposed to be one-time occurrences, but management has said that it expects to fully realize the 540 million Canadian dollars in merger-related cost synergies by 2019. Therefore, we should probably expect transaction and restructuring costs to continue for some time. 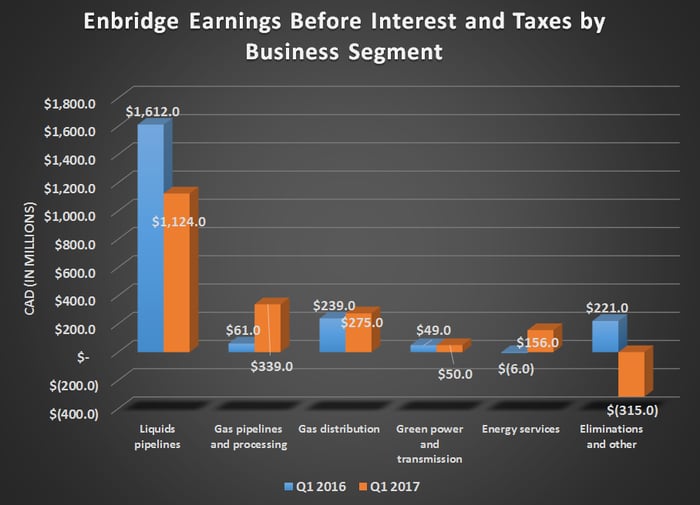 This most recent quarter was a busy three-month period for the company as it completed its merger with Spectra Energy. In addition to this megamerger, here are sone of the other moves management made in the first quarter.

CEO Al Monaco commented on Enbridge's most recent dividend increase and how it showed that the merger with Spectra Energy gives the company a more stable financial foundation.

Our confidence in providing a 15% dividend per share increase this year reflects the strength and stability of our base assets and a very positive longer term outlook for the combined business. Over the longer term, we expect that the strength and diversity of our existing asset base together with six strong growth platforms will enable Enbridge to deliver dividend growth in the range of 10% to 12% per annum through 2024.

While we got our first peek at Enbridge's results now that it has brought Spectra Energy into the fold, it's hard to make an apples-to-apples comparison since there are so many one-time charges and restructuring costs related to the merger on the income statement. It will be much easier to take the pulse of this company after another quarter or two of comparable results.

It will be worth watching in the coming quarters how parent company Enbridge will be able to maintain its promise to grow distributions by 10%-12% annually for the next seven years after cutting the distribution at Enbridge Energy Partners. It appears management thinks it can offset the contribution from Enbridge Energy Partners through its wholly owned assets and distribution growth from its other three subsidiary partnerships. There are certainly enough new projects coming on line this year. Longer term, though, it still has another CA$15 billion in projects to fund by 2019, with an additional CA$48 billion under review.

Management has quite the balancing act ahead of it to maintain strong distribution growth while meeting all the funding needs for this massive growth portfolio.