Disney's media networks division has been a drag on profits. Is it time for a change?

It's no secret that hundreds of thousands of people are cutting the cable cord. The impact of cord-cutters is being felt by dozens of companies, but one that's getting hit particularly hard is Disney (DIS -2.21%). While the company's movie studios, theme parks, and consumer products divisions continue to do well, media networks has languished as it loses more and more subscribers.

ESPN in particular is losing tons of subscribers while its programming costs skyrocket. It's lost 9 million subscribers since 2013, and ESPN has the largest content budget of any television network or SVOD service. Last winter, rumors swirled that Disney could spin off ESPN, which would completely change Disney's media networks division, but is it what's best for the company? 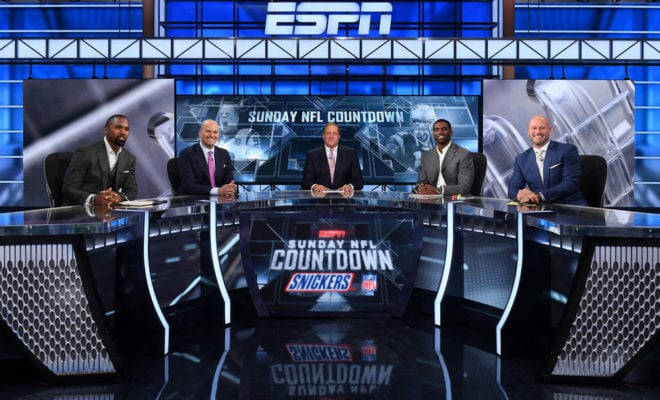 ESPN is the cause of media networks' decline

Disney isn't hiding the fact that ESPN's subscriber losses are to blame for the struggles of its media networks division. In its second-quarter earnings report, it explicitly noted "the decrease in operating income was due to a decrease at ESPN." What's more, Disney's other networks like Disney Channel and Freeform are seeing improvements in operating income despite the industry headwinds.

ESPN has contractual affiliate fee increases with its distributors, which ramp up its price per subscriber every year, but it's losing subscribers faster than its rate increases. Additionally, the subscriber losses are leading to net declines in ad revenue. Disney said it saw a 5% increase in ESPN ad revenue during the second quarter. But if you adjust for the three extra college football playoff games it aired last quarter compared to last year, it saw a decline of 1% year over year.

On top of declining revenue, ESPN is also seeing its programming costs increase. Live sports rights have grown increasingly expensive as networks look for can't-miss programming like Monday Night Football or the NBA Finals. ESPN is getting hit from both sides as it sees lower revenue and higher programming costs.

But the worst may be over soon for ESPN

While cord-cutting isn't slowing down, ESPN's decline in operating profits may soon come to an end. First of all, ESPN's latest programming cost increase stems from its new deal with the NBA. That's the final major sports league renewal for ESPN until 2021. As such, ESPN's programming costs should stabilize starting next year.

Second of all, cord-cutting hit ESPN harder than many other networks. CEO Bob Iger has aggressively pursued deals to get ESPN into the lowest-priced tiers at many distributors, including the new over-the-top digital distributors. These efforts should slow the subscriber bleeding while rate increases help offset the remaining losses.

Finally, ESPN will start experimenting with a direct-to-consumer subscription product later this year. The new over-the-top service will stream content ESPN doesn't have the airtime for on its television networks. The move could help ESPN get more revenue out of its huge content budget.

Still, these trends don't preclude ESPN from remaining a drag on its operating income growth. ESPN is the biggest piece of its biggest segment, so if it's simply treading water, it masks growth in other segments -- even other media networks.

Additionally, Disney is looking for a successor to Bob Iger, and it could have more success if the new CEO didn't have to manage everything from theme parks to the Worldwide Leader in Sports. A smaller, more focused company is easier to understand and keep under control.

Even with ESPN's struggles, it plays a vital role at Disney. It spits off cash every month for Disney to invest however it sees fit. From opening new theme parks to returning capital to shareholders in the form of share buybacks and dividends, ESPN is still one of the biggest sources of cash for the company despite its declining operating income.

If Disney spun off ESPN or otherwise got rid of it, it would be giving up a steady stream of cash to fund the growing parts of its business. So, investors shouldn't expect anything to happen to Disney's media networks division anytime soon.