The most important variable when it comes to bank stocks right now is the federal funds rate, the primary short-term interest rate benchmark in the United States. If the Federal Reserve sticks with its plan to raise interest rates two more times this year, then banks will make a lot more money.

JPMorgan Chase (NYSE:JPM) offers a case in point. The nation's biggest bank by assets recently disclosed that it should earn an added $2.3 billion worth of net interest income (NII) over the 12 months following an instantaneous rise in short- and long-term rates by 100 basis points, or 1 percentage point. This doesn't mean JPMorgan Chase's profit will increase that much, because it won't -- at least not just because of higher interest rates. A bank's net interest income is instead a component of revenue, calculated by subtracting a bank's cost of funds from its interest income from earning assets. To convert it to net income, then, taxes need to be excluded. Either way, $2.3 billion is a lot of money.

With the addition of the March rate hike, we've updated our [net interest income] scenarios as follows. Rates flat from here, so the full year NII would be up around $4 billion. Based on the implied, NII would be up by around $4.5 billion. And of course, the Fed dots would imply the possibility of three rate hikes this year, which is not fully priced in. So expect second-quarter NII to be up sequentially, approximately $400 million, consistent with what we saw this quarter.

The increase that JPMorgan Chase is already seeing traces back to the Fed's decision to raise the fed funds rate in December and March, for a total of 50 basis points. Moreover, as Lake pointed out, the Fed's dot plot shows that the central bank is inclined to raise rates two more times this year, though both would be captured by JPMorgan Chase's projection for a 100-basis-point increase going forward. 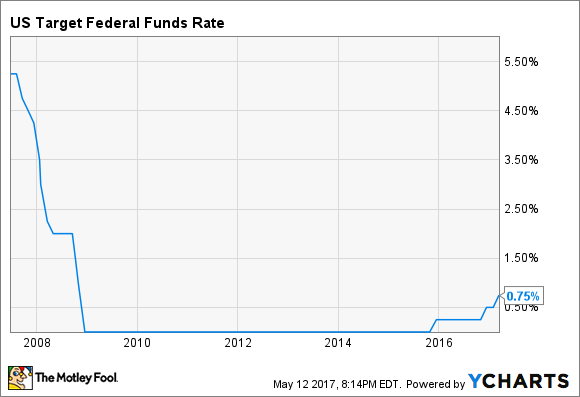 The net result is that investors who have an interest in bank stocks, and JPMorgan Chase in particular, would be smart to listen closely when the Fed speaks. There's no guarantee that the central bank will raise rates further this year, but it would be great news for shareholders of JPMorgan Chase if it did.