While the midstream general partner is up almost 50% over the past year, its upward momentum seems to have stalled lately despite significant improvements at its two MLPs.

To say that Energy Transfer Equity (ET) has taken investors on a roller-coaster ride over the past few years would be an understatement. From late 2015 through early last year, the energy infrastructure company's stock plunged nearly 90% due to worries that it would sink under the weight of debt if it completed a planned merger with Williams Companies (WMB -0.40%). However, with the energy market improving and the deal with Williams Companies falling apart, shares of Energy Transfer Equity have more than doubled off the bottom.

That said, the stock still has a long road to recovery ahead of it before it gets back to its former peak. 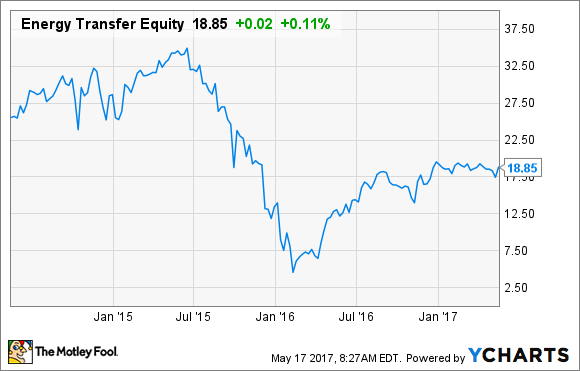 Furthermore, despite that wide gap, the company's stock price seems to be stuck in neutral this year, since it has been roughly flat since the calendar flipped the page to 2017. That stalled recovery comes despite the significant progress of its two master limited partnerships, Energy Transfer Partners (ETP) and Sunoco LP (SUN 0.90%), in shoring up their financial situation. These factors all seem to suggest that the stock might just be taking a breather while investors wait for clear signs that the franchise is turning a corner.

The cornerstone of the franchise is pipeline and processing company Energy Transfer Partners because it supplies Energy Transfer Equity with the bulk of its cash flow. However, that entity has struggled during the oil market downturn due to the impact of lower commodity prices. It also has had some issues completing one of its major expansion projects. Because of these problems, the company's financial metrics had deteriorated. However, it is in the processes of righting the ship after recently completing a transaction to combine with former sibling company Sunoco Logistics Partners.

That said, the first quarter as a combined entity didn't completely wipe out Energy Transfer Partners' legacy issues. Instead, the company's distributable cash flow sank 4.5% due to the impact of lower volumes in both its interstate and intrastate transportation and storage segments. However, those issues masked the fact that it appears poised to turn that sinking cash flow around later this year because it has several major project completions coming down the pipeline. Topping that list is the recent completion of its controversial Bakken Pipeline, which should start generating cash flow in the second quarter. As that pipeline and other new additions begin to reverse the company's sagging cash flow, those improvements should flow right up to the parent company. 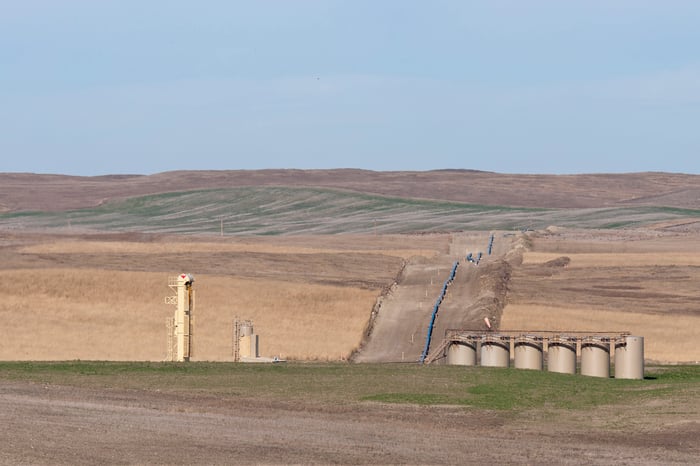 Firming up the financial foundation

Another issue that has been holding back Energy Transfer Equity's continued recovery is the financial problems of its fuel distribution MLP Sunoco LP. Those issues stem from the fact that Sunoco LP's earnings and cash flow plunged last year due to shrinking margins. That deterioration put tremendous pressure on its balance sheet, causing its leverage ratio to spike because it had taken on a massive amount of debt to complete a slew of acquisitions.

Energy Transfer Equity tried to help with the problem earlier this year by injecting $300 million of cash into Sunoco LP via a preferred equity private placement. However, that cash was just a drop in the bucket for a company that had $1 billion drawn on its credit line and another $3.6 billion of other long-term debt. That troubling balance sheet ultimately led Sunoco LP to unload the bulk of its convenience stores in a $3.3 billion deal with 7-Eleven. Not only will that deal give it proceeds to pay down debt but the company signed a 15-year fee-based contract to supply 7-Eleven with 2.2 billion gallons of fuel annually. Meanwhile, the company is also looking for buyers for 200 additional stores that 7-Eleven didn't purchase and had another 100 real estate assets on the market. Once all these strategic transactions close, it should lift a significant weight that had been holding down both Sunoco LP and its parent company.

Energy Transfer Equity's stock has been stuck in neutral this year due to issues at its two MLPs. However, both companies have announced a slew of strategic initiatives over the past few months to shore up their financial situation. As these catalysts start paying dividends, it could be just the fuel that's needed to restart Energy Transfer's stalled stock price.