Real estate investment trusts, or REITs, can be excellent ways to generate income from your stock portfolio while still providing excellent upside potential over the long run. Also, residential REITs can allow you to take advantage of the strong market for rental housing in the United States. There are several different types of residential REITs to choose from, so here are three that could make excellent additions to your stock portfolio in 2017.

Stock prices and dividend yields are current as of May 15, 2017.

Over the past 13 years, the homeownership rate in the U.S. has been steadily declining, and younger generations in particular aren't buying houses at the rate previous generations did. This has left homeownership at a generational low, and has resulted in a highly attractive rental market. 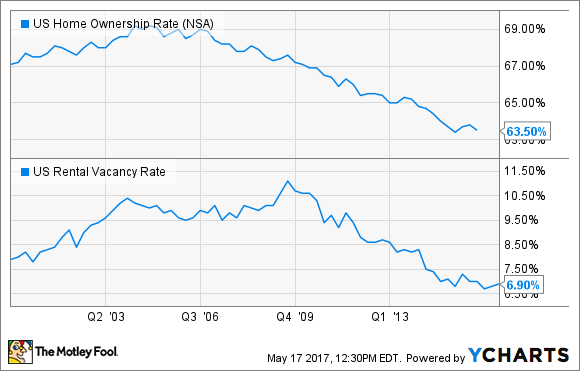 Apartment REIT AvalonBay Communities specializes in properties located in a handful of high-barrier coastal markets, such as New York City, Southern California, and Washington, D.C., where supply is low, rental demand is strong, and construction of new apartment properties is prohibitively expensive for would-be peers. As of March 2017, AvalonBay owned, either in full or in part, 284 apartment communities with more than 82,000 rental units. 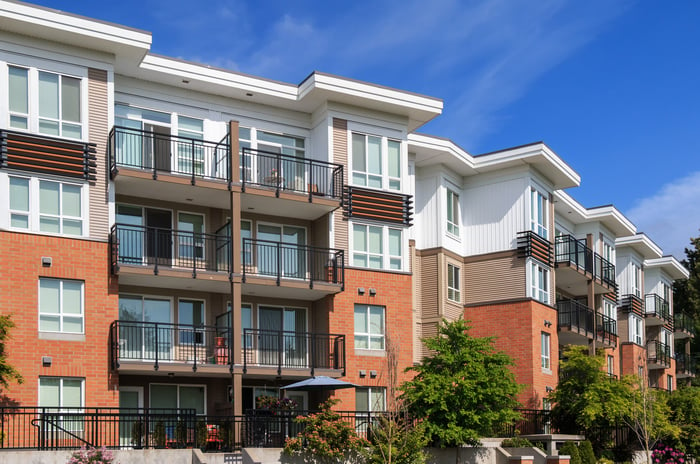 AvalonBay's preferred mechanism of growth is developing new properties from the ground up, and redeveloping (renovating) its existing properties, both of which can be excellent value creators. Think of it like this: Let's say that the average apartment property will produce a 7% annual return on your investment, so a $10 million property would generate $700,000 per year. Well, if you can build the same property from the ground up for just $7 million, you're now producing a 10% return on investment. Plus, you've created $3 million in equity. Of course, this is a simplified example, but this is why development is often more attractive than simply acquiring properties.

Since its 1994 IPO, AvalonBay has outperformed the S&P 500 by a wide margin, and has managed to raise its dividend at an annualized rate of 5.4%. With about two dozen new properties under development and continued strong fundamentals in the rental market, AvalonBay could have more good times ahead.

Like AvalonBay, Mid-America Apartment Communities acquires, develops, and redevelops apartment properties. However, like the name implies, the company focuses on non-urban markets, with a particularly high concentration in the southeastern U.S.

Mid-America owns over 101,000 apartment homes, and while its properties are located throughout the Sunbelt, the company's top three markets are Atlanta, Dallas, and Charlotte. Essentially, the company targets markets with higher-than-average job growth, and properties whose price points appeal to a large portion of the market.

Mid-America has paid 93 consecutive quarterly dividends, and has a fantastic track record of increasing its payout over time. With a relatively low (for a REIT) 67% payout ratio, there should be plenty of room for future dividend increases. Over the past two decades, Mid-America Apartment Communities has averaged total returns of more than 13% per year, handily beating the overall market.

The majority of residential REITs focus on apartment properties, but American Homes 4 Rent is a rare exception. As of the first quarter of 2017, the company owns more than 48,000 single-family homes in 22 U.S. states.

Although it's still a young REIT, the results so far have been promising. FFO per share, the REIT version of earnings, grew by 12.7% on a year-over-year basis, and occupancy rose to 96%. The company also recently received investment-grade (Baa3/BBB-) credit ratings, which should boost its financial flexibility and reduce its borrowing cost going forward.