Tesla (NASDAQ:TSLA) isn't the only company that sees an opportunity in energy storage, and some surprising competitors are now starting to emerge in the market. Sonnen made its way to the U.S. a couple of years ago, bringing experience from thousands of energy storage systems in Germany. Small companies like Sunverge, Adara Power, and Enphase Energy are also trying to figure out their own path to the market.

Quietly, Mercedes-Benz has built its own residential energy storage business and just announced a partnership with Vivint Solar (NYSE:VSLR), one of the top residential solar companies in the U.S. This brings new competition into the market, but may also highlight how Tesla has limited its own opportunity by buying SolarCity. 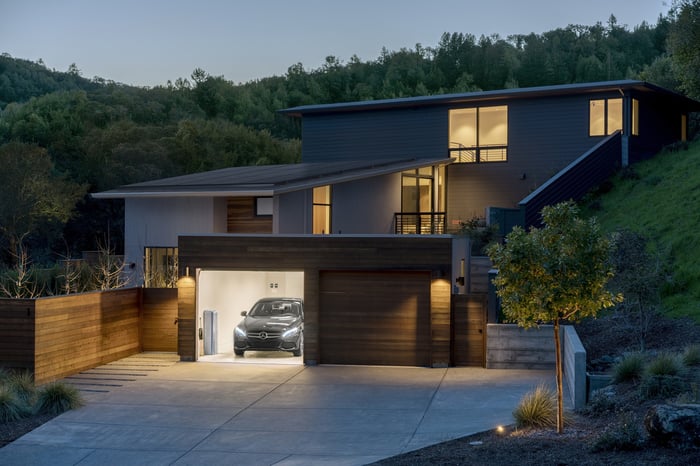 Vivint and Mercedes-Benz's partnership will have Vivint exclusively selling the automaker's energy storage solution in the U.S. Not only will it be used for backup power, but it will also allow for control of energy in places with time-of-use rates for solar customers like California.

The systems are modular with 2.5 kWh batteries that will scale up to 20 kWh. That's much smaller than the 14 kWh Powerwall, but the scalability could be an important factor. Prices weren't given in the initial announcement, but with Powerwall pricing readily available, the two companies will have to be cost competitive to attract customers.

This is an interesting move by Mercedes-Benz, which is also developing a lot of new electric vehicles to compete with Tesla. This could lead to the German automaker taking a more holistic view of energy as it develops its energy storage strategies, similar to what Tesla is creating.

What's notable is that Vivint Solar, Sunrun, and SunPower have all chosen residential energy storage energy partners that aren't named Tesla. Despite being the highest-profile player in residential energy storage, the company has essentially been relegated to selling through the shrinking SolarCity network of solar installations. And you can't blame them for not helping a competitor grow production and learn more about how to make money in energy storage.

Tesla actually put itself in this situation by buying SolarCity. Previously, it just had a loose relationship with the company and Tesla sold storage systems through Sunrun and could have partnered with other installers. But now, Tesla is their competitor so why wouldn't they look elsewhere for a partner? By buying SolarCity, Tesla may have limited its own opportunity in residential energy storage.

The storage wars are here

2017 will be full of energy storage news because battery costs are falling rapidly and the economics of installing a storage system are finally starting to make some sense. Look for every solar installer to have an offering by the end of the year and for pricing to become more transparent as well. Vivint Solar has picked the horse it wants to ride in energy storage and the groundwork is being laid for all of the powerful players to stake their claim to a piece of this growing industry.