Please ensure Javascript is enabled for purposes of website accessibility
Log In Help Join The Motley Fool
Free Article Join Over 1 Million Premium Members And Get More In-Depth Stock Guidance and Research
By Leo Sun - May 21, 2017 at 8:44AM

The chipmaker talks a lot about its growing IoT business, but it still isn’t generating enough cash to become a major pillar of growth.

Intel (INTC -0.80%) CEO Brian Krzanich frequently highlights the Internet of Things (IoT) as a key growth market for the aging chipmaker. But critics are quick to point out that the segment generated just 5% of its revenues and 3% of the company's operating income last quarter -- so it's hardly a pillar of growth for the company.

Revenue at the business rose 11% annually to $721 million during the quarter, fueled by rising demand for its industrial, video, and automotive chips. But operating income fell 15% to $105 million due to higher investments in driverless cars and other technologies. 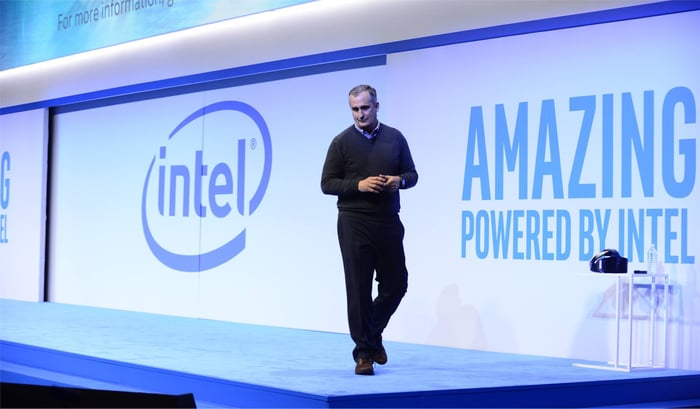 These chips work together with connectivity hardware from other big companies like Cisco, which supplies networking hardware and software for many big companies, and General Electric, which integrates machine-to-machine (M2M) chips and software into its industrial hardware. 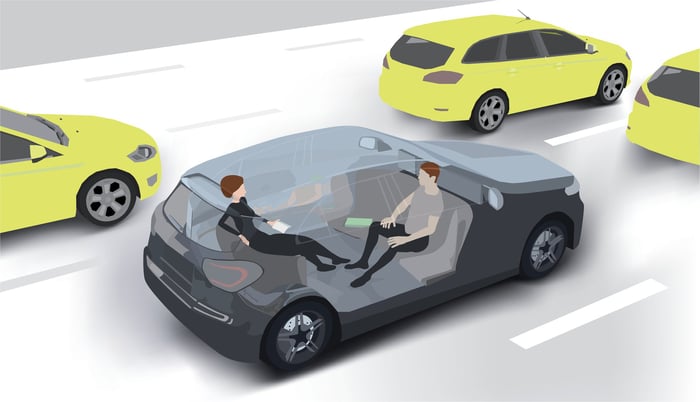 That purchase will help Intel counter NVIDIA (NVDA 1.10%) and Qualcomm (QCOM 0.09%) in the automotive chip market.

NVIDIA already established a first-mover's advantage in the market with its Tegra chips for infotainment and navigation platforms, as well as its Drive PX platforms for autonomous driving. Qualcomm is quickly catching up with its planned takeover of NXP Semiconductors (NXPI 0.23%), which will make it the biggest automotive chipmaker in the world.

A crucial core technology in the driverless vehicle push is computer vision. That's why Intel acquired computer vision start-up Movidius last September. Movidius is the developer of Project Tango, a project from Alphabet's Google that creates virtual overlays of real-world surfaces with depth-sensing cameras -- a concept which is related to Intel's own augmented reality headset, Project Alloy. Buying both Movidius and Mobileye should significantly strengthen Intel's own RealSense depth-sensing cameras.

But computer vision isn't just for autonomous cars. Intel is also using these video solutions for autonomous drones, security cameras, secure PCs, and industrial systems. Merging its RealSense tech with its acquired computer vision technologies and Atom processors could widen Intel's moat against potential rivals like Qualcomm -- which is also expanding into cars, drones, and cameras with low-power processors.

However, reports of layoffs across the wearables division raised red flags late last year. Intel denied that it was stepping back from wearables, but Qualcomm's recent claim that its ARM-based chips were powering over 80% of the world's Android Wear devices raised serious doubts about Intel's future in wearables. Despite those setbacks, Intel is reportedly still moving ahead with updated versions of its Curie module for fitness trackers, smartwatches, and smart apparel.

Should IoT matter to Intel investors?

Brian Krzanich claims that the IoT and Data Center businesses complement each other, since all the data from those connected devices will be protected and analyzed across cloud-based servers -- most of which use Intel chips.

However, IoT devices powered by chips from other chipmakers, like Qualcomm, also deliver the same data to data centers. Therefore, it might be a stretch to call them complementary businesses. Nonetheless, Intel will likely keep investing in IoT technologies, since the chipmaker estimates that the number of connected devices worldwide could surge to 200 billion by 2020.

While Intel's IoT business certainly won't solve its ongoing troubles in the PC and data center markets anytime soon, staying invested in that market will ensure that the chipmaker doesn't miss another major technological shift, as it did with mobile devices about a decade ago. Therefore, investors should keep an eye on this business -- even if it only generates a single-digit percentage of its overall revenues.