Unpredictable current events and political developments make the firearms industry a tough one to stay invested in.

There are only two publicly traded gunmakers in America: American Outdoor Brands (SWBI 0.83%) (formerly known as Smith & Wesson) and Sturm, Ruger & Company (RGR 0.67%). Today, we're examining each company's revenue over the past four years, as well as estimates for 2017.

Gun sales don't consistently rise. Instead, they're influenced by current events and politics. NICS background checks for firearm purchases -- the key gauge of gun demand -- generally rise after mass shootings and Democratic proposals of tougher gun regulations, and fall when Republicans are in power. 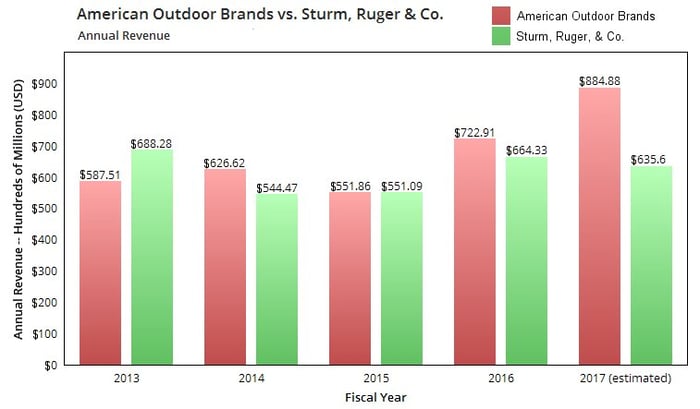 American Outdoor has been diversifying into adjacent markets like laser sights, accessories, and knives to reduce its dependence on firearms. That's why its sales are expected to rise this year, while Sturm, Ruger's revenue -- which depends entirely on guns -- is expected to decline. However, American Outdoor remains more exposed to potential assault weapon bans than Sturm, Ruger, which sells more pistols, single-shot rifles, and shotguns.

NICS background checks have declined annually for five straight months now, so investors should brace for tough year-over-year comparisons over the next few quarters. But neither gunmaker is likely to fade away. Instead, they'll probably continue diversifying their core businesses away from firearms and controversial assault weapons.