How big do you think Russia's economy is? It must be huge, right?

Just look at a map. In terms of landmass, it's almost twice as large as the second-largest country in the world, Canada.

Yet it turns out that Russia's economy is actually quite small. Its gross domestic product (GDP) in 2015 was half the size of California's. 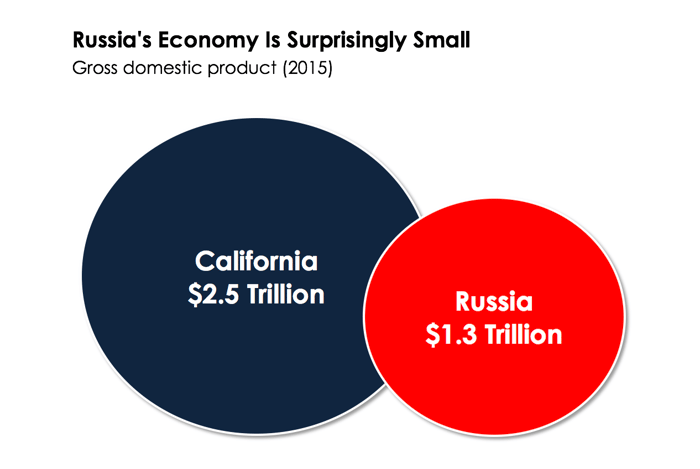 You read that right. When it comes to economic might, Russia doesn't even crack the top 10 in the world.

The main reason is that Russia has a smaller population than its landmass would lead one to believe. It takes the ninth spot in the world, with 142 million people, outranked by the likes of Brazil, Nigeria, Indonesia, and Bangladesh. This matters because the size of an economy is dictated by labor and capital. The more of one or both, with all else being equal, the greater the GDP.

On top of this, the sharp drop in oil prices since 2014 has crippled Russia's economy. Its GDP has dropped 40% since the year before energy prices tanked. To put that in perspective, the U.S. economy dropped a maximum of 26% during the Great Depression.