Well-known tech companies Netflix and Amazon.com are solid picks to extend their winning business models in 2017 and beyond.

In investing, you don't have to reinvent the wheel to enjoy favorable outcomes. In fact, if you simply stick to the plan of buying and holding high-quality companies year in and year out, you'll almost certainly end up with far more money than you started with.

In that vein, the two companies that I'll discuss here as my top growth picks of 2017 are each household names. But they aren't boring companies. Thanks to the competitive strengths of their businesses, Netflix (NFLX -0.27%) and Amazon.com (AMZN -8.43%) are strong contenders to continue their long-standing track records of market-beating returns.

Like Amazon, streaming giant Netflix is happy to sacrifice near-term profitability to maximize its long-term market share. With the company trading at 205 times trailing earnings and 83 times next year's earnings estimate, this approach can be frustrating for investors conditioned to think in terms of present-day valuation. However, with a long-term addressable market of nearly every consumer worldwide, favoring growth over profits is for certain the right move.

Comparing Netflix's U.S. and international businesses proves the point. Although it's still growing, Netflix's U.S. operation is more mature, which can shed some light on what the streaming giant's overall profitability could look like over the long term. Netflix prefers to present its per-segment margin structure by contribution margin, a fairly obscure metric that's calculated by subtracting variable costs from sales. In the U.S., Netflix's contribution margin has tended to hover in the high 30% range, whereas its younger international segment has seen its contribution margin climb from negative 16% in Q1 2016 to 4.1% in its most recent quarter.

The implication is that Netflix's business model becomes profitable when it reaches a certain level of subscribers in a given geography. In 2016 Netflix, expanded to make its service available in over 130 countries. It's available virtually worldwide, outside of China and a handful of other places. Netflix understands that the best strategy to maximize its long-term value involves investing to capture as many members as possible, as the market for streaming subscribers is still up for grabs globally. 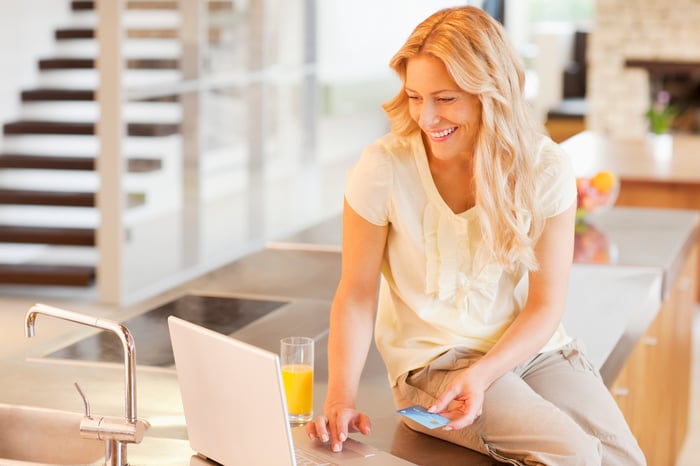 Undisputed e-commerce leader Amazon continues to lead the charge in upending the ways consumers and businesses buy and sell goods around the world. Amazon and its investors have been well compensated for their participation in the business revolution. The stock price, sales, and cash flow from operations have grown at breakneck rates over the company's history. 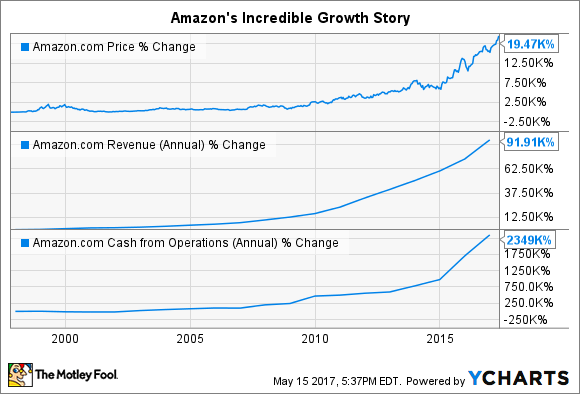 That's the part of the story most investors know. Less familiar is that Amazon's growth is in many ways just getting started. I use three key statistics to frame Amazon's long-term market opportunity:

These figures all involve fair amounts of projection and imprecision, but when compared with Amazon's current financial footprint, the difference is so large that it renders these issues obsolete.

In each of these instances, it isn't clear how large a share of these two markets Amazon could capture, but it seems reasonable to say it's far larger than the company's share today, which is the crux of my belief that Amazon is one of the top growth stocks of 2017 and beyond.