Graphics specialist NVIDIA's (NASDAQ:NVDA) Titan graphics cards are positioned as the company's highest-end gaming graphics processors. NVIDIA also targets them at "prosumer" types. These cards are far from NVIDIA's highest-volume runners, but they carry high average selling prices (the current model, the Titan Xp, sells for $1,200) and are, naturally, very lucrative for the company.

The current Titan Xp launched back in April, offering a modest performance boost over the previous Titan X (2016) card, which itself launched in August 2016. 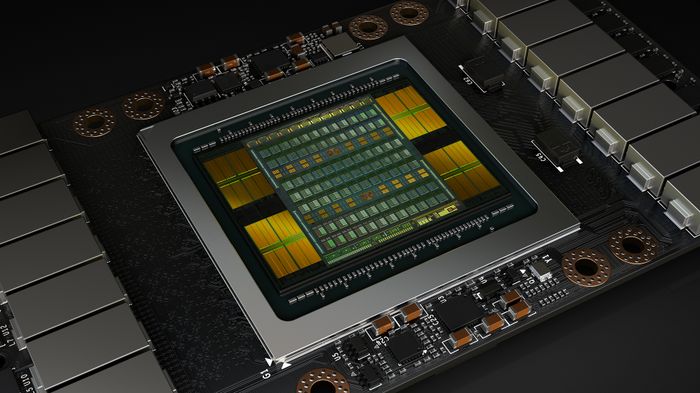 VideoCardz.com, spotting a purported leak that seems to be traceable to a social media post from an NVIDIA intern, reprinted an image that shows a next-generation NVIDIA Titan card. Such a card would surely be based on NVIDIA's recently announced Volta architecture, which is expected to begin shipping in the form of the data center-focused Tesla V100 accelerator in the third quarter of this year.

There's no way to tell if this leak is legitimate, but I don't think NVIDIA will launch a new Titan product soon. Here's why.

Graphics memory maker SK Hynix put out a press release a little while back announcing GDDR6 memory (GDDR stands for "graphics double data rate") running at 16Gbps that it aims to produce "for a client to release high-end graphics card by early 2018."

I'd be willing to bet serious money that this client is NVIDIA and that the "high-end graphics card" in question is a Volta-based Titan product.

So, if that product is coming in "early 2018" (I take this to mean the January to April time frame), then a new Titan is still between seven to 10 months out. In other words, the current Titan Xp should remain NVIDIA's top Titan product for a while yet.

Titan Xp may lose crown before that

Though the current Titan Xp should be NVIDIA's top Titan product for some time to come, it might not be its top graphics processor for as long as it takes for the company to get a new Titan out into the marketplace.

There have been rumors that NVIDIA plans to release its first Volta architecture-based gaming graphics processors later this year. Some reports have suggested the third quarter (which is when the data center-focused Tesla V100 is expected to ship), but I wouldn't be surprised if mass availability of the cards came in the fourth quarter.

The first gaming-focused Volta product is likely to be based on a chip called GV104, the direct successor to the GP104 chip that powers the company's GeForce GTX 1080 and its cut-down counterpart, the GeForce GTX 1070.

I also wouldn't be surprised if the top graphics cards based on GV104 offered better performance in games than the top Titan Xp at what is likely to be a much lower price. This could put the Titan lineup in a sort of limbo until the successor to the GP102 chip that powers the Titan Xp -- likely called GV102 -- makes it to market as a Titan product itself.