Please ensure Javascript is enabled for purposes of website accessibility
Log In Help Join The Motley Fool
Free Article Join Over 1 Million Premium Members And Get More In-Depth Stock Guidance and Research
By Maxx Chatsko - May 23, 2017 at 10:53AM

The oil and gas industry is expected to gradually recover, but will it be enough to pull CARBO Ceramics stock out of its rut?

Proppant manufacturers rode America's shale revolution to incredible heights as abundant stores of sand and ceramic clays mined throughout the United States were put to good use domestically. They played a critical role in boosting American oil production, and CARBO Ceramics (CRR) was one of the leading beneficiaries. Its stock price soared close to $175 per share in 2011.

Unfortunately, shareholders haven't seen anything near that since. The dramatic pullback in oil and gas drilling activity since late 2014 has had dramatic consequences for the proppant industry, as oil producers have sought to corral operating expenses by relying on legacy assets instead of more expensive new projects. The pain has not been distributed evenly, however. While peers U.S. Silica Holdings (SLCA -3.33%) and Hi-Crush Partners (HCRS.Q) began to recover in 2016, CARBO Ceramics continued its decline. Today it trades for just $9 per share -- near a 10-year low.

Does that mean the market is unfairly valuing CARBO Ceramics -- and, if so, is it a buy? 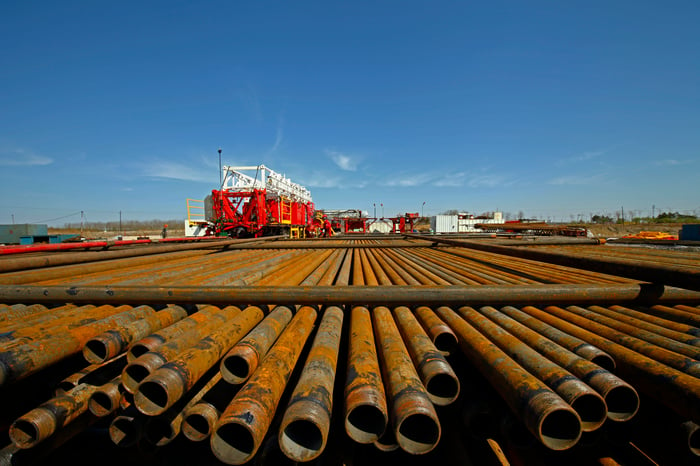 State of the industry

The proppant industry has seen a sharp recovery between the third quarter of 2016 and the first quarter of this year. Hi-Crush Partners, U.S. Silica Holdings, and CARBO Ceramics have grown quarterly revenue 79%, 78%, and 71%, respectively. The three peers achieved roughly the same improvement in quarterly revenue, but the same cannot be said for share prices since mid-2014. 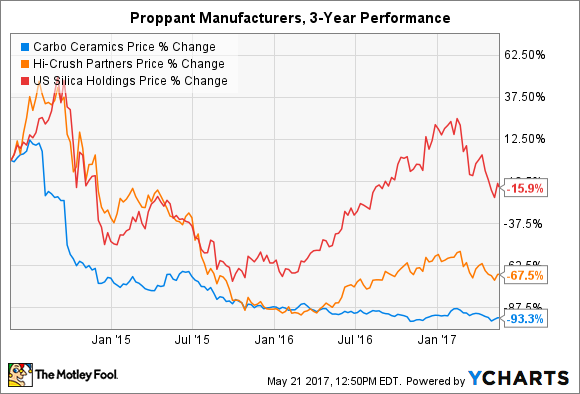 What afforded peers the ability to avoid a meltdown, or at least begin to recover in 2016 from the initial shock to the industry, while CARBO Ceramics lost 93% of its value? It all comes down to the types of proppant products sold by each company.

Both U.S. Silica Holdings and Hi-Crush Partners sell frack sand, which is the least-engineered proppant available for oil producers. That also means frack sand is the lowest-cost proppant on the market for both manufacturers (cost of product) and oil producers (average selling price). There are drawbacks to using frack sand compared to more highly engineered proppants, namely that it withstands the lowest pressure levels inside of a well and that higher volumes are required. But given its low cost and availability, volumes have not been a problem, which has also allowed it to set the benchmark for proppant pricing -- with devastating consequences for CARBO Ceramics.

Why? The company sells highly engineered ceramic proppants. These products cost more to mine, produce (using heated kilns to create uniform microspheres), and purchase, but can be used at much higher well pressures than frack sand. The company claims that its highly engineered proppant brands allow producers to maximize oil recovery from each reservoir, but, judging by recent performance, the value proposition hasn't made sense for most of the drilling industry in recent years.

The different product mix among these three peers may not be news to investors. However, product type has determined gross margin for each producer, which has had the single biggest impact on EPS. Consider the following metrics from the last four quarters.

Given the pricing pressures and the slow pace of the oil recovery thus far, CARBO Ceramics could wallow in unprofitable operations for the foreseeable future. Consider that despite increasing revenue 71% from the third quarter of 2016 to the first quarter of this year, gross profit has barely budged, from a loss of $20.9 million to a loss of $19.5 million. That's in sharp contrast to sequentially improving profitability for its two closest peers.

Is CARBO Ceramics a buy?

Simply put, CARBO Ceramics has a much higher level of fixed operating costs associated with its manufacturing assets for producing highly engineered proppants than do U.S. Silica Holdings or Hi-Crush Partners for churning out low-cost frack sand. That has allowed the latter two to begin heading toward a recovery, while industry activity and pricing dynamics have yet to meet the minimum level of support for CARBO Ceramics to come close to turning a profit. The market is pretty clearly hinting that frack sand will do just fine in the current environment, at the great expense of highly engineered ceramic proppants. With no end to that trend in sight, I would not consider buying CARBO Ceramics at this time.