Shares of CARBO Ceramics (CRR) sold off on Monday and were down more than 10% at 2 p.m. EST. Fueling Monday's sell-off was an analyst downgrade, and the continued downdraft in the wake of the oil and gas proppant maker's fourth-quarter results from last week, which has now pushed its stock down more than 26%.

Last Thursday, CARBO Ceramics reported its results for the fourth quarter and full year. At first glance, they looked good since the results beat expectations on both the top and bottom line. Because of that, the stock initially spiked double-digits on Thursday. However, those gains were quickly given back, and then some, after investors dug into the report. 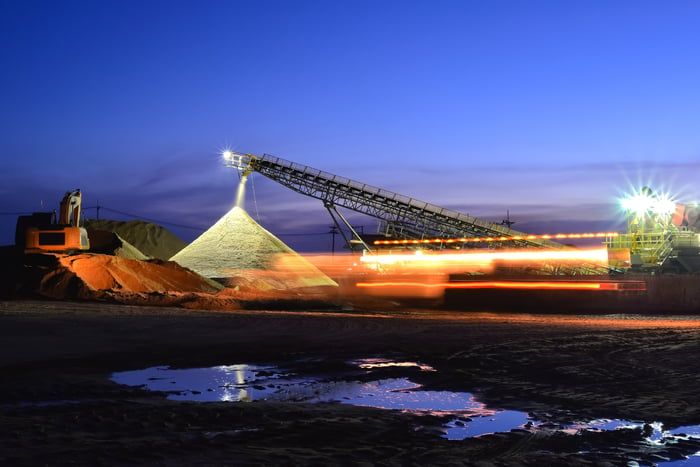 The biggest concern seems to be the company's rather lukewarm outlook. CEO Gary Kolstad said in the earnings release, "If the recent strengthening in oil price continues in 2018, we believe base ceramic demand could improve in 2018." Given that oil prices are up sharply over the past year, that uptick should have already started driving demand for the company's ceramic proppants. However, that doesn't seem to be the case, with the concern being that ceramics might be losing market share to cheaper sand proppants, which are in high demand right now.

That weaker outlook led analysts at Evercore ISI Group to downgrade shares of CARBO Ceramics on Monday from outperform to in line. That downgrade is giving investors another reason to jump ship after earnings and is the main catalyst behind Monday's sell-off.

While CARBO's financial results are getting better and should continue to improve during the first half of this year according to Kolstad, the company isn't back on solid ground just yet. Because of that, shares still aren't worth buying even if they are now much cheaper after its post-earnings sell-off. Instead, investors might want to consider one of the top-tier fracking stocks, since those are in a better position to prosper in the current oil market conditions.