Less than a year and a half ago, Pandora (NYSE:P) bought Ticketfly, an online ticketing company. At the time of the acquisition, Pandora's management believed it was a "game changer," and that it could use its troves of listener data to increase concert ticket sales on the platform.

Things didn't quite work out like that. Pandora is now reportedly looking to sell off Ticketfly even as it continues to look for a buyer of the entire company. Dropping Ticketfly would allow Pandora to focus on its new premium subscription business to compete with Spotify. 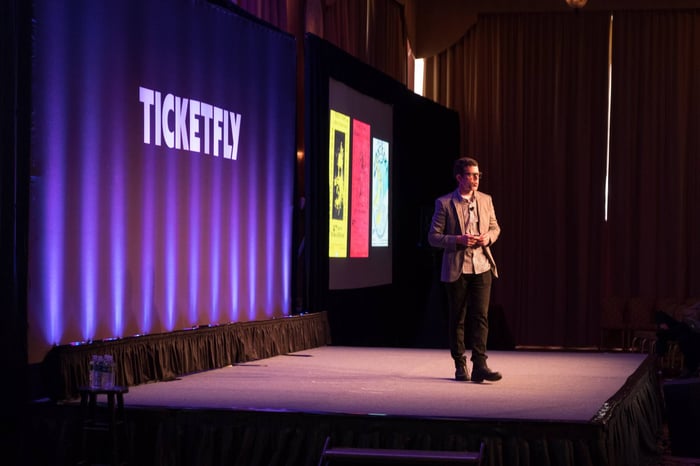 Why Ticketfly was a mistake

When Pandora bought Ticketfly, it was struggling to grow sales in the face of competition from Live Nation's (NYSE:LYV) Ticketmaster. After selling about $500 million in gross ticket value in 2014, it sold just $490 million worth of tickets in 2015.

Sales did rebound in 2016, growing to $615 million, but it's unclear what kind of impact Pandora's concert recommendations actually had on sales growth. Ticketmaster gross primary ticket value increased 7% in 2016, but its smaller resale business grew 24% -- about the same rate as Ticketfly.

More importantly, Ticketfly was an unnecessary purchase for Pandora. Pandora could have simply partnered with Ticketfly and Ticketmaster as well as several other ticket vendors. That's exactly the strategy Spotify is using, generating commissions on ticket sales and effectively monetizing its user data and engagement.

By purchasing Ticketfly, Pandora limited itself to only promoting concerts on Ticketfly. It also took away any potential promotion from Spotify thanks to the competition between the two companies. So, it's limiting the use of its data, and limiting the advertising market for Ticketfly. That's not very synergistic.

Why sell Ticketfly so soon?

In addition to its first-quarter earnings release earlier this month, Pandora also announced a $150 million investment from investment firm KKR. The deal will close 30 days after the initial announcement, June 7. That essentially puts a shot-clock on Pandora to sell itself.

It might be easier for Pandora to sell itself if it can find a separate buyer for Ticketfly. As mentioned, the two businesses -- music streaming and ticketing -- never really belonged together, and Ticketfly represents a half-billion-dollar deadweight Pandora could shed.

Even then, finding a buyer would be difficult. Sirius XM (NASDAQ:SIRI) remains the most likely buyer, but rumors of Sirius buying Pandora have been around for years now. Talks between the two companies have reportedly started up again, but a deal doesn't seem any more likely today than it did 12 months ago. Perhaps shedding Ticketfly would make Pandora more attractive for Sirius.

If Pandora can sell Ticketfly, it makes the company much more streamlined, which is necessary if it's going to continue as an independent company, too. Management introduced two new subscription products at the end of last year, and it's aggressively pursuing the premium music subscription service market. The company saw accelerated subscription revenue growth in the first quarter of 19%, and that could accelerate further after launching Pandora Premium, an on-demand streaming service, in mid-March.

Nonetheless, Pandora is playing catch-up in the ultra-competitive on-demand streaming market. At the same time, it's losing listeners for its free service. An acquisition may be its best bet, but it's a tough sell for management. Shedding Ticketfly so it can focus on growing premium subscriptions is a much more realistic strategy.