Please ensure Javascript is enabled for purposes of website accessibility
Log In Help Join The Motley Fool
Free Article Join Over 1 Million Premium Members And Get More In-Depth Stock Guidance and Research
By Dan Caplinger - May 23, 2017 at 3:30PM

The stock market continued to gain ground on Tuesday, with major benchmarks rising back toward key levels. The S&P 500 finished the day just below the 2,400 mark, and the Dow remains close to 21,000. Market participants pointed to the Trump administration's budget proposals as having no real surprises, and they were generally satisfied with the lack of drama surrounding its release. At the same time, several individual companies had good news that helped keep the mood on Wall Street positive. Diana Shipping (DSX 5.05%), AK Steel (AKS), and Take-Two Interactive (TTWO -1.90%) were among the best performers on the day. Below, we'll look more closely at these stocks to tell you why they did so well.

Shares of Diana Shipping climbed 8% in the wake of the release of the company's first-quarter earnings report. The shipping company saw revenue rise slightly, and Diana's net loss narrowed a bit from year-ago levels. More encouraging was the fact that the size of Diana's fleet grew, and average daily charter rates were up 14% even as daily average operating expenses fell by more than 11% from where they were during the first quarter of 2016. Investors following the shipping company had expected wider losses, but the real question facing Diana Shipping is whether the global economy will recover adequately to restore international shipping volumes to past levels. If that happens, then better industry conditions could lift Diana shares a lot further. 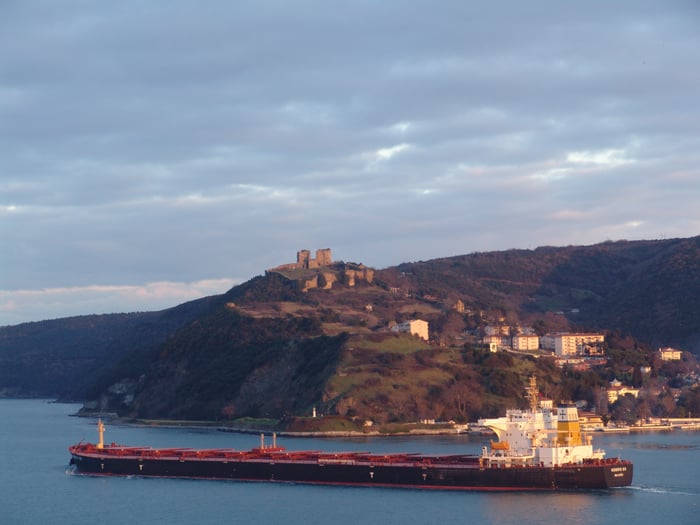 AK Steel gets a key sign-off

AK Steel stock strengthened by 9% after getting good news from a regulatory agency. The Occupational Safety and Health Administration had been investigating allegations of hazardous conditions at the Middletown Works worksite, with a March letter to the agency stating that hazards included a lack of certification among welders and the failure to keep welding logs for certification purposes. AK Steel responded at the time that it had indeed certified almost 200 of its workers as welders, and OSHA concluded that the case should be closed because the hazardous conditions alleged did not in fact exist. That's good news for a company that has already had plenty of other things to worry about, including difficult industry conditions and competitive efforts from other steelmaking rivals.

Finally, shares of Take-Two Interactive climbed over 5%. The video-game maker released its fiscal fourth-quarter financial results Tuesday morning, which included full-year revenue gains of 26% and a 19% rise in bookings from the company. For the fourth quarter alone, sales jumped by more than half on strength in key franchise offerings, including Mafia, Grand Theft Auto, and various sports-related offerings. The results were even strong enough to offset the bad news that Red Dead Redemption 2 won't be released until next April at the earliest, which will mean that Take-Two won't see any positive impact from the release during the coming fiscal year. As entertainment options continue to perform strongly, it'll be important for Take-Two to keep up the pace and continue to deliver the new game offerings that its customers want. If it does, though, further share-price gains are possible.