Please ensure Javascript is enabled for purposes of website accessibility
Log In Help Join The Motley Fool
Free Article Join Over 1 Million Premium Members And Get More In-Depth Stock Guidance and Research
By Maxx Chatsko - May 24, 2017 at 11:07AM

This week, Arconic will hold what may be the most important annual shareholder meeting in its history. No matter how the votes shake out, here are three long-term opportunities available for the company.

The separation of Alcoa (NYSE: AA) into two separate publicly traded companies has been followed by more drama than anyone thought was possible for a boring old aluminum producer and parts manufacturer. The unfolding soap opera may have peaked when Arconic (NYSE: ARNC) CEO Kaus Klienfeld was ousted over a letter and a soccer ball, but the annual shareholders meeting this week could still top that. Most of the entertainment has been provided by activist investor Elliott Management sniffing around Arconic.  While the $12 billion company made out with the more promising components of the legacy business -- and most of the debt -- the hedge fund believes it's underperforming peers with declining sales and growing losses, and has several well-founded gripes about the structure of the board of directors.

The involvement of Elliott has already fueled several changes at the lightweight metals engineering leader, and increased the bear population significantly. While a more dramatic shake-up on the board of directors could follow the annual shareholders meeting this week, the outcome won't change the long-term whacks at growth available to Arconic. Here are three opportunities that bears -- and even bulls -- should know. The automotive market has been a key driver for Arconic in recent years as automakers increasingly turn to lightweight aluminum frames and parts, which add strength at a lighter weight than steel and improve fuel efficiency. In fact, automotive revenue increased 33% year over year during the first quarter of 2017 -- leaping to the third-largest market for the company. It was responsible for $58 million, or 13%, of the period's sales.

The growth is being driven by Arconic's Micromill technology, which creates an aluminum alloy with considerable advantages over incumbent aluminum and high-strength steel materials.

Micromill technology has resulted in step change improvements in two former bottlenecks keeping aluminum from broader use in automotive markets: formability and production time. It has condensed a 20-day production process into just 20 minutes. It played a key role in landing multiyear supply agreements with Nissan (for which Arconic is the sole aluminum supplier), Fiat Chrysler, and Ford Motor Company, specifically for the Ford F-150 and F-250 models.

Weight reduction to increase fuel economy has been the main driver of growth to date, but the coming tsunami of aluminum-intensive hybrid and electric vehicles hint the trend has long-term staying power.

Acronic's Micromill technology has also made an impact in aerospace markets. Specifically, in late 2016, it led to a $1 billion multiyear contract with Airbus that will ensure the company's sheet and plate products are represented on every Airbus platform. The supply agreement was the also the first to include another new technology, called the "very thick plate stretcher," which will allow for the largest high-strength wing ribs in the industry. The state-of-the-art technology will be commissioned in the second quarter of 2017.

Months before the Airbus supply agreement was announced, Arconic revealed a $470 million contract with Embraer for its new E2 aircraft. While there are opportunities for the company's new rolled products technologies, investors should be aware that many new aircraft designs are turning away from aluminum frames and parts. However, the company is well positioned to capitalize on the new material trend: titanium alloys. 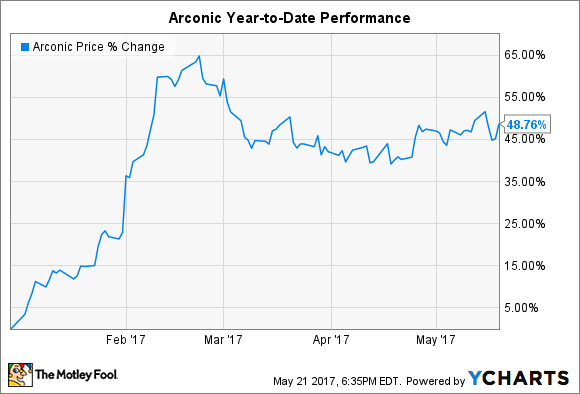 Newer aircraft designs lean heavily on lightweight titanium alloys. From airframes to landing gear components to (especially) high-efficiency jet engines, the metal is driving growth for specialty metals producers. Of course, the shift away from aluminum airframes will hurt the largest portion of Arconic's business, but it hopes to offset the declines with gains from newer customer trends.

So far, so good. In the first quarter of 2017, commercial airframe revenue witnessed a 1% decline year over year, but that was offset by a 9% increase in commercial engine parts. Overall, the aerospace industry will be a key growth driver for the business -- even if contributions from end uses get shuffled around in the coming years.

The potential for 3D metal printed parts in automotive and aerospace (and other) markets is huge, but remains largely untapped and still in the earliest stages of commercialization. The opportunity is not lost on Arconic, however, which has made strategic investments in additive manufacturing capabilities within its engineered products and solutions segment.

At the moment, the company's approach appears to revolve around two focuses. First, the production of metal powders -- alloys of aluminum, titanium, and nickel -- customized for various additive manufacturing processes. That could allow Arconic to capitalize on the opportunity in the short term by becoming a supplier of high-quality materials for 3D metal parts producers, much as it has for traditional rolled and sheet materials.

Second, the company continues to invest in longer-term opportunities including an in-house manufacturing process called Ampliforge. R&D continues in efforts to "improve production speeds, reduce costs, and achieve geometries not possible through traditional [manufacturing] methods," according to SEC filings. The opportunity presented by selling metal powders is impressive enough, but the potential to create an end-to-end additive manufacturing process could prove valuable with customers, too. It's too early to get overly excited, but this is something for long-term investors to keep on their radars.

Despite the involvement by Elliott, it's worth pointing out that Arconic posted year-over-year revenue growth of 4.5% in the first quarter of 2017. That figure increases to 8% if the packaging business, which will likely cease to exist in the next several years, is excluded. Additionally, many new technologies capable of creating new business -- Micromill, the "very thick plate stretcher," and Ampliforge -- are being installed at new facilities, undergoing commissioning, or reaching the next stage of development in the first half of 2017. Whether shareholders vote to keep the status quo or install new directors at this week's meeting, the management team taking the reins has several encouraging growth opportunities within reach.