Please ensure Javascript is enabled for purposes of website accessibility
Log In Help Join The Motley Fool
Free Article Join Over 1 Million Premium Members And Get More In-Depth Stock Guidance and Research
By Maxx Chatsko - Updated May 24, 2017 at 8:13AM

Stagnant revenue growth in recent years hasn't affected the share price, but it could lead to more acquisitions in key areas.

The agricultural market has been hit hard in recent years. A confluence of factors, ranging from oversupply in North America to crop-destroying floods and droughts in South America, have kept a lid on growth for the industry's leading companies. Ingredion (INGR -0.28%), which focuses on selling corn-based sweeteners and texturing ingredients to food and beverage industries, hasn't been spared. From 2014 to 2016, the ingredients leader reported full-year revenue of $5.67 billion, $5.62 billion, and $5.7 billion.

The good news is that the stock has performed remarkably well in that span, easily beating the total returns of the S&P 500. Why? Ingredion has begun traveling the well-worn path of other mature businesses. That is, the company has grown EPS and cash flow by focusing on optimizing existing operations, rather than prioritizing top line growth. Management expects that to continue this year -- along with a mix of growth investments. A look at initiatives under way hint at what's next for investors. 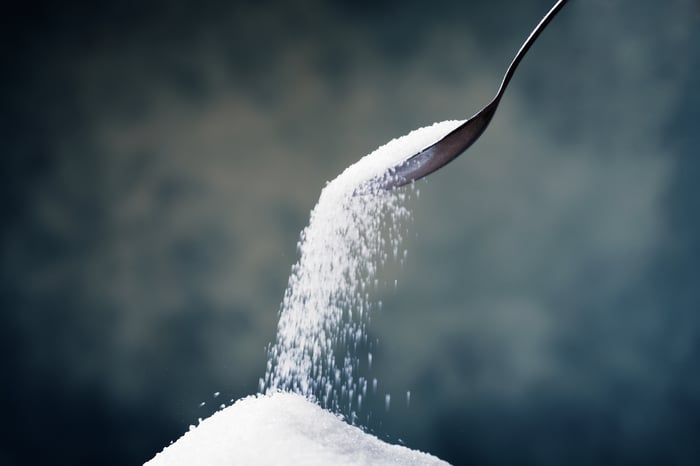 The path to a cash cow

Investors seeking out a stable company with reliable earnings and cash generation may want to consider giving Ingredion a hard look. It provides a range of ingredients that are valuable to many diverse industries. Customers reside in food, beverage, animal nutrition, paper manufacturing, brewing, and several other markets. The company classifies the products it sells into three categories:

Yet while Ingredion has made itself valuable to various customers, it has struggled to grow revenue in recent years. Thus, it has doubled down on a popular strategy for "creating shareholder value", as nearly every company that follows it explains. This includes reigning in unnecessary costs, investing in margin expansion over revenue growth, and initiating a share buyback program. The moves are aimed at increasing EPS and cash flow, even if the top line fails to grow very much.

Investors can't exactly be upset with the strategy. Full-year 2016 results demonstrated that it is in fact working.

The strategy should continue to deliver improvements in the year ahead. Management has guided for full-year 2017 adjusted EPS in the range of $7.50 to $7.80 and cash flow from operations in the range of $800 million to $850 million -- both sharp improvements compared to levels achieved in 2016. Additionally, share count has already been reduced 1.1% since the end of last year, which will further boost EPS.

Of course, there is only so much fat that can be cut out of operations, which have a limit to the efficiency they can achieve. There's no way of knowing if the company is nearing that threshold, but it stands to reason that the party will end eventually. What happens then?

Management's strategy for tapping into long-term growth opportunities centers mostly on increasing the share of high-margin specialty ingredients that respond to food industry trends, such as consumer demands for "clean labels" and "natural" ingredients. Today these are grouped within the starch and sweetener product categories, but specialty ingredients would have accounted for 26% of total sales in 2016 had they been reported separately. That's up from 24% in 2014. 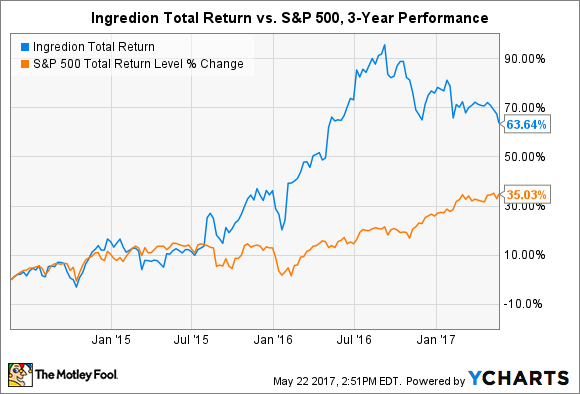 The growth in specialty ingredients is important, especially since other starch and sweetener products are falling out of favor (hello, stevia). Ingredion is currently expanding its portfolio through acquisitions, including that of TIC Gums in late December, although it may be missing out on larger and longer-term opportunities presented by industrial biotech. Either way, the last three acquisitions were specifically geared toward specialty ingredients, which again shows the priorities of management when using cash if it has to.

What's next for Ingredion investors?

Ingredion's mature business is becoming a cash cow, which should allow for much higher dividend payments or additional acquisitions, or perhaps a mix of both. A growing war chest in coming years could even allow it to rapidly play catch up on missed opportunities, such as in stevia ingredients or with innovative industrial biotech manufacturing platforms. It may take years to see a significant impact from increasing specialty ingredients sales that offset declines in other areas of the business, but the current strategy appears to put the company on solid long-term footing.