Please ensure Javascript is enabled for purposes of website accessibility
Log In Help Join The Motley Fool
Free Article Join Over 1 Million Premium Members And Get More In-Depth Stock Guidance and Research
By George Budwell – Updated May 24, 2017 at 1:30PM

Inovio Pharmaceuticals' experimental HIV vaccine is off to a promising start.

Shares of the clinical-stage biotech Inovio Pharmaceuticals (INO 4.54%) gained as much as 38% today due to a positive early-stage readout for its experimental HIV vaccine called Pennvax-GP.

Digging into the details, the company reported that 71 out of 76 (93%) evaluable participants exhibited either a CD4+ or CD8+ cellular immune response to at least one of the vaccine's four antigens. The long and short of it is that this experimental HIV vaccine just produced some of the strongest immune responses ever observed in a human clinical trial, according to Inovio. 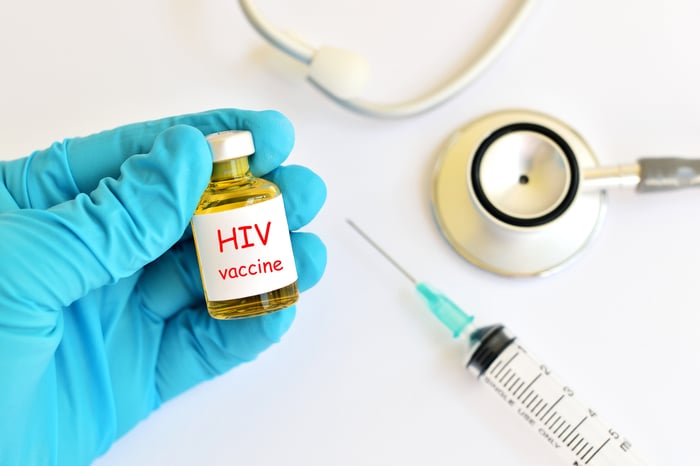 An effective and safe HIV vaccine that can prevent and/or cure patients would easily generate billions in sales in short order. As proof, Gilead Sciences (GILD 2.08%), the market share leader in terms of HIV drug sales, rakes in around $13 billion annually for its HIV product line. If Inovio can capture even a sliver of this multi-billion-dollar market, it would be a ginormous win for shareholders, especially in light of the company's present market cap of only $657 million.

Before investors get too excited, though, it's important to remember that this HIV vaccine is years away from even a possible regulatory filing. Moreover, Inovio also has a disappointing track record when it comes to developing clinical candidates in a timely fashion. The $25 million National Institute of Allergy and Infectious Diseases contract that originally provided funding for this vaccine, for instance, was signed roughly eight years ago, back in 2009. That's not exactly an encouraging timeline from a value-creation standpoint.

Having said that, I think that these promising preliminary results might be enough to warrant a deeper dive from leaders in the space, like Gilead. After all, Gilead arguably has the most to lose if a competitor introduces a disruptive HIV vaccine into the market, and it has tons of cash to sign licensing deals. In other words, Inovio may be able to monetize this promising clinical asset sooner, rather than later. Stay tuned.