Please ensure Javascript is enabled for purposes of website accessibility
Log In Help Join The Motley Fool
Free Article Join Over 1 Million Premium Members And Get More In-Depth Stock Guidance and Research
By Adam Levine-Weinberg – Updated May 24, 2017 at 6:26PM

JetBlue stumbled earlier this year, but it is quickly getting back on track.

However, JetBlue reacted swiftly by cutting its capacity growth for the rest of the year, with a particular focus on underperforming markets. Meanwhile, demand has started to rebound. As a result, the company's unit revenue trends have been improving quickly. This has allowed JetBlue stock to recover nearly all of the ground it lost earlier this year -- and it has plenty more upside. 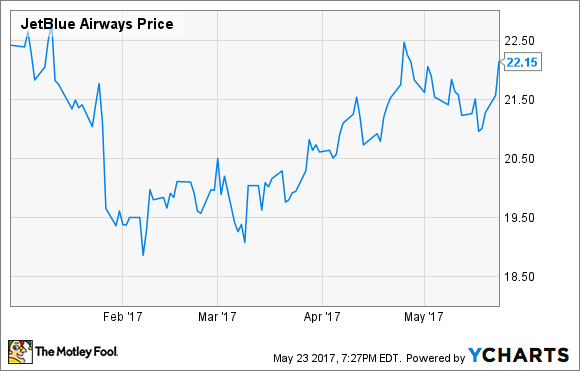 While JetBlue's first quarter RASM performance was poor by any measure, it's important to recognize that the timing of various holidays represented a significant drag on performance. First, with New Year's Day falling on a Sunday, the winter holiday peak period ended earlier than it had in 2016. Second, Easter fell in April this year, compared to March of 2016.

By contrast, in the second quarter, JetBlue is benefiting from the Easter calendar shift, which helped drive a double-digit RASM increase in April.

Underlying demand is improving, too. JetBlue expects unit revenue to remain in positive territory in May and June. Last month, it predicted that RASM would rise 3%-6% for the full second quarter. At an investor conference this week, it raised that guidance. JetBlue now expects a 4%-6% RASM increase this quarter.

JetBlue also indicated that its outlook for the third quarter is improving. It's still early, but advance booking trends are solid so far and close-in demand has been strong recently.

Like other leisure-focused airlines, JetBlue will probably record its highest unit revenue growth of the year in the second quarter, due to the significant impact of the Easter shift. But on a normalized basis, revenue trends are likely to remain strong in the second half of 2017, despite accelerating growth at JetBlue.

For example, JetBlue's schedule tweaks, implemented in early February, will take full effect by the summer. Additionally, the carrier will finally be able to move its Fort Lauderdale-Mexico City and Orlando-Mexico City flights to more convenient times in early September. This should fix its long-running unit revenue problems on those routes. JetBlue will also add a second daily flight on both routes at that time.

Most importantly, the expansion of JetBlue's highly acclaimed Mint premium service will accelerate this fall. JetBlue is adding 14 Mint-equipped A321s to its fleet this year, in order to upgrade seven transcontinental routes to Mint service. 10 of those planes will come in the second half of the year.

Over the past three years, JetBlue has achieved big unit revenue gains on routes where it has deployed Mint. As more routes convert to Mint service, it should boost companywide unit revenue in a meaningful way.

Better cost control will help, too

Improving cost performance will also be critical as JetBlue tries to get earnings growing again. Non-fuel unit costs increased 3.3% in Q1 and are expected to rise 4.5%-6.5% this quarter. However, these increases were partially driven by the timing of maintenance events. Unit cost growth will then recede to a low single-digit level in the second half of the year.

Looking ahead, JetBlue has said that unit costs will increase at a compound annual growth rate of less than 1% from 2018-2020, as JetBlue adds 12 seats to each of its A320s and implements a new structural cost reduction initiative.

Additionally, JetBlue recently restructured its aircraft orders, slashing capex by about $800 million between 2017 and 2020. This reduction in spending -- along with JetBlue's strong profitability and solid balance sheet -- will allow the company to return a meaningful amount of cash to shareholders in the coming years.

In sum, JetBlue is on pace to return to consistent EPS growth as soon as this quarter. As investors become more comfortable with the company's earnings trajectory, JetBlue stock may continue gaining momentum.

Why Airline Stocks Are Down Today
351%