If you had any doubts about Netflix's commitment to its international expansion, think again.

Netflix, Inc. (NFLX 0.60%) announced the opening this week of a new European customer-service center in Amsterdam, which will support customers in 11 European countries, including Belgium, Denmark, Finland, Ireland, Luxembourg, the Netherlands, Norway, Poland, Romania, Sweden, and the U.K. The location will initially employ 170 personnel, but that number will increase to 345 by the end of the year and grow to over 400 by 2018.

Amsterdam already plays host to Netflix's headquarters that serves Europe, the Middle East, and Africa (EMEA), which has more than doubled its workforce since the beginning of 2016 and was forced to move to a larger location. The EMEA headquarters is staffed by more than 120 employees from 18 countries in areas such as finance, legal, business development, public relations, marketing, and recruiting. 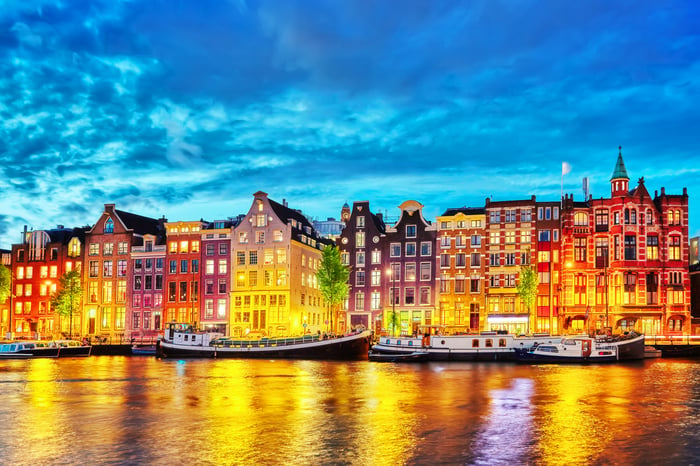 A new customer service center in Amsterdam, Netherlands is part of a larger move in Europe. Image source: Getty Images.

This is all part of a larger push to connect with audiences in Europe. With an estimated population of 739 million,  this is an important market for the streaming giant in its quest to expand its international subscriber base. An emphasis on quality content tailored to local audiences will likely attract customers in greater numbers as growth in its U.S. market begins to slow.

The company has seen previous global success with global fare such as Narcos, which is produced and set in Colombia and chronicles the life of a Colombian drug lord Pablo Escobar, and The Crown, a biographical account of the reign of Queen Elizabeth II that's produced in the U.K. Other successful shows with an international flavor include Brazilian-produced 3%, and Sense8.

Netflix is looking to produce shows for foreign viewers that will also appeal to its global audience, which is a crucial element of the company's future growth.

While announcing the opening of its new customer-service hub, Netflix took the opportunity to highlight plans for six upcoming European originals in 2017 and to showcase two of them. Dogs of Berlin will be written, produced, and filmed in Germany and released in 2018. The edgy modern crime drama will detail the lives of two police detectives battling the Berlin underworld and will be helmed by award-winning filmmaker Christian Alvart.

Netflix's 3% captured a worldwide audience from its production in Brazil. Image source: Netflix.

Netflix's second French original series, sci-fi drama Osmosis, will be fronted by showrunner Audry Fouche and is set in Paris in the near future. The show details the consequences of a dating app that can find the user a perfect match, but at a cost.  These projects are part of a $1.75 billion commitment to European content.

Last month, Netflix released its first original series from Spain, Las Chicas del Cable ("Cable Girls"), which takes place in 1920s Madrid and follows the lives of four women recently hired as switchboard operators working for the National Telephone Company. The premise is deceiving, however, as robbery and murder wait in the wings.

As Netflix moves to replicate its highly successful U.S. format, it will follow the same playbook that brought it success here -- by providing more content, it will attract more subscribers, and with the revenue from additional subscribers, it can afford more content. The company is betting big on this premise, and while it has been successful thus far, any break in that virtuous cycle could lead to disaster.

The company continues to burn cash, with cash flow at negative $423 million in the most recent quarter and a combination of content liability and long-term debt that exceeds $10 billion. Most of that amount is future obligations, which gives the company the opportunity to continue to grow its subscriber base.

Netflix is building an army in Europe to gain market share and plug the continent into its virtuous cycle. If the company's success in the U.S. is any indication, I believe it will succeed.