Please ensure Javascript is enabled for purposes of website accessibility
Log In Help Join The Motley Fool
Free Article
Join Nearly 1 Million Premium Members And Get More In-Depth Stock Guidance and Research
By Dan Caplinger – May 24, 2017 at 8:01AM

For investors, the question isn't just why shares of Straight Path Communications, Applied Optoelectronics, and Tellurian climbed so far, so fast; it's whether they have more room to run.

When a stock soars, investors take notice. In those extremely rare cases when a company's share price climbs 400% or more in a single year's time, it points to the sort of extraordinary circumstances that make many wonder if those gains are just the beginning of an even bigger rise.

With that in mind, it makes sense to take a closer look at recent multibaggers Straight Path Communications (NYSEMKT: STRP), Applied Optoelectronics (AAOI -4.25%), and Tellurian (TELL -3.98%), to try to figure out whether further big gains are likely in their futures. 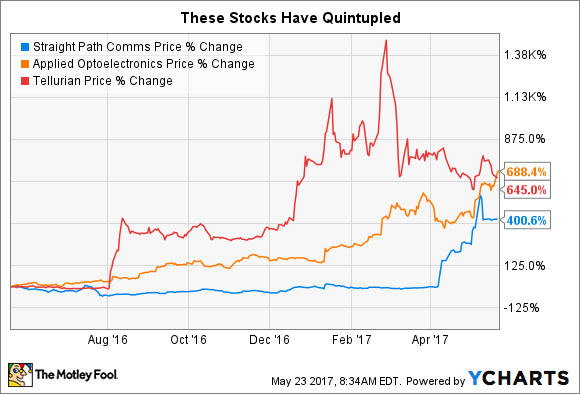 Straight Path gets an offer it can't refuse

Straight Path Communications has posted almost exactly a 400% return over the past 12 months. That sharp rise came as a shock to many investors, who had gotten used to the holder of wireless spectrum license assets trading in a relatively sedate manner.

That all changed in April, when AT&T (T -2.22%) made a bid to purchase Straight Path in a deal that sent the stock up 150% in a single day. Many believed that AT&T's $96 per share bid would be a fitting end to Straight Path's efforts to divest its spectrum assets. Yet rival Verizon Communications (VZ -0.77%) came in with an even bigger bid, and after a few rounds of a bidding war, Verizon ended up with the final deal at $184 per share. Investors had briefly hoped that another bid would come in, but AT&T bowed out, which makes it unlikely that Straight Path will see any further gains before its acquisition by Verizon is completed.

Elsewhere in the technology world, Applied Optoelectronics provides fiber-optic networking services to the telecommunications industry. Much of the stock's gain of nearly 700% over the past 12 months stemmed from the rise in demand for its services, which have become increasingly relevant as enterprise customers look to implement data centers and other cloud-computing based solutions. Solid performance from the business has built momentum for the stock, and investors now expect a round of upgrades by telecommunications providers could spur dramatic additions in capacity for fiber-optic networks.

Most recently, Applied Opto's first-quarter results showed a doubling of data center revenue, and overall gains of 91% on the top line. Strong profits have also helped bolster the stock, and the company's management continues to have upbeat views about its prospects. With implementation of new fiber optic assets likely, Applied Optoelectronics has many investors excited for what could become a long period of strength for its core business.

Finally, Tellurian managed to bounce back from adversity, rising almost 650% over the past year. Yet alone among these three stocks, Tellurian hasn't yet recovered all of its lost ground since 2014. Even after its huge gains recently, shares of the liquefied natural gas specialist are down more than 40% over the past three years. The explanation relates to the way in which Tellurian stock became available to the public. Last August, the then-privately held company did a reverse merger with Magellan Petroleum, which was already publicly traded. As a result, it was Magellan's stock-price history that Tellurian had to overcome.

With the move, Tellurian shareholders gained exposure to the Driftwood LNG project in Louisiana, and big players in the energy industry have paid attention. In November, General Electric's (GE -2.36%) oil and gas division made a $25 million preferred stock investment in Tellurian, and Total (TTE 0.58%) followed suit in December, spending more than $200 million for an almost one-quarter equity stake in the LNG specialist. Tellurian isn't expecting to start construction of Driftwood until next year, and production there might not start until 2022. But investors think that the project could be extremely profitable, although the speculative nature of the company right now has made Tellurian shares quite volatile.

You won't often find stocks that quintuple, but when you do, it's worth taking a closer look. Of the three, Applied Optoelectronics seems to have the clearest prospects for future growth, but the potential rewards from Tellurian are also quite extensive.