Please ensure Javascript is enabled for purposes of website accessibility
Log In Help Join The Motley Fool
Free Article Join Over 1 Million Premium Members And Get More In-Depth Stock Guidance and Research
By Tyler Crowe - Apr 3, 2017 at 11:11AM

The new venture from former Cheniere Energy CEO Charif Souki is looking an awful lot like his first one.

Shares of new LNG export venture Tellurian (TELL 0.34%) fell 34% in March. While there was no real news from the company to point to as the definitive reason for the stock drop, sharp pops and drops are probably the name of the game for this company that wants to be the next company to build an LNG export terminal in the continental U.S. 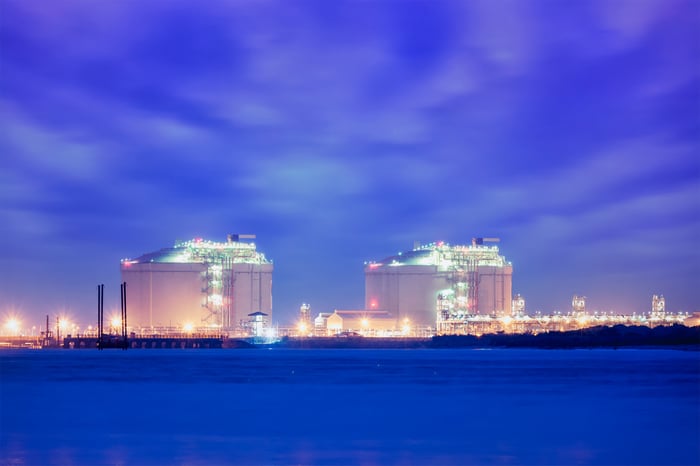 Probably the best way to describe Tellurian today is to look at Cheniere Energy (LNG -0.81%) about five to six years ago. At that time, then-CEO Charif Souki made a big bet that shale gas in the U.S. was cheap and bountiful enough that we would soon be producing more than what the U.S. could consume. So, he wanted to transform the company's LNG import facility into an export facility. At the time it was an unprecedented move, and to some seemed outrageous.

Over time, though, it obtained approval to export to non-free trade agreement companies, signed multiple 20-year take-or-pay contracts, and has so far brought two of its four LNG trains online both on time and within budget. It was the test case that has proven an LNG export facility in the U.S. is feasible.

Today, Tellurian looks a lot like that early version of Cheniere. Charif Souki is the Chairman of the board after being booted from Cheniere at the end of 2015, and his former CFO Meg Gentle is the CEO of this new venture. The company is looking to build a 26 million ton per year LNG export facility in the U.S. Gulf Coast. It has recently received permission to export LNG to free trade approved nations, and today it just filed an application to build its new facility.

The two big differences between this attempt to build an LNG export facility and the first time at Cheniere is that the executive team has done this once before and the new facility is a greenfield (brand new) construction. One can assume that the former Cheniere managers have learned some lessons they can apply to this venture, which should make several steps much easier. Also, after seeing the blueprint from Cheniere Energy, creditors may be more willing to give financing to the facility.

The thing that will make it more challenging, though, is that unlike Cheniere's Sabine Pass facility that was a converted LNG import facility, this one will be starting from scratch.

One thing that was memorable about Cheniere Energy's stock several years ago was that it was volatile as all get out. With no revenue generating assets for several years, Cheniere's stock was just speculation of the idea that someone could build and operate an LNG facility.

Chances are, Tellurian's stock will follow a very similar path. It will likely pop when it announces regulatory approval or signs a take-or-pay contract, and it will likely have bad days when it raises capital through equity. What investors should look for is Tellurian's management team meeting similar milestones that Cheniere hit over time: A significant portion of its production capacity under long-term contracts; regulatory approval for export and construction; and meeting funding & development milestones. If this story can unfold like the Cheniere story, then investors will be happy they hung on over the long term. {%sfr%}