Please ensure Javascript is enabled for purposes of website accessibility
Log In Help Join The Motley Fool
Free Article Join Over 1 Million Premium Members And Get More In-Depth Stock Guidance and Research
By Leo Sun - May 24, 2017 at 6:06PM

This Chinese internet tech giant might be a much better value play than its industry peers -- even as its stock hovers at a six-year high.

Warren Buffett famously told investors to be "fearful when others are greedy, and greedy when others are fearful." Dedicated followers of that mantra would probably dismiss Chinese online media giant SINA (SINA) -- which rallied 120% over the past 12 months to a six-year high -- as a "greedy" play.

However, a stock also generally hits new highs because the company has thoroughly impressed investors. In SINA's case, it's because the tech giant has beaten both top and bottom line estimates for ten consecutive quarters -- and could continue doing so for the foreseeable future. Therefore, I believe that it makes sense to "get greedy" with SINA today, before more investors fully understand its growth potential. 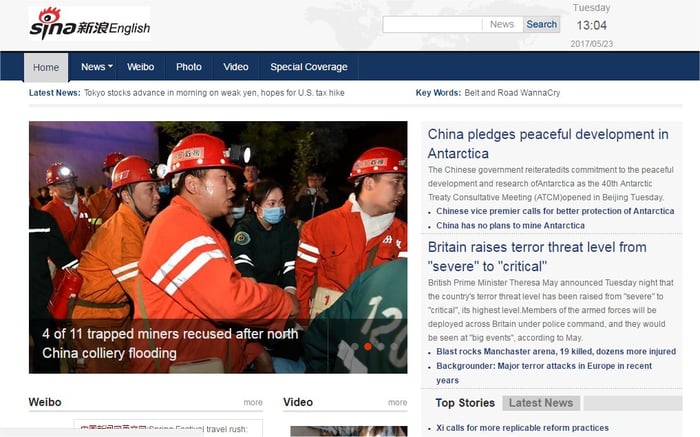 What does SINA do?

SINA is one of China's biggest internet portals. Its network includes dozens of news channels for sports, finance, entertainment, travel, fashion, and other topics -- in both desktop and mobile formats.

It also owns a majority stake in Weibo (WB -1.63%), the popular microblogging platform commonly referred to as the "Twitter of China." SINA spun off Weibo as a publicly traded company back in 2014, and e-commerce giant Alibaba is the new company's second largest shareholder.

How fast is SINA growing?

Weibo now reaches 340 million MAUs, making it bigger than Twitter. Its platform is also integrated with SINA's news feeds and Alibaba's e-commerce and payment platforms. SINA is also tremendously profitable. Its non-GAAP earnings rose 17% in 2015, 62% in 2016, and analysts anticipate 86% growth this year -- thanks to steady improvement in its gross and operating margins.

The following chart reveals that trend over the past five years, which was supported by the Weibo spinoff, robust revenue growth at both its portals and Weibo, and improved cost controls. 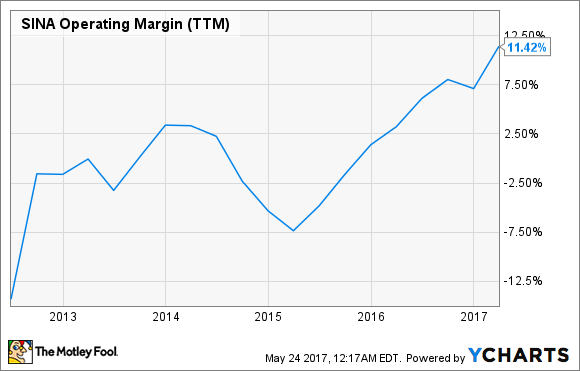 It's a safer bet on Weibo than Weibo

Some growth-oriented investors might think that it's a better idea to just buy Weibo, which consists of SINA's fastest growing business without the weight of its older portal businesses. That sounds logical, since Weibo's revenue and non-GAAP earnings are expected to respectively grow 62% and 87% this year -- which outpace the growth of its parent company.

However, Weibo also trades at 122 times earnings, compared to SINA's P/E of 32 and the industry average of 37. This makes Weibo look expensive relative to its parent company, the industry, and its earnings growth potential -- while SINA looks slightly undervalued.

SINA also has a lower multiple than many other hot Chinese tech stocks on the market today -- Tencent (TCEHY 1.11%) trades at 51 times earnings, Baidu has a P/E of 42, and Alibaba has a P/E of 57.

It's a ripe takeover target

SINA, Weibo, and Alibaba are currently allied against Tencent, which has been expanding its popular messaging app WeChat into a monolithic platform which lets users receive news updates, make mobile payments, hail cabs, order food, play games, and accomplish other tasks -- all without leaving the app.

Tencent has 889 million MAUs on WeChat, 868 million MAUs on its older QQ platform, and 595 million MAUs on its Qzone social network. The pressure from that expanding ecosystem has caused some analysts to speculate that companies like SINA, Weibo, Alibaba, and even Baidu will need to consolidate their businesses to remain competitive.

Last September, the Young China's Business Blog speculated that a new partnership between Weibo and Alibaba's Youku Tudou video streaming site and UCWeb browser could pave the way for Alibaba to acquire SINA. While that's all speculation for now, taking over the $7 billion company (and becoming Weibo's owner) would be a smart move for any Chinese tech company feeling threatened by Tencent's weed-like growth.

Get greedy, but not too greedy...

Based on these facts, I think that it might be a good time to start a position in SINA. However, all sorts of negative headlines -- like a slowdown in the Chinese economy, new regulations on ads, or tighter censorship of content on SINA and Weibo -- could sink both stocks. Therefore, investors should gradually build a position in SINA over the next few months, instead of taking on a full position at these multi-year highs.