Please ensure Javascript is enabled for purposes of website accessibility
Log In Help Join The Motley Fool
Free Article
Join Nearly 1 Million Premium Members And Get More In-Depth Stock Guidance and Research
By Anders Bylund, Chuck Saletta, and Brian Feroldi – May 25, 2017 at 10:15AM

Some stocks hit highs once and never come close again. These three stocks are different.

Stocks breaking new ground with strong price gains are a dime a dozen. Often, 52-week highs can be frustratingly transient peaks, levels reached for very particular reasons and then never seen again. In the long run, you're really looking for stocks primed to set price records -- again and again.

We asked three of our top Motley Fool contributors to share a few investment ideas in that vein, for which prices are riding high today but likely to soar even further in the future. Read on to see why they selected Netflix (NFLX -0.27%), MarketAxess Holdings (MKTX -8.96%), and Wal-Mart Stores (WMT -1.33%). 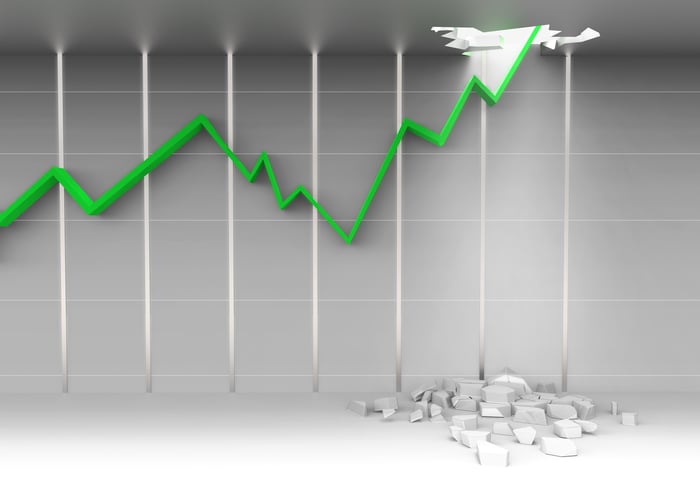 Anders Bylund (Netflix): Digital-video veteran Netflix has gone from strength to strength in recent quarters, and its share price has risen more than 60% in 52 weeks.

The five-year picture looks even better, including a 7-for-1 stock split and a near-worldwide service expansion -- along with returns of 1,500%.

In the last 10 years, Netflix has evolved from DVD mailers to digital streaming, survived the Qwikster debacle, and destroyed the old-school video-rental market along the way. Against that backdrop, Netflix investors have enjoyed a 4,650% gain.

If you thought Netflix had reached its maximum value in the summer of 2011, you've missed out on its share price more than quadrupling from that high point. The stock also more than doubled from the all-time highs set three years ago, gained 33% from what might have felt like the end of the line in late 2015, and gained 27% in 2017 alone. And it reached fresh all-time record prices as recently as last week.

If you think that it's different this time -- that Netflix shares are destined to head for lower prices and might never soar this high again -- I'm afraid you still don't see the big picture.

The company has largely completed its worldwide rollout of streaming-video services and turned the spigot to "profit generation." Cash flows will remain negative for another few years due to Netflix's ambitious and cash-intensive content-production schedule, but that line will also turn green eventually. Share prices will surely follow suit.

There may be a few bumps in the road ahead, but the long-term value-creation picture is clear. Netflix is the gift that keeps on giving, and will continue to be for years to come.

A trading platform with room to run

Brian Feroldi (MarketAxess Holdings): Stock investors have been buying and selling securities electronically for decades, so you'd be forgiven for assuming that transactions on the fixed-income market happen that way too. However, that's not the case at all. Even today the majority of fixed-income trading takes place in one-on-one transactions over the phone or by email.

MarketAxess Holdings is a company that is trying to change that. It has created what has become the largest electronic bond-trading platform in the world, which enables its users to buy, sell, and research fixed-income securities with ease. Big money managers have been rapidly adopting this new platform for its increased transparency and rapid execution.

Being a top dog and first mover in this marketplace has provided MarketAxess with a big advantage over potential rivals. Buyers and sellers naturally want to gravitate toward the biggest platform since it maximizes their trading opportunities and liquidity. That's allowed MarketAxess' top line to head in the right direction for years.

What's wonderful about this business is that MarketAxess' platform is highly scalable. Adding one more user and processing one more transaction costs very little, which allows the company's profit growth to outpace revenue growth. As an example, last quarter the company's revenue grew by 17% but its pre-tax income jumped more than 25% thanks to margin expansion. This has been going on for years, which is a big reason why the company's profits -- and stock price -- have been rising quickly. 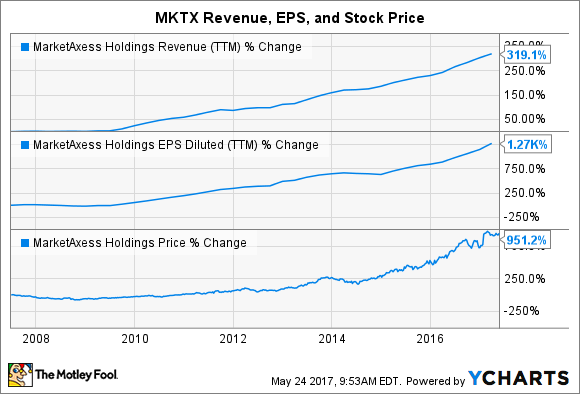 While MarketAxess has made a lot of progress at bringing the bond markets into the 21st century, the company still has plenty of market share left to capture. That potential hints that MarketAxess' profits should continue to soar for years to come, which I think makes this a top-notch stock to buy even though it is trading at a premium.

Chuck Saletta (Wal-Mart): Fresh off the news that its online sales surged by over 60% year over year in the most recent quarter, Wal-Mart saw its shares near 52-week highs. The dramatic increase in its ability to sell stuff online -- including a strong push into grocery pickup I suggested four years ago -- is helping the company leverage its physical presence for its electronic sales.

That Wal-Mart is finally figuring out ways to flex its incredible physical-distribution advantage to drive online sales is giving the market hopes that it can thrive in our ever more connected economy. What makes the stock still worth buying today despite trading near its 52-week high is the fact that its shares still look reasonably valued, even after that recent lift.

Wal-Mart recently traded hands at just under 18 times its trailing earnings and around 17 times its forward earnings estimates. In addition, current market prices give shareholders a respectable 2.6% dividend yield, and Wal-Mart has increased that dividend for over 40 consecutive years. In a time when the S&P 500 is trading at around 25 times its trailing earnings and only pays a 1.9% dividend yield, Wal-Mart looks like a relative bargain.

The competition driving the shifting marketplace is real, and Wal-Mart is only starting to establish its course in this era of merging online and offline retail. It has to continually prove its ability to thrive, but as of now, it looks like a recent marketplace winner with the opportunity to continue to grow.