Please ensure Javascript is enabled for purposes of website accessibility
Log In Help Join The Motley Fool
Free Article Join Over 1 Million Premium Members And Get More In-Depth Stock Guidance and Research
By Chris Neiger - May 25, 2017 at 4:12PM

A drone specialist, a chipmaker, and an aerospace giant could be some of the best bets now for investors looking to profit from the coming rise of drones.

Drones are quickly becoming a massive opportunity for companies and investors alike. The commercial drone market is expected to skyrocket to $23 billion annually by 2022, up from just $6 billion right now.

Investors looking to tap into this burgeoning market in 2017 should consider AeroVironment (AVAV), Ambarella (AMBA) and Boeing (BA). Though none of these companies are a sure bet, these players are well positioned to become top drone stocks. 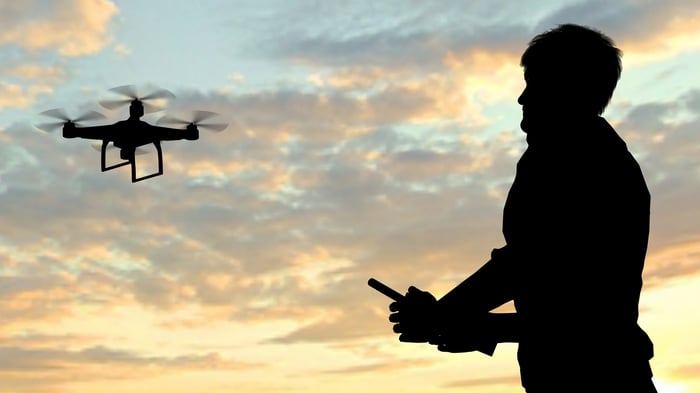 It's likely you've never heard of AeroVironment, but the company is a leader in the military drone space. It builds unmanned aerial vehicles (UAVs) for video surveillance, as well as versions that can be used for tactical purposes; now, it's taking its drone-building knowledge and applying it to the commercial market as well.

The company announced at the end of last year that it would bring a new UAV to market: the Quantix, designed for commercial applications in areas like agriculture and the energy industry. The quadcopter drone can take off using its propellers, then fly like an airplane to survey crops or industrial energy equipment.

AeroVironment earned $264.1 million in revenue in fiscal 2016, up just 2% year over year, and expects revenue between $260 million and $280 million for fiscal 2017. That's not meteoric revenue growth, but this new foray into commercial drones could be the catalyst for the company in the years to come.

Ambarella is best known as the manufacturer of the chips in GoPro's action cameras, but the company also produces similar video-processing chips for drone-makers. The company is already a key supplier for the world's largest drone manufacturer, the Chinese firm DJI, and it sells chips to other drone makers as well.

The company emphasized on its recent earnings call that it's primarily focused on consumer drones at the moment, and that the market can be a bit unstable. Management is still optimistic about drone prospects this year though. "I just want to emphasize it's going to be volatile on a quarterly basis, but we still feel pretty good this year about the drone growth," said CFO George Laplante during its fiscal fourth-quarter 2017 earnings call in late February.

Ambarella's fiscal 2017 revenue was down year over year to $310 million from $316 million, and the company expects fiscal 2018 revenue to be up just 3%. But investors should remember that the company is consistently shifting away from its reliance on GoPro, and drones are part of that plan.

Additionally, Ambarella managed to grow its fiscal 4Q 2017 revenue by 29% and its GAAP earnings per share by 253%. The chipmaker has lots of room for growth, and its exposure to the drone market should help propel that.

Boeing is a big player in the medium-sized drone space through its subsidiary, Insitu. Most of its drone sales  go to the military market, but it recently ventured into ocean drone space with its purchase of Liquid Robotics last year.

Of course, Boeing is nowhere near a pure-play in the drone space, but the company's many decades of aeronautical experience could be a strong foundation upon which it can build a successful drones business as well. Earlier this year, the U.S. Coast Guard for the first time deployed a ship equipped with a small unmanned aerial system, the Insutu ScanEagle, for a full six-week patrol. The ScanEagle drone was a success, helping the crew of the cutter apprehend multiple smuggling vessels, and that trial run could lead the way for similar uses in the future.

Boeing reported revenue of $94.6 billion in 2016, and expects a slight revenue decline in 2017 to between $90.5 and $92.5 billion. But investors looking to bet on the future of the drone market should certainly give Boeing a good look.