Please ensure Javascript is enabled for purposes of website accessibility
Log In Help Join The Motley Fool
Free Article
Join Nearly 1 Million Premium Members And Get More In-Depth Stock Guidance and Research
By Daniel B. Kline – Updated May 25, 2017 at 9:35AM

John Legere has made some new claims about his rival's network while offering some of its customers a better deal.

T-Mobile (TMUS -2.58%) has become the fastest-growing player in the wireless space by aggressively pointing out the faults of its rivals. CEO John Legere has made it his business to not only use his company's merits to win subscribers, but also to expose industry practices that are not consumer-friendly. That has put both AT&T (NYSE: T) and Verizon (VZ 0.08%) in the maverick leader's crosshairs, and he has been a convincing figure to consumers.

Legere has bragged that he forced Verizon to offer unlimited data plans, which he claims has caused major problems on the company's network. To hammer that point home, and try to win over some of its rivals' customers, T-Mobile has a new offer that Legere announced with his typical 1980s pro wrestling manager/boxing promoter swagger.

"After desperately launching unlimited, Verizon's network choked -- while our network speeds surged. Today, T-Mobile has a whopping 23% speed advantage over Verizon," he said in a press release. "So, to kick off summer, we're going BIG right out of the gate and throwing a lifeline to millions of Verizon customers. Now, you can ditch Verizon, keep your phone, and we'll even pay it off for you!"

T-Mobile's speed claims should be taken with a big grain of salt as they are based on the company's own analysis of Ookla Speed Test data. Still, T-Mobile is cheaper than Verizon, and offering incentives for customers to make the switch may work even if people are not having a particularly bad experience. 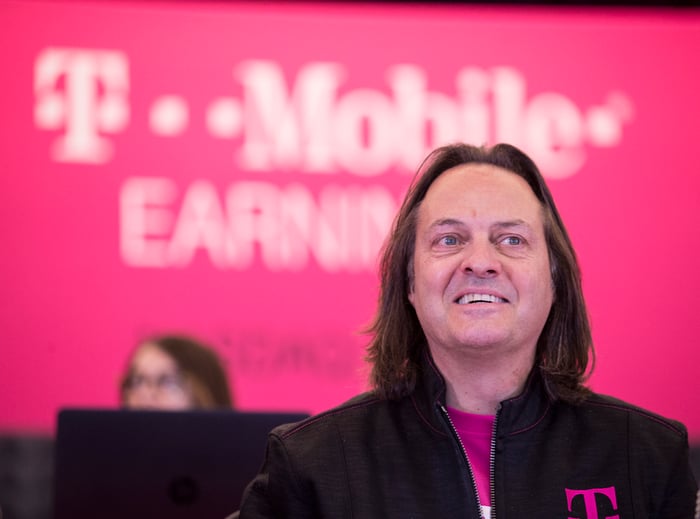 Legere is not shy about going after Verizon. Image source: T-Mobile.

What is the T-Mobile offer?

Beginning on May 31, Verizon customers with and iPhone or Google Pixel phone can bring their phones to T-Mobile and the carrier will pay off any balance they owe on the device via a prepaid credit card. This isn't a trade-in deal. The customers will be able to port their number to T-Mobile and keep their existing phone simply by swapping out the SIM card. That means there will be no need to copy over contacts, photos, or any other personal data.

There is a small catch. To get the deal, customers must add T-Mobile's Premium Device Protection program for each phone brought over at $15 a month. They also are responsible to use the money from the prepaid credit card to actually pay off Verizon.

Exactly how good a deal this is for consumers largely depends upon how much the Verizon customer owes on his or her phones and whether they already pay for insurance. If, for example, they have two new iPhones 7s they just purchased, the savings will be well over $1,000. If they also have Verizon's most-common insurance, which costs $11 per phone, then the T-Mobile offer may be very attractive.

Legere's company has very simple pricing where all taxes and fees are included in its quoted rates and all plans offer unlimited data. The company, which calls itself the Un-carrier, offers one line for $70, two for $100, three for $140, and four for $160. All plans require auto-pay and these are the current general rates, not any special offers the company sometimes has.

Verizon has more complicated pricing. Its best price also requires auto-pay and its offers start at one line for $80, plus any fees and taxes. Two lines cost $140, three lines are $160, or four at $180, again with taxes and fees on top of that (which vary based on where you live).

This should help T-Mobile

In the most-recent quarter, T-Mobile added 1.1 million total customers, 914,000 of which were postpaid. That's the 16th straight quarter where the company has added more than 1 million subscribers. Verizon, on the other hand, lost 307,000 subscribers in Q1, down from a gain of 640,000 during the same period last year.

T-Mobile has been gaining partly because Legere's efforts to eliminate customer pain points are working. In addition, T-Mobile has improved its network and can actually thank rival Sprint for spending so much money advertising that all networks are pretty much the same now.

A superior network used to be the reason people would pay more to be a Verizon customer. T-Mobile has not only cut into that network edge, it has also given people lots of reasons to try its service with price being the most obvious one.

This latest deal gives iPhone and Pixel owners even more incentive to switch and more of them will. Legere may not be right in his claims that Verizon is having network problems (though he may be). He's correct, however, in the assertion that removing the hassle of trading in a phone (while also paying it off) will take away a reason some people put off switching.