Shares of airplane parts supplier Triumph Group (NYSE:TGI) skyrocketed yesterday, ultimately closing the day up more than 30%, or $7.40 per share. The question is: Why?

Triumph Group didn't provide a lot of detail on this in its actual earnings report, which contained mostly bad news -- sales half a percentage point short of Wall Street estimates, losses coming in at $2.57 per share, and guidance well short of expectations. But in its subsequent earnings call with analysts, management gave a bit more color on why things may be looking up for Triumph Group stock, and why recent deals with Boeing (NYSE:BA) and Bombardier (OTC:BDRBF) make it possible for Triumph to start winning again -- details that helped to inspire analysts at Vertical Research Partners to remove their sell rating on Triumph Group stock this morning, and upgrade the stock to hold.

Here are three things you should know about why they did that. 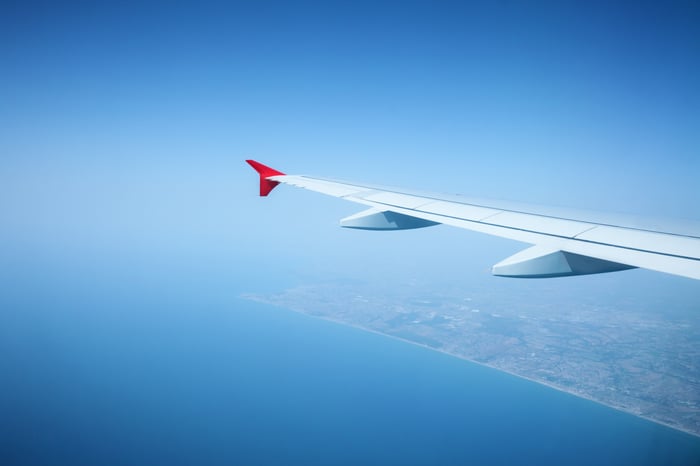 This story starts with Triumph Group's aerospace structures division, which provides more than 62% of the company's total revenue (and according to S&P Global Market Intelligence, is responsible for all of the company's operating losses).

Aerostructures, you see, is standing on the knife's edge of bankruptcy. One false move, and it will fall off. In acknowledgement of that, Triumph CEO Daniel Crowley informed analysts yesterday that Triumph has negotiated a "bank amendment" with its lenders that "provides covenant relief during our transformation." In particular, this amendment gives Triumph the option, if necessary, of commencing "voluntary insolvency proceedings within 90 days of the bank amendment" for its Vought Aircraft Division (aka aerospace structures).

That said, while bankruptcy is an option open to Triumph, Crowley explained that "the company does not anticipate and believes it is highly unlikely that it will voluntarily file insolvency proceedings with respect to the Vought entity." This is because Triumph has also negotiated "successful agreements" with its customers Boeing and Bombardier to "address the underlying causes of liquidity shortfalls" at Vought.

2. Boeing flies to the rescue

A few details on these deals were contained in a pair of press releases issued on Monday, and Triumph provided more in its earnings call. With Boeing, Triumph executed a memorandum of agreement "to increase productivity, reduce cost and enhance the value of Boeing products." Among the more concrete benefits, Triumph says it has "settled past claims and negotiated new prices, cash payments, and standardized terms and conditions that resulted in a win-win for both companies."

Actually, maybe "win-not lose as badly" would be a better way of describing the deal. Triumph says it has negotiated "more economical build rates on the 747." According to Crowley, while this won't result in a profit for Triumph, it at least ensures the company "loses ... significantly less money than it was before."

The deal with Canada's Bombardier seems similar, resolving "all outstanding commercial disputes between them, including all pending litigation." In particular, the agreement Triumph Group reached with Bombardier addressed "mutual concerns about wing deliveries, development costs, and recurring production costs" and "resetting" Triumph's relationship with Bombardier.

And one more thing...

So now we know a few more concrete details about what happened at Triumph Group last quarter. Of course, you can't get much more "concrete" than cold, hard cash -- and this may be the best news of all.

According to Triumph, the company generated cash flow from operations of $454 million last quarter. Much of that was of the ordinary variety -- selling stuff, and getting paid for it. But Triumph also collected "approximately $324.0 million of increases in customer advances" on work to be done in the future. Crucially, it appears that this cash came from customers other than Boeing and Bombardier -- but those two companies may be next in line to contribute cash to help keep Triumph's aerostructures solvent, and avoid the need for a bankruptcy filing.

We infer this because, during the earnings call, Crowley confirmed that although Triumph received hundreds of millions of dollars worth of advance payments in fiscal Q4 2017, "there was no cash related to any settlements in the quarter we just reported." Crowley went on to (not) confirm that such payments are forthcoming, saying, "We're not going to speculate on specific customer advances in the quarter. But ... we were able to obtain advances from [customers other than Boeing and Bombardier], and we hope to continue that process with other customers."

Translation: Boeing and Bombardier have not yet anted up, but they might.

That simple hint seems to have been enough to convince Vertical Research to upgrade Triumph Group stock this morning, and to inspire the stock rally yesterday. Whether this optimism will prove warranted may depend on whether the hoped-for cash really does arrive.