Please ensure Javascript is enabled for purposes of website accessibility
Log In Help Join The Motley Fool
Free Article Join Over 1 Million Premium Members And Get More In-Depth Stock Guidance and Research
By Steve Symington – May 25, 2017 at 5:59PM

The home-furnishings specialist can't complain after a decent start to 2017.

Williams-Sonoma (WSM -1.05%) announced strong first-quarter 2017 results on Wednesday after the market closed. After initially climbing more than 8% on the news, shares of the home-furnishings retailer drifted lower, to fall a modest 1% as the company reaffirmed its full-year guidance.
Let's take a closer look at how Williams-Sonoma kicked off the year, as well as what investors can expect from the company going forward. 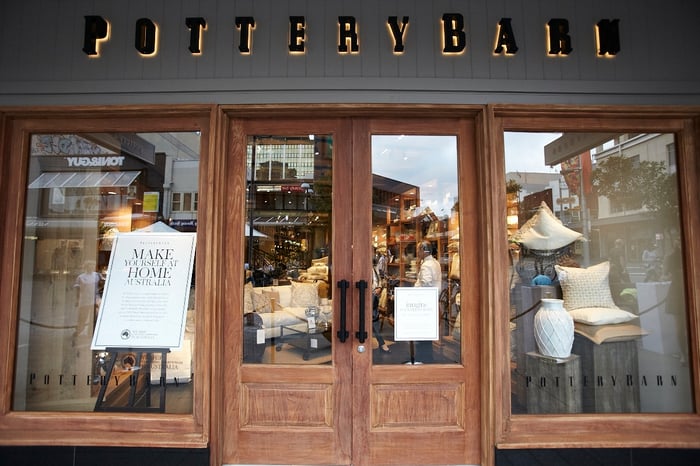 In the first quarter, we saw strong sequential improvement in the Pottery Barn brand, demonstrating the effectiveness of the brand initiatives that we are implementing. West Elm, our newer businesses (Rejuvenation and Mark and Graham), and our company-owned global operations delivered another quarter of double-digit growth, and Williams Sonoma started the year off strongly. We also continued to realize positive results from our supply chain initiatives, as we drive continuous improvements across the organization to deliver increased efficiencies and a superior customer experience.

For the fiscal second quarter, Williams-Sonoma anticipates revenue of $1.195 billion to $1.23 billion, assuming comparable-brand revenue growth of 2% to 5%. That should result in EPS in the range of $0.55 to $0.61. By comparison, investors were expecting earnings near the high end of that range on revenue of just $1.19 billion.

For the full fiscal year of 2017, Williams-Sonoma reiterated its previous guidance for revenue of $5.165 billion to $5.265 billion, which still assumes comparable-brand revenue growth of 1% to 3%. Williams-Sonoma also continues to expect adjusted full-year earnings of $3.45 to $3.65.

In the end, apart from the improvement at Pottery Barn, where comps declined 4.1% last quarter, there were no big surprises from Williams-Sonoma in this report -- and that's fair enough considering the company continues to operate in a relatively difficult retail environment. As long as Williams-Sonoma keeps achieving modest top-line growth, while making progress on its supply chain and operational efficiency initiatives, I think investors should be pleased with where it stands.

These 3 Retail Stocks Are Drop-Dead Bargains

Why Williams-Sonoma Stock Was Sliding Today