Please ensure Javascript is enabled for purposes of website accessibility
Log In Help Join The Motley Fool
Free Article Join Over 1 Million Premium Members And Get More In-Depth Stock Guidance and Research
By Danny Vena - May 26, 2017 at 7:27AM

Is the old guard or the young upstart a better buy for investors right now?

This matchup pits a staunch member of the old guard against a young upstart. American Express Company (AXP 1.29%) has been around since 1850, but it didn't begin to trade publicly until 1977. PayPal Holdings, Inc. (PYPL 2.23%) was established in 1998 and made a brief public debut in 2002 before getting bought out by eBay and then doing another IPO in 2015. The two companies provide financial services to consumers in the very broad payments sector.

American Express issues its well-known credit cards to consumers and acts as both card issuer and payment processor. The company also provides services including loans to merchants and receives a fee from every credit card transaction.

PayPal believes that everyone should have access to financial services, even those outside the mainstream. The company operates an open digital-payments platform that provides services to over 203 million account holders. Customers can use its services to make payments online, from a mobile device, through an app, or in person. PayPal also receives a cut of each transaction. 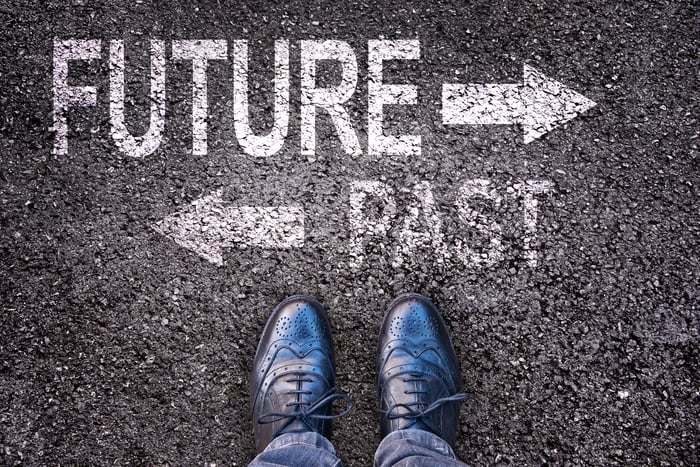 American Express is banking on its past, while PayPal looks to the future. Image source: Getty Images.

While they operate in the same arena, the companies have distinctly different strategies. American Express has a stable credit card business that provides a level of long-term consistency. It's in the process of consolidating its business, having lost several co-branded cards over the past several years, including its high-profile split from Costco Wholesale Corporation (COST 1.35%). At the time of the breakup, 10% of American Express cards were co-branded with Costco. The company has since looked to double down on its core business and is targeting new high-end cardholders.

PayPal, meanwhile, is looking to the future and bringing innovation to the payments industry, tapping into the trend toward digital payments. It's also benefiting from previously untapped markets by way of its Venmo social payments platform, which is a hit with millennials. Over the past year, PayPal has extended its agreements with global payment behemoths Visa Inc., MasterCard Incorporated, and Discover Financial Services to have its digital payments accepted across their credit card platforms. It also recently partnered with Alphabet Inc.'s Google to allow users to link their PayPal account to Android Pay, in a move into the digital wallet.

I prefer a company looking to the future than the past, which in this case is PayPal. 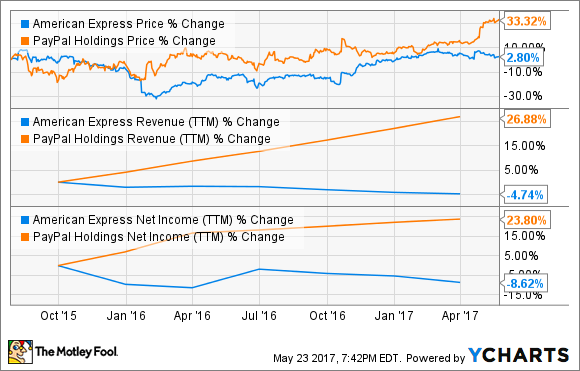 In its most recent quarter, American Express posted revenue of $7.9 billion, down 4% year over year. However, making a one-time adjustment for the discontinued Costco agreement, revenue increased by 6% over the prior-year quarter. Net income for the period, meanwhile, fell 13% to $1.2 billion, from $1.4 billion year over year.

In PayPal's most recent quarter, it reported revenue of $2.975 billion, up 17% from $2.544 billion in the prior-year quarter. Net income increased 5% year over year to $751 million, up from $738 million. Total payment volume for the quarter grew to $99 billion, up 23%. PayPal ended the quarter with 53 million customer accounts, and its Venmo platform processed $6.8 billion in total payment volume during the quarter, more than doubling its volume year over year.

When PayPal became a subsidiary of eBay in 2002 shortly after its first IPO, it left the public market. It began trading publicly again in July 2015, and since that time, the stock price of both PayPal and American Express has been a reflection of its financial performance. In its short public history, PayPal has done a better job pursuing growth.

But when it comes to returning capital to shareholders, American Express has done a better job. Since PayPal went public again, it has reduced its share count by 1.5%. Over the same period, American Express has reduced its shares outstanding by a whopping 10%, taking advantage of its share-price swoon in early 2016. It's also been paying a dividend that yields about 1.7%. PayPal doesn't currently pay a dividend.

There's no doubt that American Express has excelled in the area of shareholder returns. 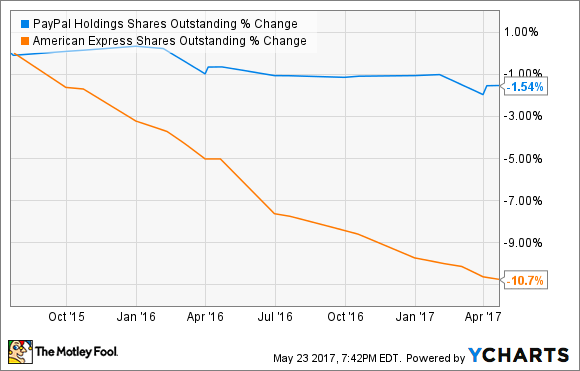 The final analysis depends on the focus of the investor. One looking for a company with a solid foundation, consistent revenue, and a dividend payout might think American Express is the better choice. For my money, however, a forward-looking company tapping into a technological shift toward digital payments has better growth prospects. My money is on PayPal.