Scour the rows of greetings cards, and one can be assured they'll find plenty of cards to celebrate 40th birthdays -- none for 43, though. And not just 40, but 50 and 60 and so on. We love round numbers. Really love them.

The market is no different.

Plenty of hoopla recently surrounded the Dow Jones Industrial Average (DJINDICES:^DJI) breaking 20,000 for the first time, and as of this writing, several headlines are addressing Bitcoin's first crossing of the $1,900 mark. How about gold? The yellow metal has never crossed the $2,000  per ounce threshold. The actions of central banks, weak global growth, and higher inflation could all influence the metal to climb higher, but let's dig into a not-so-far-fetched scenario that could lead it to break new ground. 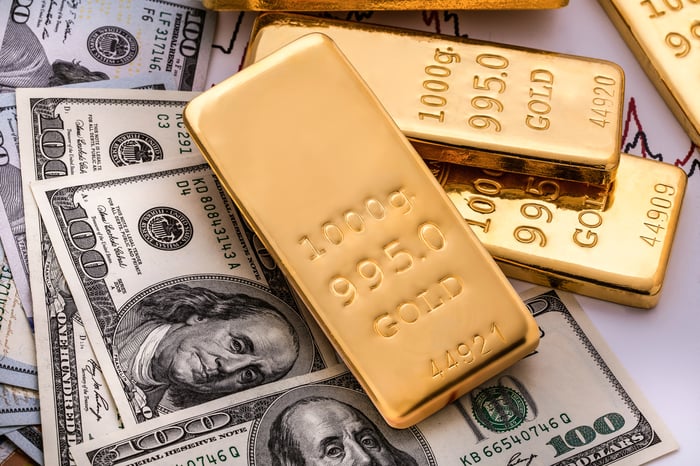 Fear and loathing in the U.S.

Love him or hate him, it's fair to say that President Trump has caused quite a stir during the first few months of his administration. Though this may bring joy to news junkies who enjoy pundits pontificating on nightly news shows, it also brings concern to the market. And when concern -- read: fear -- grows in the market, investors turn away from stocks and toward gold, sending prices higher.

Consider the week before Trump's trip to the Middle East during which he fired FBI Director Comey. While the Dow Jones Industrial Average and S&P 500 (SNPINDEX:^GSPC) fell 0.84% and 0.06%, respectively, the price of gold rose about 1.5%, according to the World Gold Council. 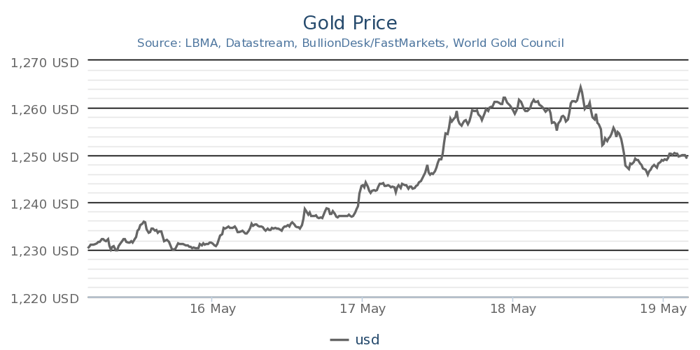 With the specter of impeachment rising from both sides of the aisle, more volatility certainly lies on the horizon. Granted, the president may never actually be impeached, but the Dow's nearly 400-point plunge illustrates how the fear of uncertainty can inspire major market movement in and of itself.

Following a rate hike in December 2016, the Federal Reserve raised interest rates this past March, illustrating its belief that the American economy is strengthening. And based on previous statements, the market anticipates two more rate hikes in 2017. Traditionally, a rise in interest rates has an adverse effect on the price of gold since investors will turn to higher-yielding vehicles than the yellow metal, which offers no yield.

Although the prevailing sentiment is that the Fed will raise rates twice more this year, there's reason to believe this may not come to fruition. According to USA Today, James Bullard, St. Louis Federal Reserve chief, indicated the strategy of raising rates twice more may be "overly aggressive."

Low interest rates often lead to higher gold prices, but If the rate hikes don't come to pass, the market may interpret this as a troubling sign -- a harbinger of a downward turn in the American economy. Consequently, gold prices would likely climb on the backs of investors' uncertainty.

Turning from green to gold

The weakening dollar could be a third factor that causes gold to rocket higher. According to the dollar index, the U.S. dollar has reached its lowest level in the past six months, and if this trend continues, it could inspire investors to flock to the traditional safe-haven investment. Measuring the U.S. dollar against several foreign currencies -- the euro, Japanese yen, Pound sterling, Canadian dollar, Swedish krona, and and Swiss franc -- the dollar index provides a glimpse into how the rest of the world perceives the U.S. economy.

What inspires bearish sentiment of the dollar? For one, the growth of the U.S. economy, or lack thereof, could result in the dollar losing ground to foreign currencies. According to government data, for example, the U.S. economy experienced meager growth in the first quarter of 2017: Gross domestic product (GDP) increased at an annual rate of 0.7%, its slowest pace in three years.

Although many economists suggest the economy is poised to rebound throughout 2017, the prospect a slowing U.S. economy should not be immediately dismissed. In the first quarter of 2017, consumer debt grew to $12.73 trillion, eclipsing the $12.68 trillion from the third quarter in 2008 -- and we all know know what happened then. Granted, student loans account for a larger portion of consumer debt now, not housing, but it stands to reason that if college graduates are busy paying off student loans, they're not spending money on goods and services, which could bolster the economy.

Uncertainty in Washington, the absence of interest rate hikes, and a fall in the dollar are all factors tied, individually, to the rise in the price of gold. Should these three factors all occur concurrently, however, it could create a scenario which results in market participants racing to increase their positions in gold -- a scenario that could very reasonably result in the metal breaking new ground, reaching $2,000.