These companies could put smiles on investors' faces for years to come.

Stocks of dental suppliers may not be top of mind for most investors, but trends support growth for this overlooked group. Aging baby boomers are needing more age-related dental work done. A growing middle class in emerging markets is finding dental care more accessible and affordable than ever before. And hey, you never know who is going to see your smile in that selfie some day.

With political uncertainties causing volatility in many healthcare stocks, dental stocks have been relatively steady due to the fact that much of dental care expense is borne by the patients themselves. Three stocks worthy of consideration by growth investors are Dentsply Sirona (XRAY 1.76%), Henry Schein (HSIC 1.06%), and Align Technology (ALGN 4.75%). 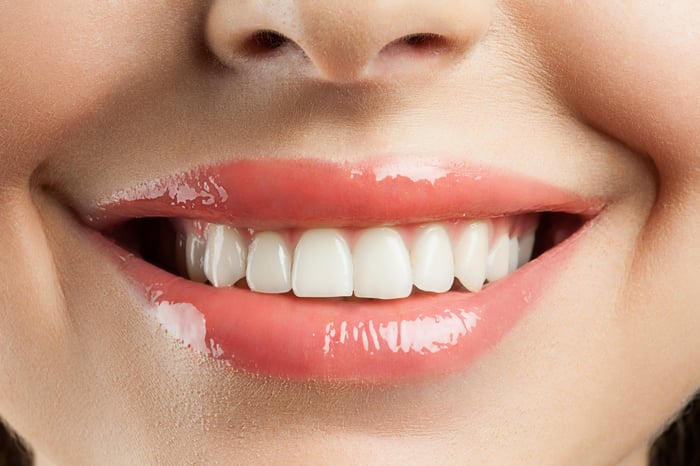 With a $14 billion market cap, Dentsply Sirona is the world's largest supplier of professional dental products and technologies. When you visit a dentist or orthodontist, it is likely you are surrounded by products made by this company, from the chair you are in, to whatever is in your mouth, to the sophisticated 3D-imaging system your doctor is using to figure out what's going on with you.

The company underwent a major transformation last year with the merger of two companies of roughly equal size: Dentsply, the leader in dental consumables, and Sirona, the leader in dental technology and equipment. Company leaders touted the cross-selling advantages arising from having the lines together in a single company, as well as cost savings.

The market liked the idea initially, but the stock price has been held back by some uncertainties. Adding to turmoil due to restructuring the business, Dentsply Sirona is ending its exclusive distributor relationship with Patterson Companies, resulting in channel inventory reductions that have hurt sales. It's clearly a good move for the long term to be selling through multiple distributors, but the consequence has been a temporary headwind to results that has hurt the stock and created a buying opportunity. Sales increased 17% in Q1 thanks to the merger, but neglecting the effect of acquisitions and divestitures, "internal" sales fell 4.7%.

With innovations such as the CEREC 3D scanner, which enables restoration work like crowns in a single visit, and a great worldwide market share position, Dentsply Sirona is a good way for investors to participate in growth of the market. Guidance for non-GAAP EPS in 2017 is $2.80 to $2.90, giving a reasonable forward price-to-earnings ratio of about 22.

Henry Schein, which also has $14 billion market cap, is the largest distributor of healthcare products to office-based dental, animal health, and medical practitioners. Its dental distribution business is 48% of sales, and the company has No. 1 market share positions in North America and Europe.

Schein aims to be a full-service provider to its customers. Besides providing the full range of equipment and supplies needed by a clinic, it provides services such as training, office design, leasing, and practice management software. By establishing deep relationships with its customers, it has dug itself a moat that makes it hard for competitors to take away business.

The company's most attractive features as an investment are its consistency over many years and terrific management of capital. Since 1995, the company has delivered compound annual growth of revenue and EPS of 15%, and annualized share price returns of 19%.

Henry Shein has been adept at snapping up smaller players to fuel its international expansion, having made 12 acquisitions in the dental market and nine in animal health since 2011. The company has gotten good value for its money, with a return on invested capital consistently over 13% for many years.

Going forward, Schein will be the beneficiary of Denstply Sirona's change in distribution strategy, picking up that company's full line of equipment, including digital dentistry tools such as the CEREC scanner. That and other growth opportunities led management to guide to 2017 EPS of $7.17 to $7.30 per share for 2017, 16% to 18% growth on a GAAP basis and 8% to 10% growth excluding restructuring costs in 2016. The P/E based on this estimate is 25.

For gangbuster growth in the dental industry, investors need look no further that Align Technology. This company was flying below Wall Street's radar for years with single-digit growth rates, but the stock suddenly started accelerating in late 2015.

Align makes Invisalign brand clear plastic dental aligners as an alternative to traditional wire-and-bracket braces. The process is highly digital, with orthodontists or dentists making an impression of the teeth or using one of Align's iTero intraoral scanners so that Align can create a software model of the patient's mouth. The company makes an animation of the desired movement of the teeth during treatment, designs a series of aligners, and uses 3D printers to manufacture them for shipment to the dental professional.

Recognition of the advantages of clear plastic aligners over metal braces is driving increased market acceptance of the product. Invisalign aligners are practically invisible, an attribute particularly important to teens, 92% of whom believe metal brackets would keep them from fitting in with their peers, according to a recent U.S. survey. They also can be removed for cleaning and allow the patient to eat without food restrictions.

The growth of Align's business has steadily increased over the last year and a half. The company's top line grew 28% in 2016, and earnings per share soared 32%. First-quarter 2017 revenue blew through the company's guidance, up 30% year over year.

Not only is the number of doctors using the product increasing -- up 16% last quarter -- but those doctors are using Invisalign for increasing numbers of cases. The number of cases per doctor increased 10% in Q1. The hottest growth came from international sales, with case shipments up 41%; teenage cases, which comprise only 24% of the case mix but 75% of the potential market; and sales of scanners and services, up 47%.

Align Technology has plenty of opportunities ahead of it. According to management, it has a 7% penetration of the 5 million cases in its served addressable market worldwide. Even better, as the company's technology improves, more difficult cases can be handled with aligners. The company believes advancements will grow the served addressable market by 50% to 7.5 million cases in the next three years.

Align's growth doesn't come cheap for investors, as one might expect. The stock sells for 43 times analyst estimates for 2017 earnings, making it the most expensive option of the three.

Stocks of dental companies may not get the most attention from Wall Street observers, but there are at least three options worthy of consideration. Savvy investors may want to take a bite.