Bank stocks shot up in the immediate wake of the presidential election on hopes that the unexpected victory of a pro-business candidate Donald Trump would spur profitability in the industry. But with the controversies swirling in Washington, D.C., combined with legislative paralysis, investors have begun to reconsider how much banks will actually benefit under the new administration.

The optimism around bank stocks was spurred by two things, in particular. First, Trump vowed on the campaign trail to reduce the top corporate tax rate from 35% down to 15%. That would help banks more than any other industry, as JPMorgan Chase, Wells Fargo, Bank of America (NYSE:BAC), and Citigroup all rank among the 10 biggest corporate taxpayers in America. 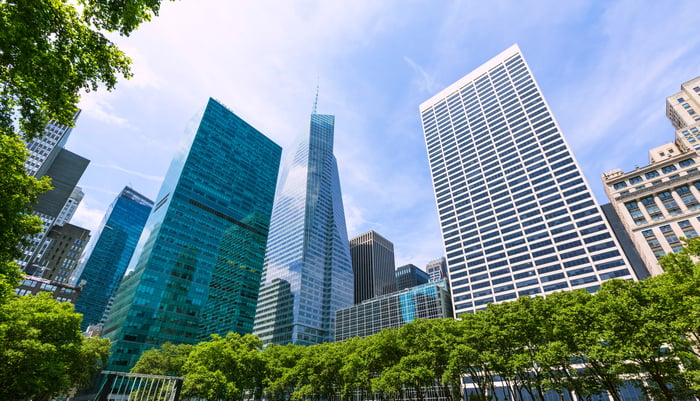 For Bank of America, for instance, this would have reduced the North Carolina-based bank's tax liability in 2016 by nearly half, or 48%, leaving $3.5 billion in additional net income to hit the bank's bottom line. That would make a huge difference, boosting Bank of America's net income by 19%, or approximately $0.35 per share, holding all else equal.

To be clear, there's a short-term downside to a tax cut from the perspective of certain big banks -- namely, Bank of America and Citigroup -- which have large deferred tax assets, which would have to be written down if taxes are cut. According to estimates, that would cost Bank of America somewhere in the neighborhood of $4.4 billion. But unlike the benefit, which would be recurring, this downside would hit the bank's balance sheet only once.

In addition to tax cuts, moreover, Trump promised to ease the regulatory burden on banks, which had been ratcheted up ever since the financial crisis. This would lower compliance costs and give banks much more operational flexibility to grow revenue and return capital to shareholders, all of which would boost profitability.

The net result is that bank stocks soared in the wake of Trump's unexpected victory. You can see this in the chart below, which compares the performance of the KBW Bank Index to that of the S&P 500, a proxy for the broader market, from the beginning of November 2016 through February of this year. 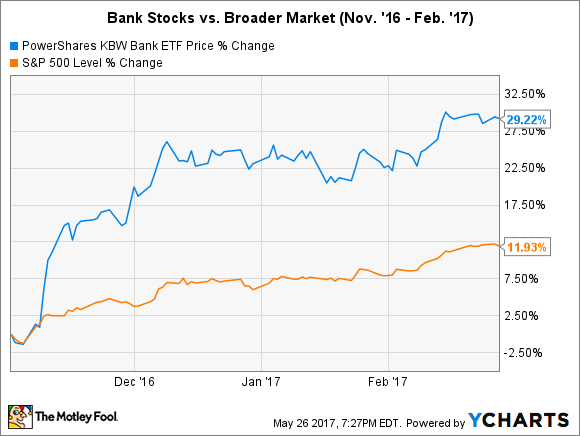 But now the tide has changed. With the Russia controversy consuming the White House, and all hopes for legislative victories on tax and healthcare reform reduced to a hope and a prayer, investors have become notably less optimistic about bank stocks. One could even go so far as to say that they're downright pessimistic.

You can see this in the chart below, which picks up where the first one left off -- spanning from the beginning of March through today: 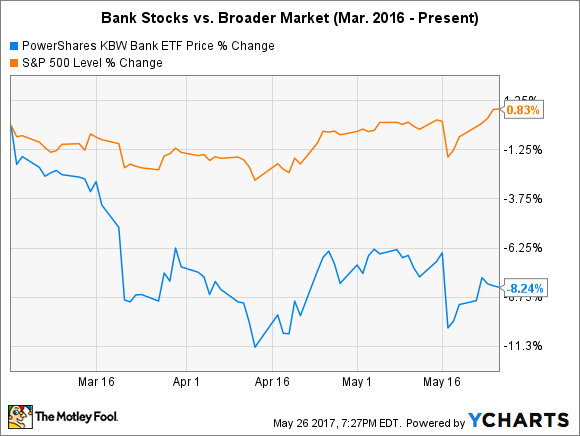 It remains to be seen, of course, how everything shakes out in the nation's capital. But if things don't get back on track soon, it isn't unreasonable to think that the more recent trend in bank stocks will continue to carry the day.