Investors in many popular names know how important China can be. For instance, Starbucks' recent earnings showed tepid U.S. same-store sales, but the company's China segment was much better. The stock rebounded after initially dipping after earnings, and the company plans to double its store count in China over the next five years. Similarly, Apple was a battleground for investors last year, with some, like Warren Buffett, buying the stock while Carl Icahn and David Tepper sold or trimmed their stakes because of concerns over -- you guessed it -- China.

This is because China has over 1.3 billion people, and a rapidly expanding middle class. Boston Consulting Group thinks China will grow consumption 9% per year through 2020, with the younger generation spending at even higher rates. With the largest population, an expanding middle class, and low household debt to GDP ratios, China's market is likely to be the most important consumer market for the foreseeable future. As such, investors should look at which brands are gaining traction in the Middle Kingdom.

This brand is excelling in China

Pandora A/S (NASDAQOTH: PANDY) -- the jewelry company, not the music streaming service -- is an interesting name excelling in China. The company hails from Denmark, and has been public since 2010. The company is known for its affordable charm bracelets, onto which customers add charms over time. Charms (usually silver) run anywhere from $35 to $100, but can cost more. The company has stores in over 100 countries and six continents. Pandora A/S had a rough last twelve months, with the stock declining nearly 30%. This has been due to its decelerating same-store sales numbers in its most developed markets: namely, the U.S. and U.K.

Nevertheless, the company is showing incredible rates of growth in China, a market it only entered in 2011. In 2015, Pandora signed a strategic alliance with Oracle Investment Group in Hong Kong to accelerate its store growth. In 2018, the agreement will end and Pandora will take over full distribution in the country. Since the agreement, Pandora has expanded its Chinese concept store base from 30 to 117 at the end of the first quarter of 2017. Year over year growth in China was 125%. Same store sales grew 25% in the fourth quarter of 2016, and the company recently opened up an e-store on the popular Tmall platform in October. Aided awareness, or people who know of the brand, increased from 35% in 2015 to 53% in China in 2016.

Pandora's China segment has been so positive that the company now looks to open 50 new concept stores in China this year, up from the 40 it had initially planned as recently as February.

What makes this interesting is that while the U.S. is still the largest overall consumer market by far, China is the largest jewelry market -- also by far, at over $100 billion, almost twice the size of the U.S.

Given all this, it is interesting that the company trades at only 12.5 times trailing earnings, along with troubled U.S. brick-and-mortar apparel companies.

The discounted valuation is due to the performance of Pandora's more developed markets, such as the U.S. and U.K., where it has been present the longest. Chinese revenue was only one third of U.S. revenue, and U.S. revenue fell by 10% this quarter.

That may seem like a lot, but it was also affected by the closing of hundreds of non-branded points of sale in the U.S. in the fourth quarter of 2016. Even factoring that in, same store sales including the U.S. e-store were down 3% in owned U.S. concept stores. The U.K., the company's second-biggest market, also showed negative same store sales due to the fallout from Brexit.

The reason for the decline is the difficult brick and mortar retail environment in both countries. The lack of foot traffic in malls is affecting every company with mall-based stores, including Pandora.

Despite being a jewelry company, Pandora A/S  trades at a valuation appropriate for a beaten-down apparel retailer. In contrast, luxury jewelry brands trade at almost double the price-to-earnings multiples of Pandora. 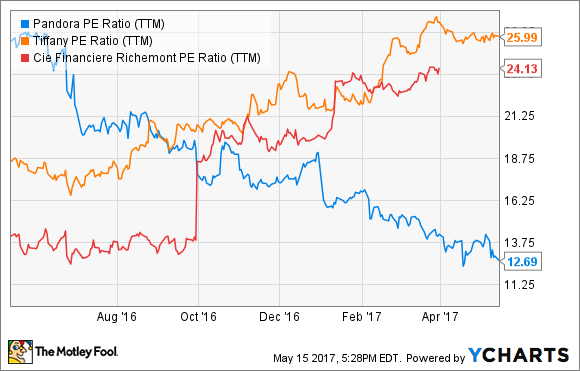 Right now, China makes up 8% of Pandora's sales, while the U.S. makes up roughly 25% of sales and the UK makes up 11%. The market seems to be extrapolating developed market performance to the rest of its global store base.

If, however, Pandora's China segment continues its torrid growth and reaches the same market share as in the U.S., the company's earnings will be much higher in the future, and the multiple could reflect stronger growth as well.

Pandora is trying to find a way to turn around its developed markets, which is a tall order these days. However, even with flat U.S. growth going forward, if the company continues getting China right its stock looks very undervalued.