Shares of Under Armour (NYSE:UA) (NYSE:UAA) have fallen about 30% this year, due to slowing sales, contracting margins, an exodus of key executives, and questionable decisions by management. With the stock trading at an eight-year low, some investors believe that UA is a good contrarian play -- but I believe that they're still wrong.

I've been warning investors about UA since last September, when the stock was still in the high $30s. Looking ahead, I still see the situation getting much worse before it gets better, for four simple reasons. 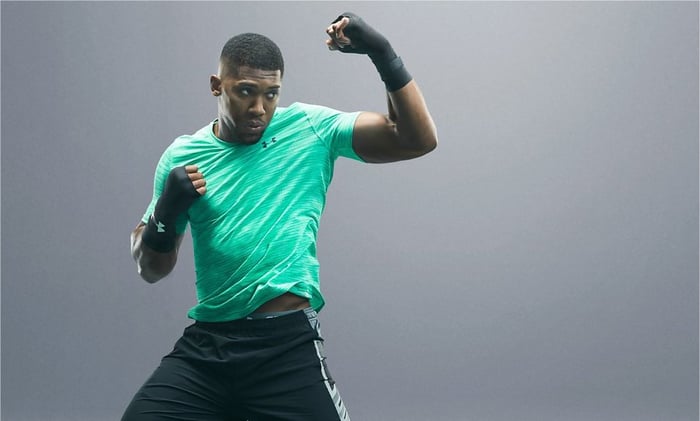 Under Armour's revenue rose 29% in 2015 and 22% in 2016, and is expected to grow just 11% this year. That slowdown can be attributed to tougher competition, the bankruptcy of Sports Authority flooding the market with cheap athletic apparel and footwear, and the company's high dependence on the sluggish North American market, where sales fell 1% annually last quarter but still accounted for 78% of its top line.

UA's revenue rose just 7% annually to $1.12 billion last quarter. 64% of its revenue came from apparel sales, 24% came from footwear sales, and 8% came from accessories. Apparel sales rose 7%, footwear sales improved 2%, and accessories sales grew 12%. CEO Kevin Plank claims that women's apparel is one of UA's "brightest opportunities for growth," but that can be a very fickle market -- as we recently saw with Lululemon's disastrous fourth quarter results.

The remaining revenue came from its smaller licensing and connected fitness businesses. Despite all the promotional hype UA poured into its connected fitness business to challenge Fitbit (NYSE:FIT), the unit's revenue rose just 2% annually and accounted for 2% of UA's top line. The unit also posted an operating loss last quarter -- which mirrors Fitbit's ongoing headaches in the wearables space.

Under Armour has repeatedly claimed that the growth of its overseas markets will offset the sluggish growth of its North American market. But that's only partly true -- UA's only real overseas growth comes from the Asia-Pacific region, where it enjoys both double-digit sales and operating income growth.

Its Latin America unit posted double-digit sales growth last quarter, but it also reported an operating loss due to macroeconomic and currency-related issues. Its EMEA (Europe, Middle East, and Africa) business posted a whopping 55% increase in sales, but its operating margin came in at just 1.6% -- compared to 22.9% in the Asia-Pacific market.

In the end, UA's growth in Asia couldn't offset its operating losses in connected fitness and Latin America, which resulted in the company's first-ever net loss.

Another major issue with Under Armour is its increasing dependence on lower-margin footwear instead of higher-margin apparel. This forces the company to spend heavily to keep pace with market leaders Nike (NYSE:NKE) and Adidas (OTC:ADDYY), which both have major advantages in terms of branding, sponsorship, and scale.

To remain competitive, UA aggressively boosted its selling, general, and administrative expenses, which rose 12% annually last quarter and accounted for 45% of its revenue. This strategy has caused its operating margins to contract over the past few years: 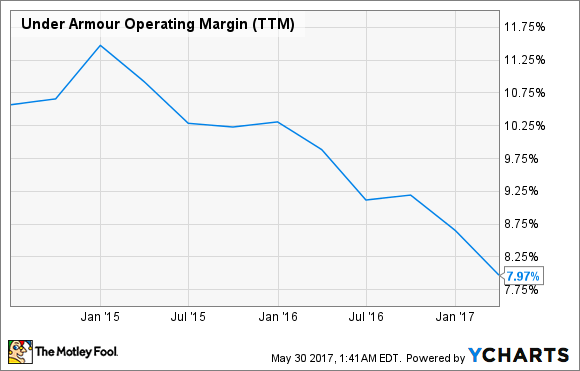 That's why UA posted a net loss last quarter. UA's earnings already fell 15% in 2016, and analysts anticipate another 7% decline this year. UA plans to counter that decline by hiking prices on high-end shoes, but that "premiumization" strategy relies heavily on UA's brand strength -- which could be wobbly after the disastrous reception of the Curry 2 and a PR debacle after CEO Kevin Plank's praise of President Trump. The proposed border tax could also cause additional pain, since UA manufactures most of its products overseas but generates most of its sales in the U.S.

Under Armour's growth figures wouldn't look too terrible if the stock traded at reasonable valuations. However, UA still trades at 49 times earnings -- which is much higher than Nike's P/E of 22, Adidas' P/E of 31, and the industry average of 22 for apparel retailers.

Looking ahead, Under Armour has a PEG (price-to-earnings growth) ratio of 1.9. Since a PEG ratio under 1 is considered "cheap", Under Armour still looks pricey relative to its earnings growth potential. It's also higher than Nike and Adidas' respective ratios of 1.8 and 1.6.

Under Armour still has a lot to prove before it can be considered a comeback play. It must widen its moat against Nike and Adidas, prove that its premiumization strategy can work, revive its North American sales, and expand its operating margins in other markets besides Asia. Unless UA can do all this over the next few quarters, its lofty valuations will catch up to the stock and cause further pain for its shareholders.