The latest big merger in the chemical industry spans two continents. Specialty chemicals manufacturer Huntsman (NYSE:HUN) will combine with Switzerland-based peer Clariant in a deal that both companies are touting as a "merger of equals." The new company will be known as HuntsmanClariant.

The merger will be effected in an all-stock transaction. Once it is completed, current Clariant stockholders will own roughly 52% of HuntsmanClariant and Huntsman investors will hold the remainder. Huntsman CEO and company namesake Peter Huntsman will serve as the merged company's CEO, while Clariant CEO Hariolf Kottman will be the chairman of the board.

The deal is expected to close by the end of this year. It is subject to approval by the shareholders of both companies and must be approved by the relevant regulatory authorities. 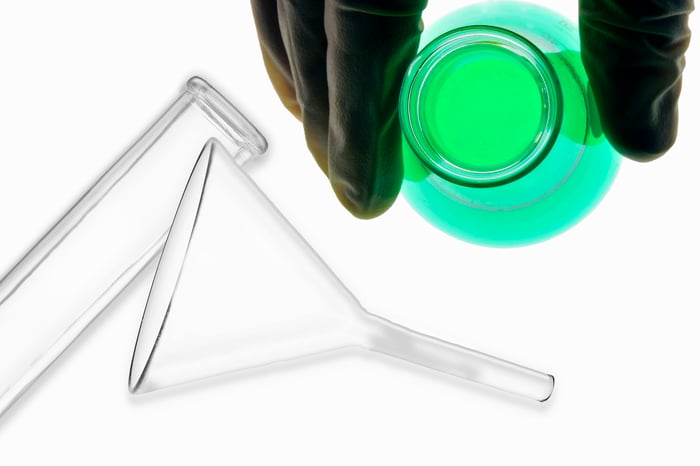 In their joint press release, Huntsman and Clariant say that they can achieve around $400 million in cost savings by teaming up. That's a realistic goal, as the manufacturing and geographic profiles of the two companies are broadly complementary.

HuntsmanClariant is going to be a big company. When fused together, the pair will have an enterprise value of around $20 billion. Once the cost rationalizations start to kick in, HuntsmanClariant could benefit handsomely from greater economies of scale, combined research and development efforts, and that expanded global reach. Huntsman has struggled with an eroding top line over the past few years. Perhaps joining forces will reverse that trend.

In the wake of the deal's announcement, Huntsman's shares dropped slightly, perhaps due to that estimated 48% shareholding in the new entity (which doesn't quite make it a "merger of equals"). But I feel that this is an appropriate tie-up of compatible businesses, and could therefore potentially deliver for shareholders. Considering that, it would probably be wise for Huntsman investors to hold on to their stock.