This small chemical industry churns out a product with dozens, if not hundreds, of uses, and the stock market has rewarded manufacturers with incredible returns. But can this streak of outperformance last?

It's in paint. It's in sunscreen. It may even be in some of the food you eat. And you've probably never heard of the companies that manufacture it, but they're red-hot right now. The top performer has gone up more than 750% since the beginning of 2016.

2017 is shaping up well for most of these companies, too. In July alone, four of the five saw double-digit growth. But before you jump into this scorching-hot market with both feet, there are some things you need to know. 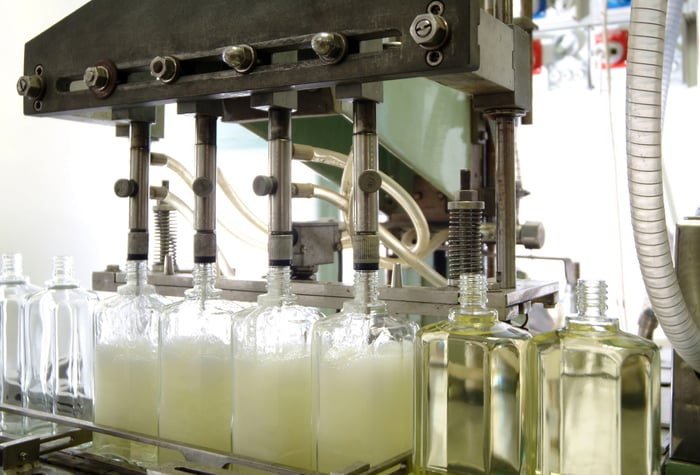 TiO2 stocks have been on an upward trend for the past year. The substance is used in paint and by the cosmetics industry. Image source: Getty Images.

The reason the TiO2 market has been so hot lately can be summed up in one word: paint. Although TiO2 is used as a food coloring, a UV blocker in sunscreen, and even a semiconductor, its primary use is as a white pigment. In fact, if you have a white wall or ceiling in your home, the odds are it gets its color from TiO2.

With the construction and housing markets heating up again after a prolonged slump, and the auto industry also performing well, the market for paint has improved. That has improved demand and prices for TiO2. Which is why the chart for TiO2 manufacturers since 2016 looks like this: 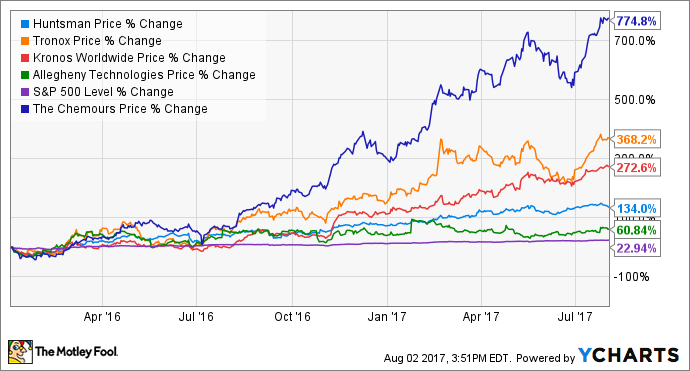 Yeah: The purple line at the bottom is the S&P.

But even in these 18 impressive months for the industry, July 2017 was a particularly strong one. Allegheny Technologies was up 11.3%, Kronos Worldwide was up 17%, Chemours was up 25.6%, and Tronox was up an astonishing 28.2%. The only laggard was Huntsman, which rose just 3%, barely ahead of the S&P.

In the case of these stocks, only one of them got a boost from company news in July. Allegheny Technologies announced a new long-term purchase agreement with Pratt and Whitney, which caused its stock to jump. It's also possible that Tronox benefited slightly from its announcement of increased soda ash prices toward the beginning of the month. But mostly, these gains just reflect confidence in the global TiO2 market.

When an industry gets hot, the rising tide tends to lift all boats. The U.S. construction market has been expanding in recent years, and is expected to continue to grow throughout the year. Meanwhile, the U.S. automotive industry had a record year in 2016, beating the previous sales record set just a year earlier. Because of TiO2's importance as a paint pigment, the construction and automotive industries are the primary customers that drive its sales.

And that market is expected to continue to grow as more cars and homes are built and sold.

The problem with cyclical industries is that when that hot industry cools off and stock prices begin to fall, investors are left holding the bag. And TiO2 is no exception. Here's a chart showing the stocks' performance since Tronox was first listed on the NYSE in 2010. (Chemours doesn't appear on the chart because it was only spun off from DuPont in 2015.) 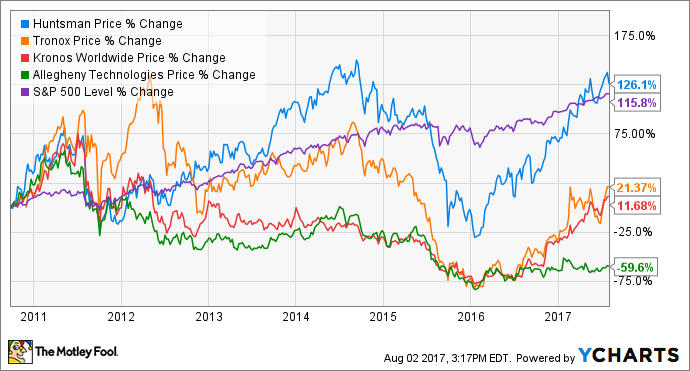 2015 was a terrible year for TiO2; one of the reasons 2016 was so fantastic was that the market bottomed out in early January of that year. Most of the stocks still haven't recovered from their 2014 highs, and only Huntsman has outperformed the S&P 500 over the last seven years -- and just by the hair of its chinny-chin-chin.

Worse for these companies, most had to take on massive amounts of debt to survive in the volatile industry. Take a look at their ratios of long-term debt to cash on hand:

The TiO2 market is expected to continue to grow, and these TiO2 manufacturers' share prices will almost certainly continue to climb as well. But what's good in the short term isn't always good for the long-term investor. The companies' poor balance sheets, as well as the volatility of the industry, means that despite their phenomenal returns so far this year, smart investors should probably look elsewhere.