Please ensure Javascript is enabled for purposes of website accessibility
Log In Help Join The Motley Fool
Free Article Join Over 1 Million Premium Members And Get More In-Depth Stock Guidance and Research
By Jason Hall – May 30, 2017 at 4:20PM

Today's announcement that ENSCO PLC is acquiring Atwood Oceanics could be sending ripples through the industry.

Shares of in-trouble offshore driller Seadrill Ltd. (SDRL) had sunk 12% for the day at 3 p.m. EDT on May 30. They're now well into penny territory, at less than $0.50 per share.

Today's big price drop is probably a reaction to a few things. First, most offshore drillers were down today, as oil prices have continued to fall since mid-last week. With Seadrill in the midst of negotiations with its debtholders to restructure the company and its debt, its shares are almost always going to be more volatile on days when its peers are moving big, as many are today. 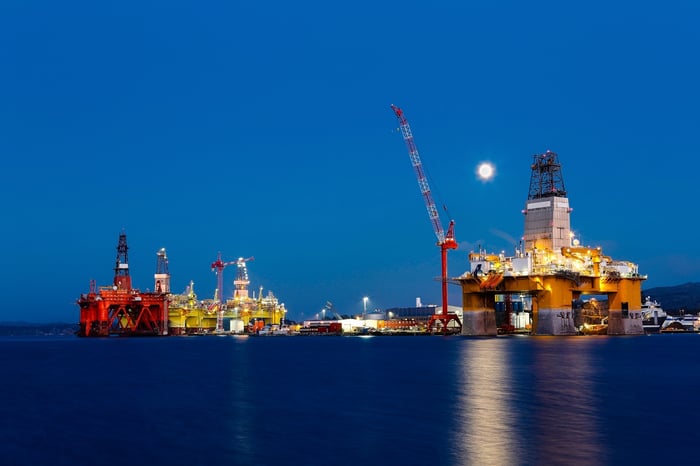 While there haven't been any rumors, it's possible some Seadrill shareholders have been holding out hope that the company would be acquired, saving investors from the outcome of getting wiped out by bankruptcy -- a likelihood that increases with each passing day at this point.

Furthermore, Atwood is also a relatively small company, making it a much more likely target than the much bigger Seadrill.

It was also reported over the weekend that Seadrill had dropped out of the running for a multi-year, multi-vessel drilling contract. That news also probably played some role in today's big sell-off.

While it may be tempting to buy shares of Seadrill today after this big drop -- especially if you're willing to take on the risk -- it doesn't reduce your risk for permanent losses. At this stage, the writing is on the wall that Seadrill is headed for major reorganization that will wipe out most, if not all, of common shareholders' equity.

If you're looking to take on some risk in the offshore industry after a sell-off, ENSCO may be a better place to look. Shares are down 5% following today's acquisition announcement, and frankly, its move to acquire Atwood Oceanics looks really smart.

It will probably take some time for the benefits to hit the bottom line, but a few years down the road, it should work out well for ENSCO shareholders, and for Atwood shareholders who take shares of ENSCO when the merger happens.