Please ensure Javascript is enabled for purposes of website accessibility
Log In Help Join The Motley Fool
Free Article Join Over 1 Million Premium Members And Get More In-Depth Stock Guidance and Research
By Beth McKenna – May 30, 2017 at 11:38AM

Here are the likely reasons for the 3D printing stock's great performance so far in 2017.

3D Systems (DDD 6.89%) stock is up a whopping 70% in 2017 through May 25, though the company remains unprofitable on the basis of generally accepted accounting principles (GAAP). Main rival Stratasys and the smaller pure-play 3D printing stocks that are listed on major U.S. stock exchanges are also partying like it was... 2013.

Below are the likely (and somewhat interrelated) reasons behind 3D Systems stock's rise this year. 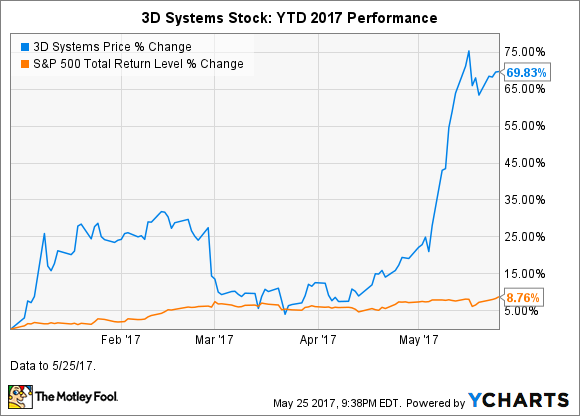 As you can see in the above chart, the bulk of 3D Systems stock's year-to-date gain has come in May. The impetus behind May's rise was the company's release of its first quarter 2017 results on May 3, which I'll explore further below. Investors were initially disappointed, which we can likely attribute to adjusted earnings per share (EPS) of $0.06 coming in lower than the $0.11 Wall Street was expecting, resulting in shares closing down more than 3% that day.

However, shares started their sustained rise the following day after the Piper Jaffray and Jefferies analysts who cover the stock made some cautiously optimistic comments and raised their stock price targets. The price target increases were nothing to cheer about: The Piper analyst, who maintained his underweight rating on the stock, raised his share price target by $0.50 to $11. The Jefferies analyst, who maintained his hold rating, raised his target by 17% to $17.50. 3D Systems stock closed at $16.08 the day earnings were announced -- which means that Jefferies believed it was overpriced even at that time -- and is priced at $22.03 as of Friday. In the first quarter, these key financial metrics moved in the right direction compared with the prior year's quarter:

A big positive, however, is that 3D Systems is generating more cash from operations, and is generating positive free cash flow (FCF), despite GAAP earnings being negative. FCF is arguably a better measure of how well a company is performing than "earnings," which are simply an accounting measure.

When 3D Systems released its Q4 2016 results in February, it provided full-year 2017 guidance, which it reiterated when it released Q1 2017 results.

Additionally, management expects to continue to generate positive cash flow from operations in 2017.

While 2% to 8% projected revenue growth isn't robust, it will still be better than the 5% year-over-year revenue contraction that 3D Systems experienced in 2016. (Revenue contracted about 2% if we exclude consumer products, which the company discontinued.) Adjusted EPS is expected to continue to improve and, notably, GAAP EPS is expected to be positive for the full year, whereas it was negative in 2016.

Compelling competitors entering the market means that 3D Systems will be facing more competition, but it's also a validation that 3D printing is an attractive business to be in.

There is reason for cautious optimism given 3D Systems' recent performance and guidance. However, investors should remember that guidance is just that. At this point, 3D Systems is still struggling to grow organic revenue and it's still unprofitable on a GAAP basis. On the plus side, however, it's generating decent cash from operations and free cash flow. In fact, its FCF for the trailing-12-month period is the highest it's been since early 2013. The stock, however, is rather pricey given its recent run-up: Its price-to-FCF ratio is 62.7, and its forward price-to-earnings (P/E) ratio is 42.8.