Royal Dutch Shell PLC (NYSE:RDS.A) (NYSE:RDS.B) is one of a small number of global giants in the oil and natural gas industry. It's also one of the best income plays in the space, sporting a dividend yield of around 6.7%. Even if the outlook for the integrated oil and gas industry is mixed, there are some great reasons why income investors could find that Royal Dutch Shell is a gold mine. But there are the two important questions to ask first: How did we get here? And where do we go from here? Let's dive in.

How'd we get here?

Shell's yield has historically been toward the high end of the industry in large part because its return on capital employed, a measure of how well a company invests its shareholders' cash, has tended to lag its integrated oil & gas peers. Just to give a comparison, shares of ExxonMobil (NYSE:XOM) yield around 3.8% and Exxon has consistently been at the top of the group for return on capital employed. 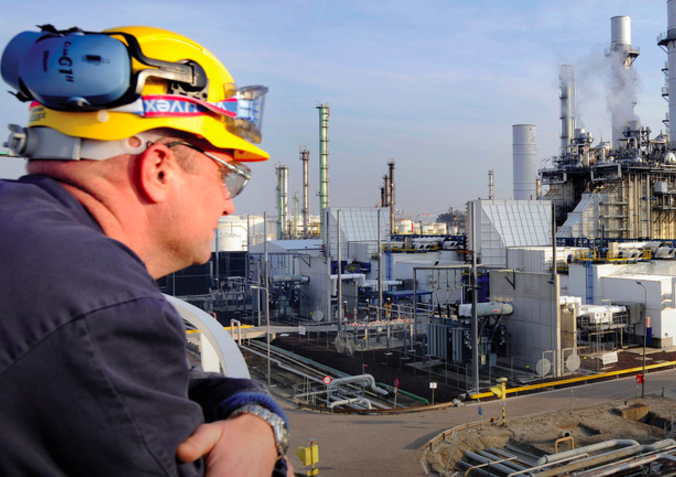 But another prominent piece of the puzzle was the company's decision to buy BG Group in the middle of the oil downturn. While others were selling assets or making smaller, bolt-on deals, Shell jumped in with both feet and made a purchase for over $50 billion. That deal increased Shell's debt by 50% in a single year while its business was struggling along with every other oil major. It's understandable that investors have been worried.

Now add in the fact that Shell hasn't increased its dividend since the start of 2014. Moreover, it's been paying a scrip dividend since the first quarter of 2015 in an attempt to preserve cash -- that was before the BG deal was consummated in 2016. These are not the signs of a great dividend investment.

Royal Dutch Shell, however, isn't naive to the concerns weighing down its shares and pushing up its yield. High up on the agenda is paying down debt, which it's already started to do. For example, it has sold or inked deals for around two-thirds of a planned $30 billion worth of asset dispositions. That money is largely being put toward debt reduction. Long-term debt peaked at roughly $86.6 billion in the third quarter of 2016, but was already down to $83 billion by the end of the first quarter of 2017. That may not be a huge change (a touch over 4%), but it's a clear sign that the company is moving in the right direction. 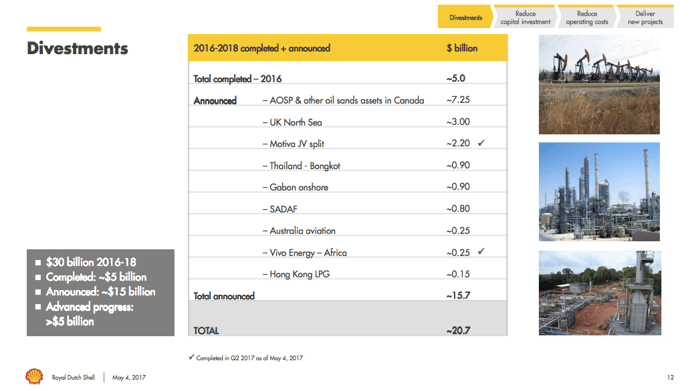 And even with that heavy debt load, long-term debt only makes up around 30% of the capital structure. That's high compared with hyper-conservative Exxon, where long-term debt makes up under 15% of the capital structure, but it's not all that high on an absolute basis. Then you have to consider the $19.5 billion in cash that Shell is holding, compared with just about $5 billion at Exxon. Debt is an issue for Shell, but really not as big a concern as it may at first appear.

Furthermore, the company has gotten itself back into the black with enough cash flow to pay down debt and cover its dividend commitments. Equally important, however, Shell's return on capital employed has ticked up since the acquisition. And it's started to close the traditional gap with its competitors. 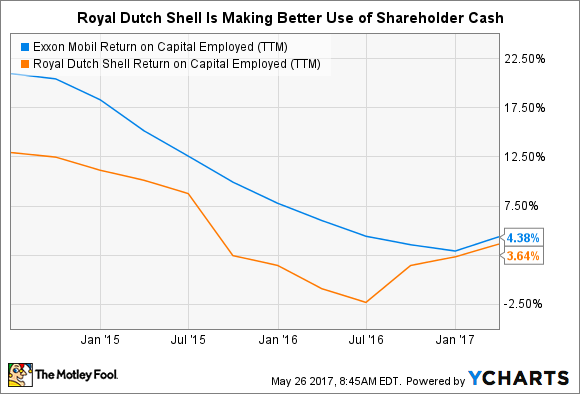 So it looks like the calculated risk of buying BG Group in the downturn, which expanded its business in the natural gas and offshore oil segments of the industry, was a prudent move. Investors will increasingly see evidence to this as the company's debt balance gets lower and lower. It's just going to take some time for Shell to improve its financial foundation -- something that's going to happen pretty much regardless of the price fluctuations in the oil market.

This is, then, a great opportunity for investors who are willing to take on a little uncertainty in the near term for a long-term benefit. The best part, however, is that you'll get paid handsomely for waiting around while management does what it needs to do to lower the debt load and improve the overall performance of the business. And in the process, as the security of the dividend increases, jittery investors should calm down. All told, you have an opportunity to lock in a fat yield and get some capital appreciation thrown in for good measure.